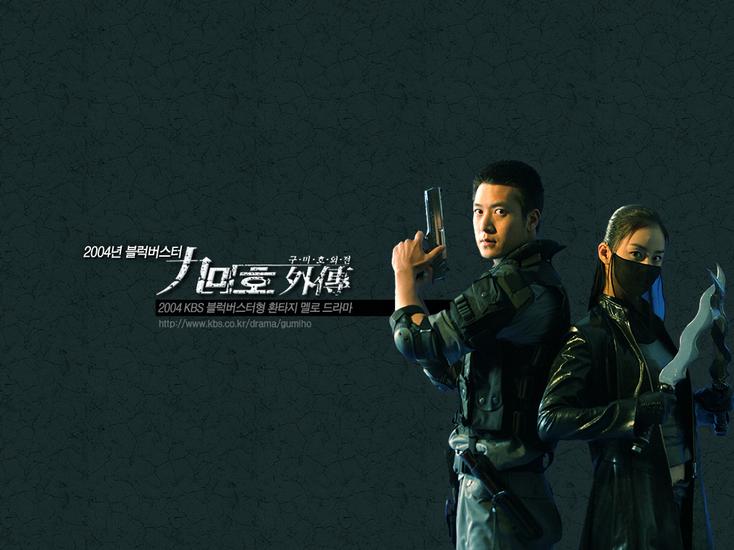 This drama series was produced with a hope of bringing the young generation back to television as it successfully combines the elements of action horror with those of a tragic melodrama. "Forbidden Love" depicts a fight between two different species: humans who at times act inhumanely, and non-human creatures who can be more compassionate than human beings.

This drama is based on a legend about a fox with nine tails that loves humans but is eventually betrayed by them. While presenting the modern version of a tragic love between a human and a fox with nine tails – two species that can never coexist, this drama also tackles such contentious issues as the moral aspect of genetic manipulation, social and economical costs associated with a longer lifespan, and human cloning.

TrekkienotTrekkor Sep 28 2016 2:21 pm I watched this show a while back, and I rediscovered it after searching for the ost. I cannot believe I forgot about this drama series. The plot is amazing, the casting is A+, and oh em gee the love story. I seriously feel for these characters, and I really like how they made the nine-tails into a race. It was an interesting take on this legend, and one that I hope will be remade. I don't like the comedy nine-tails that they have nowadays. The cast will be hard to match, but it would be interesting to see how they remake this (if they ever decide to). Honestly....the cast for this drama have not aged at all (except the kids), so I feel like they will be able to cast them again.

Avi May 20 2016 4:26 am just realized that jo hyun jae and kim tae hee who were half siblings from yong pal played the role of lovers in this drama. quite interesting. might watch this one in the near future.

birangskie Oct 22 2015 6:49 am This is the first Korean drama I've ever watched and till now I'm going crazy with the Korean drama.

Heman Jun 14 2014 5:06 am I loved your movie and I hope you could add more episode and made me drew to tears .All from me Heman .Thank you

chocnut21 Feb 24 2014 3:18 pm This review is my assessment for my crush Kim Tae Hee at her role here in Forbidden Love along with the TV series itself..

..i hate this drama because it has less kissing from Kim Tae Hee lol j/k all kisses (or no kisses) aside, this is a very solid action-drama lovestory kdrama

- i honestly enjoyed IRIS action scene more than Forbidden Love, but it doesnt mean this did not delivered. the action scenes are magnificent, it's just bugging me that humans can fight foxes with their own hands (not much use of guns or whatever), and the minor lapse from Min-Woo wherein Chae-Yi can transform her body at ep.5(?) then he accused Shi-Yeon of killing his workmate Se-Kyung. that's the only flaw action-wise

- Love Story in Harvard is Kim Tae Hee's best imho if dramas are concerned. it's a tear-jerker, really. This one is stronger in love triangles and actions than dramas. Strong point for Forbidden Love (compared to LSiH) is the 2nd man Moo-Young has deeper roots and chemistry compare to KTH's 2nd man at LSiH

- i liked Detective Moon's character here. Min-Joo and Chae-Yi also has effective acting as both of them annoyed me enough. one is stupid, one is a stubborn antagonist

- overall in my opinion, KTH fans can enjoy Forbidden Love more than IRIS, as IRIS is more of a leadman-centric (Hyun Bin) series, not to mention characters are more dynamic and hideous, and the ending wasnt as bad as IRIS tragedy-wise. My Princess is cheesy, light, cute, funny rom-com series, but that is nothing compared to Forbidden Love. i must say i enjoyed this second to Love Story in Harvard, i dont know why, i felt like Forbidden Love is a jack of all trades, but is capable of a one-seater overall.

- note, i did not watched Jang Ok-Jung, as i am not a Korean, i might find it confusing for me, i do not know no history from them

Dianne Dec 22 2013 5:30 am What a fantastic action and romance drama that ended the only way it could end... even if it was sad. Jo Hyun Jae is one of my most favorite actors that I'm trying to watch as many of his dramas and/or movies that I can find online. There is something about his gentleness and soft heart that shines out even in violent and action-packed dramas like "Nine Tailed Fox" ... The more I see his performances, the more I like his versatility in the roles he chooses. Kim Tae-Hee is a natural talent with grace and beauty. I almost didn't recognize Uhm Tae-Woong, though; as he looked so young in this performance! Contrary to JHJ who never ages, UTW hasn't aged well, though he's still a nice looking man! Even though it took me a while to find a server who offered a decent video to watch, I'm glad I stuck to my goal of watching NTF all the way through! Thanks to all for the great memories ...

sashieng Jul 03 2013 3:47 am --i love this drama..its my first time watchiing kdramas acted by KTH as a leading character..since then i am watching all KTH dramas and of course his leading man here.

I on the other hand really enjoyed this drama. It was of the first kdramas I ever watched so it has a special place in my heart. I LOVE the soundtrack! Especially the main song. Only problem...I wish it had more Uhm Tae Woong.

gsc Dec 05 2011 6:38 am very boring movie...it's a waste of time and money watching it.. eventually kim tae-hee acts better in mivie 'my princess'. very disappointed to watch this movie. n i really hate the role of Jo hyeon-jae. now i avoid many korean movie acts by him.