Flower of the Queen 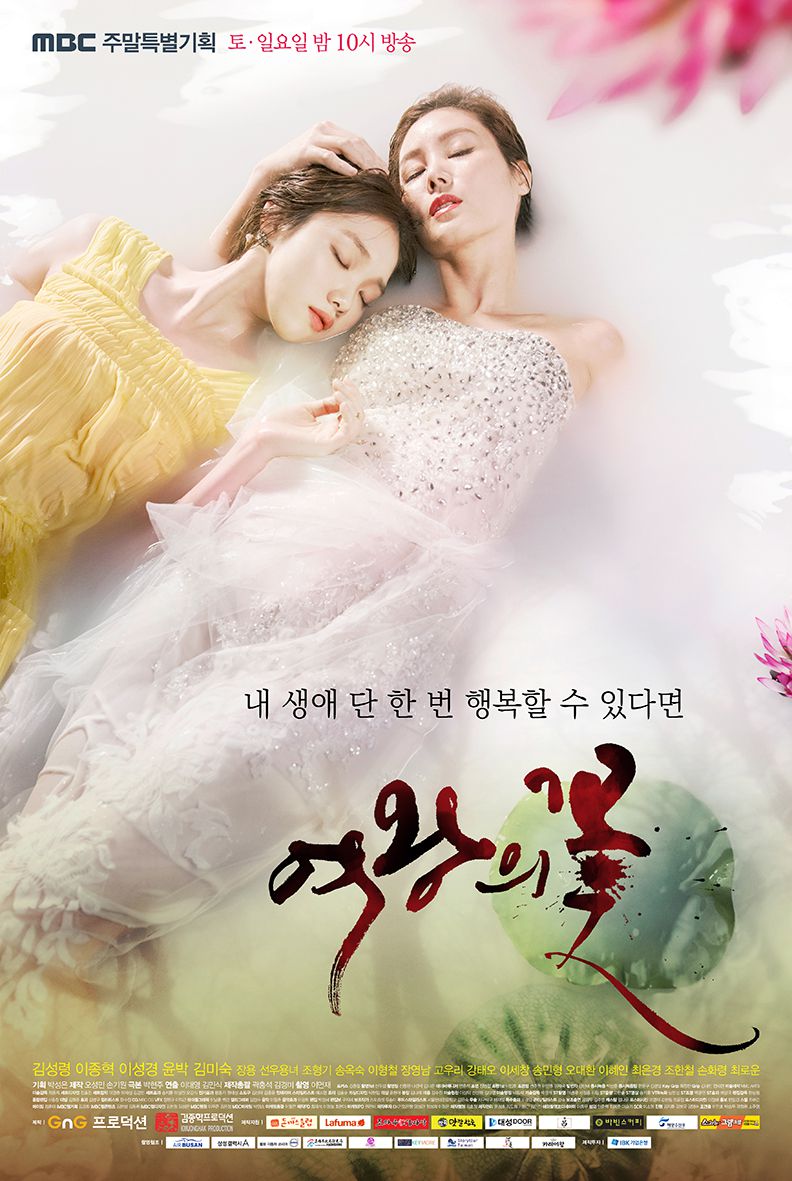 Rena Jung (Kim Sung-Ryoung) is a beautiful, but ambitious star chef who hosts her own cooking show. Park Min-Joon (Lee Jong-Hyuk), is the first son of a family that runs a large company. He appears like an arrogant man, but he is a lonely man on the inside. He is attracted to Rena Jung.

In the past, Rena Jung abandoned her daughter for a chance at success. Her daughter was adopted when she was just a baby. Now, her daughter, Kang Yi-Sol (Lee Sung-Kyung), appears in front of her.

Park Jae-Joon (Yoon Park) is Park Min-Joon’s younger stepbrother. He is popular with women and attracted to Kang Yi-Sol.

saranghae Aug 23 2020 11:48 pm i could only finished this drama cz i skipped more than half of each epi i wasnt interested in the plot at all from the beginning very predictable and lack of big twists even an ex miss korea couldnt save this drama she is very beautiful tho and acting is good too my ratings 3/10 with no recommendations

kiwi Aug 19 2017 8:41 pm I have just finished watching this. Bravo for the team! Good ending. KSR was amazing. And LJH, (Min Joon) was the best actor. Without doing too much in his acting he succeeded to deliver strong feelings. I prefer a natural acting than exaggerated acting. He was so manly and tender. His gaze can mel every body's heart. The young fresh actress Ko Woo Ri acted very well and released the tension in the drama. KTO matched more with KWR than LSK. I am smiling now but did cry a lot when the Lena and Min Joon were parted.

kiwi Aug 06 2017 9:53 am I love KSR and LJH. The couple leads the drama to be watched. I have discovered LSK. She is very natural. I started to watch this drame because of Kang Tae Oh, he is so cute in this drama for acting as young nice and innocent man. I am at episode 15 and will finish this drama. I hope that the group 5urprise will make a come back with another song. Miss KTO and other members of this group. I also hope that he will get a leading role in a drama like Forever Young 1.

cathy Sep 09 2016 3:11 pm I just watched this. Ahhh Kim Sung Ryung is amazing! she should've won an award for this. She SLAYED every scene! The tension and chemistry between Rena and Min Joon is so good <3 I love them! love this drama! One of my faves definitely.

jessica Dec 30 2015 6:02 am im just finish this drama and i love it so much. The chemistry between Rena and Park Min Joon is so good.

alyn Oct 01 2015 12:52 am queen flower is very nice story..i have many cry when i saw the series drama ..kim sung ryung is my best actress idol in korean drama..i hope you make more korean drama.

arizonagirl Sep 20 2015 4:08 am The little girl that plays Rena (Lee Chae Mi) - is so adorable. I just want to hug herr she is so cute. I have seen her in a few dramas. She was so good in Two Weeks as the sick little girl.

Geez....that Hee Ra and Hye Jin just don't give up. They just keep on pushing for what they want.

I thought Jae Joon's father was going to find out the truth about him, but I guess he didn't. Unless it comes out somehow later.

floreina Sep 03 2015 7:15 am I started to wach this drama but I skipped and watch just the story of Jae Joon and Yi Sol. I really like this couple! They're so cute!

Mia Sep 01 2015 5:55 am I'm still on the 11th episode and this drama already gives me stress. I really hate Rena so far I would punch her on the face if I could. This drama is full of emotions, really like it so far even though I might break my laptop if those evil ladies continue to behave like thisx) Oh and I dont really like Yoon Park's acting, it's so obvious and idk..

Nat Aug 27 2015 5:13 am Seriously I don't understand why would it matter so much that Lena's mother was an ex-convict. Like maybe she'll be affected a little, but not so much as to 'ending her whole happiness'. Other than that I find this drama pretty interesting.

They could've made the secret behind her birth much more hideous!

The two mother witches never give up. I hate them both.

Rose Aug 02 2015 1:43 am In Tae-Soo's family - the only two people that get along and respect each other is Jae-Joon and Min-Joon. But airhead Hee-Ra can't figure this out in her crazy insane quest to make sure Jae-Joon inherits a company he does not want, and is intent of getting rid of Min-Joon off the face of the earth. Min-Joon, from what I can see, treats his piece of work step-mother (Hee-Ra) with respect and stays out of her way. Hee-Ra has a mental problem and needs to be committed.

Wow - wasn't drill sergeant Hye Jin surprised to find out about Eun Sol. Tsk Tsk. She needs to be committed along with Hee -Ra. Then the world will be just fine.

Jamse Jul 05 2015 5:22 pm Sorry, misogony (hate typos). Continuing on, the women are monsters and the men weak willed saps who are constantly manipulated by them. Good drama, but seriously one dimensional.

jamse Jul 04 2015 6:05 pm Man, throw a rock and you hit a half dozen or so female characters on this show who are depicted as greedy, avaricious monsters who will destroy anyone who gets in their way. Some serious misogony going on here with the writers.

CoCo Jun 19 2015 5:48 am Weird! And VERY suspicious! I'm up to episode 23 & have noticed that Min-Joon & Rena have not ONCE kissed on the lips! (!?!) I wonder why? Only once did they look like they were going to and then right @ the last moment, the shot cut away to a different angle from the back (!?!) It's the first time I've ever seen such a thing on k-dramas! I wonder, do the actors not like each other or is the female actress refusing to kiss the male actor? Even @ their wedding he kissed her on the cheek!

I find that so bizarre.... Other than that (& all the over-the-top hysteria & evil schemes floating about), I've been pretty hooked on this drama. :o)

Rose May 19 2015 1:45 am Yoon Park (Jae Joon) is a very talented actor. His role in this show is so different from What's Happened To My Family. He looks different with his hair on his forehead and his glasses. He is like a young kid in this show. Very good looking. Two good parts back to back. Good for him.

kpoplover Apr 25 2015 1:01 pm I love this drama! btw does anyone know the song that plays whenever yi sol and jae joon are together? i heard it on ep 9 when both of them were talking in the car and i love it but couldn't find it anywhere :/ plz help me ASAP :*

kpoplover Apr 25 2015 11:03 am I love this drama! btw does anyone know the song that plays whenever yi sol and jae joon are together? i heard it on ep 8 when both of them were talking in the car and i love it but couldn't find it anywhere :/ plz help me ASAP :*

rye yan Feb 16 2015 2:54 pm wow ha infairnes to Yoon Park after his drama as a doctor in Whats happen to this family knowing that drama runs 53 episodes & now he has a new upcoming drama woooow daeback kangjae!!!