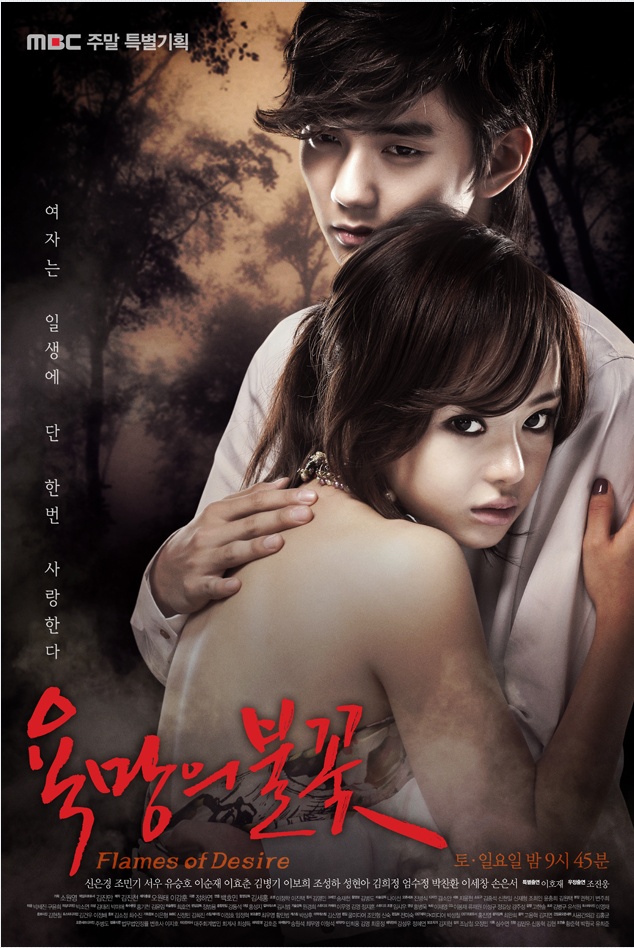 "Flames of Desire" tells the story of success and devastation of a chaebol family.

Kim Min-Jae is the son from a powerful chaebol family. He is the successor for the company, but he is more interested in painting than business.

Park Su-Bin is a popular actress, better known under her stage name of Park In-Gi. She has worked in various high profile CF and won several best actress awards. A scandal then occurs between Park In-Gi and Kim Min-Jae, which leads the two to marriage. Park In-Gi's seems to push forwards so she can escape her past and the secret of her birth. She also believes love, fortune, & destruction is only a game. If she wins then she can be happy.

Conflict then occurs between Park In-Gi and her mother-in-law Yun-Na-Young (Shin Eun-Kyung) - who is obsessed with money.

couchy Nov 14 2017 8:47 pm If u hate watching a b****y woman b****ing around, pls don’t watch tis drama. Yun Na Young is one damn b*****d and b****y woman in this drama. U’ll curse and swear Yun Na Young throughout the whole drama. U just can’t tolerate looking at her face cause she is just damn too evil and sly. Really hate seeing her pretentious look.

Worse still, her cast is being portrayed by Shin Eun Kyung whom she originally looks b****y and sly too esp her pair of evil looking eyes. After watching this drama, we will never watch any show/drama or anything dat has to do with Shin Eun Kyung. We just hate the look of her now.

Nero Nov 13 2017 10:55 am Oh yes! Totally agreed with HighLo. Shin Eun Kyung has a pair of evil looking eyes. The older generation always believe that this type of women with evil looking eyes will always bring bad omen to the family or she will make the family suffer.

HighLo Nov 13 2017 6:19 am Og Gosh! Can’t stand Shin Eun Kyung’s eye. She has the cat’s eye which makes her look like a witch and evil. Her pair of eyes destroyed her whole appearance.

Hanyul Nov 13 2017 4:31 am Shin Eun Kyung is damn old looking and always want to act young in all the shows. Her eyes make her look so evil.

Val Lockett Aug 27 2014 10:55 am These are some crying ass people!!! I'm talking from beginning to end! Big ass crocodile tears. Good drama though!!

Bruce Oct 13 2012 10:43 am My wife and I loved this series. We watched it on Netflix. However, I think that it was much longer than it had to be. Also, the ending left something to be desired. It appeared to be incomplete. I wanted to see how the company and the new order of leaders evolved. What becomes of the family dynamic?

On Netflix, the average rating was 3 out of 5. I think that I could understand why. However, I couldn't in good conscience give anything less than a 4 out of 5, but I refused to give it a 5. The editors could have cut a lot of scenes that served no purpose other than to jerk us around emotionally. It's like, "Tell her already, will ya?!!!."

I recall the many times that Yoon Jung-Sook went to tell her sister, Yun Na-Young, that Baek In Gi is her daughter. Jung-Sook traveled a long way from home to visit her sister, but when she arrives, she can't bring herself to reveal the truth. This happened several times! It was so ridiculous and frustrating! Tell her already!

Also, I couldn't believe that Min Jae remained in the dark so long about his being the younger brother of In Gi! Who keeps a secret that long? I'm an African American, and my wife is Vietnamese, and I asked her, is there any truth in this drama about Asian culture? It seems to be much exaggeration. I hope so. Still, I find Asian culture admirable and fascinating in a lot of ways. I especially love the respect and honor that Asian peoples show one another. I feel like I would fit in such a culture. Perhaps, I have lived as an Asian in a past life.  :-)

Also, there was SO MUCH CRYING to the point that my wife and I became emotionally spent. After a while, we just had to harden our hearts a bit because the characters were just not being anywhere near sensible. It appeared to be crying for crying's sake. Oh my God, tell In Gi that you love her, Mom!!! Don't be a heartless jerk!

Anyway, overall, I loved the story but to the writers, do a little more editing next time. Lastly, we need a few more episodes to tie things up better. You left us hanging at the end.

Askhat Aug 21 2012 1:11 pm Thank you to Korean people for this drama. I am from Kazakhstan. At this time we are looking this drama on Astana channel in Kazakh language. I think that this drama is the best in the world. Very intiligent and dificult script. I like their grandpa (corporation owner) - He is so wise.

JP Jun 24 2012 4:49 pm The synopsis isn’t very accurate on here. The one from DramaWiki fits the story better as the majority of the story is about the “mother” and simply features other characters that come into conflict with her.

The second and third sister-in-laws are the same. They are both money hungry, terrible people that want to ruin the family in their own way. The “mother” is a horrible person who constantly ruins the lives of the people around her, whether they are good or bad people.

sarah Jun 26 2011 3:14 am I first saw shin eun kyung on "white lies" quite different roll she is indeed a great actress

Moonlite Jun 13 2011 8:51 pm I currently watching this kdrama and i must say that Shin Eun Kyung is a great actress.I first watch her in my wife is a gangster with that same fearcing look that give me chills

Jeremy May 25 2011 8:39 pm This show is so awesome! I'm so attached to the characters too. I just feel so bad for Na Young's sister because Na Young is always saying crap and stuff to her and her sister is an angel! I love this show but I am only on episode 13 out of the 50 :0

Bri Apr 28 2011 11:49 pm Finally I finished watching this drama. I felt a little sorry for Nayoung once I learned how she got to be a monster. But I felt even more sorry for Minjae and Baek Ingi. The end wasn't really complete. It would be nice if there was a special. Other than that, it was a really good drama and it's worth watching.

Takit Jan 31 2011 11:10 pm Nayoung, is one manipulating, phsyocological abusive mother I have come across in a long while. The poor boy cannot even to to potty without her knowing what he did. I can't wait to see her downfall, it will also be exciting when Mother/Daughter should meet. Btw, look what she did to her sister, just to marry a rich man.

Ugh Nov 28 2010 2:02 am Na Young is f*cking annoying! Clinging onto her step-son. Ugh. I hate kids who disobey their parents especially their mothers who only want the right thing, but this lady is ugly-different! Forcing her kid who is not even her kid to do EVERYTHING she wants! This drama is really getting to me! Oh well, that's good because I can't wait to see the ugly look on her face when her world comes CRASHING DOWN!!!!

Eri Sep 03 2010 11:40 pm Um is Park Shin Hye actually in this? I haven't heard anything that connected her and this show together.