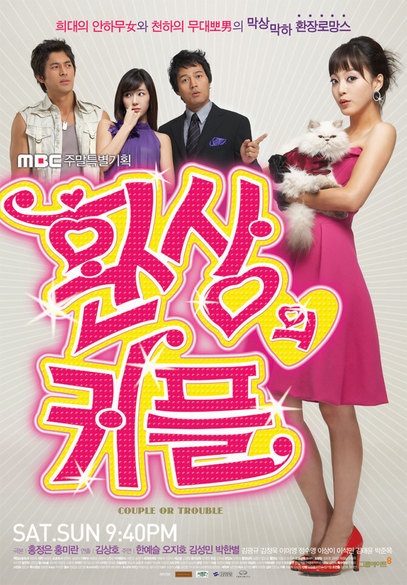 Anna Jo (Han Ye-Seul), daughter of real estate giant Richard Joh and sole heiress to his incredible fortune, gets fed up with the dreary New York weather and decides to take off for Korea. Meanwhile, Billy Park (Kim Sung-Min), her unhappy husband, has been living in Korea for the past three months to stay away from her, under the pretense of working at Anna’s resort. Anna arrives in Korea. However, while driving herself home, she gets lost and ends up getting stuck in a deep ditch.

Jang Cheolsu (Oh Ji-Ho), who lives with his three nephews and runs a small, jack-of-all-trades interior/construction/engineering company, spots Anna’s car on the road. Cheolsu is a man who loves his money, and he quickly jumps at the chance to fix the situation for Anna, provided she is willing to fork over $30. While Cheolsu is struggling to lift the car out of the ditch, Anna wipes the mud off her shoes using Cheolsu’s coat.

While doing so, she mistakes the red paint on Cheolsu’s clothes as blood, and she goes even further by mistaking the mannequin in the backseat as a dead human corpse. Naturally, she is scared out of her wits. The lightning and thunder outside only help to escalate Anna’s fear and tension.

Meanwhile, Cheolsu misunderstands Anna’s behavior as a trick to steal money from him, which is understandable, as she is holding his coat with his money inside the pocket. Suspicious of her actions, Cheolsu slowly approaches the car, while Anna frantically searches for something to defend herself with. She finally locates a shovel. Cheolsu draws nearer and opens the door. Just then, Anna gives the door a swift kick, which knocks Cheolsu to the ground…

Nureen Sep 23 2020 7:05 am Even this drama from 2006,but till now i still watched it. really loved this drama.and this couple are too sweet and make my day. I really enjoyed watch this drama. It made me laugh and cry also.

Richard Jan 21 2020 7:52 am I enjoyed this drama. It made me cry at times, laugh at times. The female lead looks so different compare to her other drama she has been in. Not sure if it is the makeup or lack of makeup she wasn’t wearing.

Malditang Bugay Jun 28 2016 10:16 pm Overall I'd highly recommend this Drama. I'm sure it won't fit everyones taste, but to me it seemed very well balanced, except some scenes of a side story. Still I liked the whole cast, especially Anna and Kang Ja. The main story was enjoyable.

Harry Jan 02 2015 3:09 pm This is a great Kdrama. I loved the leads and they had excellent chemistry and great acting. The storyline and screenplay was great and it had both funny as well as touching moments. I don't know if many have noticed, there was great job done in cinematography and editing as well. The cuts really added to the humour factor for most scenes.

Overall I recommend this kdrama to anyone who likes to watch a romantic comedy drama with a good story and some great acting.

May I please know the song which kagn ja (mad girl) sings in episode 13 of Fantasy Couple, something like paaraa nanil paara nanil koomi ? It seems like a folk song or children song/poem. Please let me know the lysircs with english translation of that song. Thank you......

Overall drama is good and enjoyable.......

kamran from Iran Jun 17 2014 8:22 am I liked it so much. The story of the drama was great and also the performance of Han Ye-Seul was excellent. She touched something inside me. But the director could be better than that.

Mick Apr 06 2014 7:14 pm This Korean Drama is absolutely my favorite, Han Ye-Seul and Oh Ji-Ho have outstanding performances. Wish they would do another comedy dram togather.

Lindsay Jung Feb 11 2014 5:03 pm Love this drama. It's extremely funny and the actors did a great job of portraying their roles.

Clarkdale44 Dec 09 2013 4:54 pm A really must watch drama... Great performance by both Han Ye-Seul and Oh Ji-Ho, they look compatible and cute couple together. I am satisfied with its ending. I will give it 9/10 no doubt for great cast and story line.

oh well Mar 31 2013 10:12 am I agree with most comments here.this drama is funny,sweet and worth watching it.it will make you smile and laugh every time..i am glad that i came across this drama after almost 7 years..it is a good light drama and now im watching it for a second time!haha..

JC Mar 14 2013 5:01 pm Highly recommended for those looking for a light and absolutely FUNNY drama! This is one of very few dramas that kept me laughing every episode (not exaggerating). One of a Kind.

oiij Jul 03 2012 10:30 pm really really good show with a good ending i thought han ye seul was amazing in this show her acting was incredible