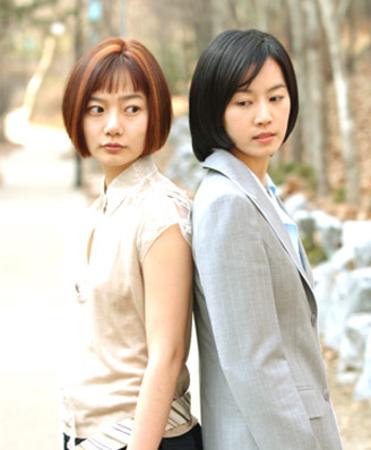 On a cold winter night, Yoon-Hee receives birth pangs and is taken to Kap-Sik's house. At the same time, Kap-Sik's wife Kil-Nyeo (Kim Hae-Sook) is also struggling to give birth. They both give birth to daughters, but right after giving birth Yoon-Hee dies. Kap-Sik decides to raise Eun-Hee (played later by Bae Doo-Na) with his own daughter Keum-Hee (played later by Kim Yu-Mi). The two girls are brought up as twin sisters.

Keum-Hee grows up as a model student. Contrary to Keum-Hee, Eun-Hee grows up as a trouble-maker and is mistreated by her mother. During their high school days, their father Kap-Sik is injured in a car accident and goes through surgery. Under financial strain, Kil-Nyeo asks Eun-Hee's teacher to transfer her daughter to a vocational school. Eun-Hee overhears the conversation and runs to the bus stop in tears. By accident, Eun-Hee boards a bus heading to Seoul. While on the bus, Eun-Hee meets Ji-Hoon (Gang Dong-Won).

Now back at home, Eun-Hee keeps in touch with Ji-Hoon by letters. Keum-Hee takes an entrance exam to a university, while Eun-Hee takes care of her siblings. One day, Keum-Hee collapses in a book store. There Ji-Hoon finds stricken Keum-Hee and helps her. Ji-Hoon is a medical student who came to the village through a volunteer medical service in Seoul. Ji-Hoon learns that Keum-Hee is Eun-Hee's twin sister and is surprised. Keum-Hee starts to feel jealousy.

By an accident caused by Keum-Hee, Kap-Sik dies in a fire while trying to save Eun-Hee. A few days later, President Kim comes to their house looking to find his grand-daughter. Kil-Nyeo takes advantage of the situation and lies to President Kim. Kil-Nyeo tells him that Keum-Hee (her daughter by birth) is his granddaughter. Keum-Hee leaves with President Kim.

6 years later, Eun-Hee is dumped by a man who promised to marry her and gave birth to his child. Eun-Hee and her family move to Seoul. There she works part-time jobs to support her family.

Meanwhile, In-Woo (Shin Seong-Woo) comes to Korea for his father's funeral. In-Woo does not want to take over his father's debt-ridden company, but he has no choice.

Keun-Hee graduates from a university & takes a job as a secretary.

Their mother Kil-Nyeo is diagnosed with cancer. Eun-Hee wants to save her, but she doesn't have any money. Eun-Hee is an accountant at a factory which is about to go bankrupt. The company is inherited by In-Woo. Eun-Hee doesn't even get a salary at this point from the nearly insolvent company. In desperation, Eun-Hee takes back her rental deposit and moves into the factory dormitory with her 1-year-old son and 9-year-old twin siblings. In the dormitory there is In-Woo who has also moved in. There, Eun-Hee makes a pact with In-Woo to save the company. Eun-Hee now does her best to help revive the factory.

At the hospital, Kil-Nyeo confesses that she lied to President Kim about which daughter was his granddaughter ...

Park Min Nov 01 2022 9:45 pm This had 3 sets of twins, two of which identical, the highest number I've seen in a drama. Bae Doo Na solo carried the entire show meanwhile the remainder of the cast were dead corpses re-animated to life. The story cycles through the following sequence: Geum Hee does bad and promises to treat Eun Hee better just to backstab her few minutes later, rinse and repeat 10 more times until the last episode. I wish there was more variations. The romance was one of the driest, it didn't amount to anything, minimum affection and absolutely not a single kiss. The drama was somewhat fine until episode 15 started and it just couldn't recover after that. One last very important thing, there wasn't enough justice/karma or payoff at the end.

wondrgal Feb 12 2016 1:34 pm I feel for Inwoo in this drama being mistreated by eun hee who's so rude, ungrateful for what he's done accommodating her, the baby & the twins, she humiliates Inwoo in front of the doctor, so harsh with him most times N tho i'm still in the middle of watching i really am annoyed with eun hee so disrespectful N rude to Inwoo! I'm not sure tho why Inwoo started to like/luv her coz she's too much! (spoiler sorry about it) :) but can't help but rant here! i only watch coz of Shin sung woo or Mama Shin in Roommates! He's under-rated actor but he's pretty good!

woahgirl Feb 11 2016 3:35 pm i'm watching bc of Shins sung woo & as i watch he got more air time it seems than kang dong won but i was baffled why SSW was not well known after this drama? was it bc of his role here? Kang dong won got more popular & i thought Shin sung did a great job too! if anything i believe that Bae doo na was too annoying in her role, she pushed herself into living at her boss' place w/out any permission whatsoever but still ungrateful to Inwoo in spite of having her stayed with her siblings & her baby! she was talking behind Inwoo's back to the doctor friend (KDW) that Inwoo doesn't care about others! Mama Shin was too cute in this drama, i like him more/more!

Ananta Aug 27 2014 11:35 am DON'T WATCH THIS! It was enjoyable the first episodes, but the ending just sucks.... It is completly unstatisfying If you want to know why... Spoiler:

SPOILER: The Birth Secret that Lee Eun-Hee is the real granddaughter is only revealed to her, but her real family doesn't know anything, and Lee Keum-Hee shamlessly stays as the fake granddaughter. She will probably also inherit the company, so she greedily gets what she wants. (Though this was not shown on the show)

Sunnee Nov 06 2013 11:46 pm I was soooooo disappointed with the TERRIBLE SCRIPT. Even though I'm not trained in film writing, I was surprised by the bad writing, The beginning, i thought was well written and I liked how it developed but the story writing progressively got worse. The acting was surprisingly very bad too. Ms. Bae was EXCELLENT!! First time seeing one of her movies. Overall.... I would not recommend this movie. Save your time .. and just don't do it!