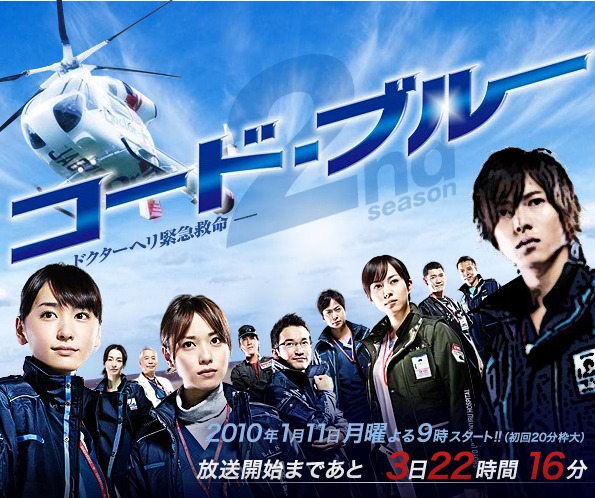 "Doctor Helipctor" candidate Kousaku Aizawa (Tomohisa Yamashita) does his best in the medical care spot. Season 2 begins with a mother and son on a bicycle who crashes into a motorcycle. The boys falls into a river and doctor Kousaku Aizawa jumps into the cold river to save the boy.

Nubz Dec 19 2013 3:22 am Best show. But it would be great if u put some kind of love story on it. I would recommend Aizawa and Saejima. Haha

Bart Feb 28 2010 5:41 am i've watched the 1st season. its quiet good, but not great. just start downloading the 2nd season. hopefully it'll be better than the 1st one.

mitzmin Jan 07 2010 1:37 pm is hananbi from mr.children the same theme song from the first season? I reaaaally hope it's NOT

kisha adams Jan 04 2010 5:45 am I am so pleased with the impact this show has made on the medical transportation system in remote areas of Japan; That are in need of quick life saving transport.

I myself am a huge "News" fan, and begin watching for the lead actor Tomohisa Yamashita AKA Yamapi.

He has change so much over these past years, that at times it's hard to believe.

mitzmin Dec 16 2009 9:16 am oh my god! I am sooo looking forward to watch the second season. I mean, The first is really good and everything and the special is too. If it didn't change aizawa's personality much (because I love it) I'd like him stay with shiraishi or something similar