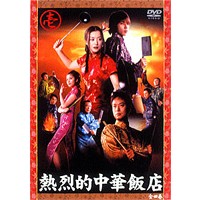 Announcing the arrival of a "gourmet drama" with lots of tears, laughs and emotion, that takes on the challenge of four-thousand years of Chinese history.The Star Leo is a luxury cruiser shuttling between Japan and Hong Kong. On this cruise, seven top chefs known as "culinary kings" have been invited for a major event in which guests can savor a fancy dinner that they cook up. This event has been planned by Shio Tachibana, a woman who learned business management in Hong Kong.But the chefs of the restaurant "Heiheiro" aboard the luxury ship leave the ship in protest against the event and, to make matters worse, due to a slipup the "culinary kings" also fail to board the ship, which then sets sail for Japan without them.Tachibana gets the cooperation of the "loser" chef remaining in the restaurant "Heiheiro" together with their apprentice chef, crewmembers and passengers for a team of five people to take on the cooking for the event.What will the voyage of the Star Leo turn out to be?