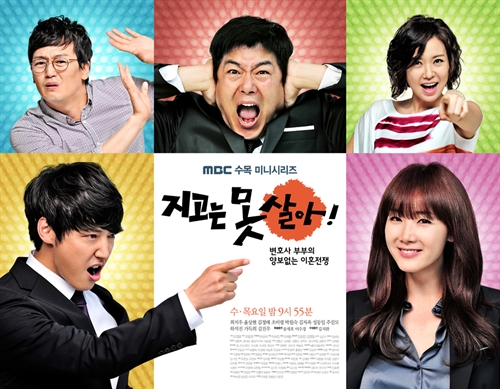 Eun-Jae (Choi Ji-Woo) and Hyung-Woo (Yoon Sang-Hyun) have been married for one year. They are both lawyers.

They first met at a baseball game when they happened to have seats next to each other. During the baseball game they kissed and fell in love. Hyung-Woo told Eun-Jae that he wants to become a human rights lawyer. Eun-Jae supports his dream and they opened their own law firm together.

One year later, the thrill is gone in their relationship. Eun-Jae struggles to maintain the law firm alone, while Hyung-Woo helps clients who are not able to pay much for his services. Their interests have also diverged. One day, the couple learns that Eun-Jae did not register their marriage. The next day, Eun-Jae goes to file the proper papers. Eun-Jae is unhappy that Hyung-Woo is so generous to others and wants him to think about her more. Later on, Hyung-Woo's friends, who are a couple, stops by the law firm and the wife, Young-Joo (Jo Mi-Ryung) insists that she wants a divorce. Young-Joo states that her husband Ki-Chan (Kim Jung-Tae) hasn't worked in years and, yet, still gave his family a large sum of money. The married couple start yelling at each other. Ki-Chan states that he borrowed the money from Hyung-Woo.

Meanwhile, Eun-Jae hears of the loan and has had enough. Eun-Jae decides that they need a serious talk. Eun-Jae and Hyung-Woo then book a trip to Japan where they had their honeymoon. Hyung-Woo then mistakenly text messages his itinerary to his mother instead of Eun-Jae. When Hyung-Woo and Eun-Jae arrive at the airport they find Hyung-Woo's mother there as well, believing she was invited to their trip to Japan. Making matters worse Hyung-Woo receives a phone call from his mother-in-law asking to see him immediately and to keep it a secret. Hyung-Woo doesn't know why his wife and his mother-in-law doesn't get along or why he was never formally introduced to his mother-in-law, but he feels obligated to meet her and leaves ...

ikemen Nov 04 2016 2:20 pm As the leads are all the top stars and it relates to law works, I started to watch with excitement. However, the plot is what killed all the funs, I have no idea how the director organized the scenes. They are just very illogic and boring. Like when you are supposed to surprised about what happen in the drama but obviously you are not but thing its totally a mess. For poor jokes they added, it would be better if removed and totally focus on the law works, or personal life of the couples. I look at the clock and realize its only episode 2. I really like the casts but...not the order of the plot. A hard drama to withstand for the love of CJW and YSH

akain Apr 21 2015 11:42 am an ultimately boring drama with no plot and useless dragging..the female character is really depspicable, her tantrums and behaviour are just too much..this drama could hav been easily over in 5-6 episodes..although the leads are very good actors but the story is very boring and over repetitive..hence the very low ratings

rusti Dec 02 2014 7:33 pm Just watched this drama for the first time, great story, love the drama! Love CJW in any work she does. This was no different.

Tina Oct 18 2011 9:58 am This drama is so funny, but, I can't imagine for the ending for this drama Love to see Yoon Sang Hyun and Choi Ji Woo play together. They're so funny I can't wait to see it :)

lucille Aug 25 2011 6:25 am Just recently watched ep.1 without sub coz cant really wait.. watching only CJW and YSH body language, actions, and emotions is hilarious; how much more if i can understand what they are saying… i can say that i’m IN for this series.. DEFINITELY A MUST WATCH… It may not be as romantic as SeGa but i like the chemistry of CJW/YSH plus the comedy factor… cant help laughing on the entire ep 1.. hoping for the succeeding episodes to be funny and hilarious…cant wait… hahaha.

For 2011, this will be my 1st kdrama which im hooked with the start of ep 1 only (the last time was in SeGa, cant seem to watch new drama after SeGa) I just jumped from ep to ep or stopped watching at all for the 2011 kdrama line up and just watched previous HJW dramas or previous dramas that are worth watching…