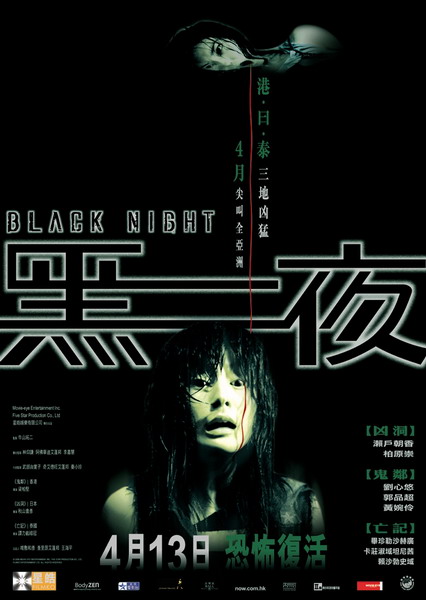 It was July according to the lunar calendar; the month of the ghost festival. A lot of people were burning joss sticks and paper offerings in the streets to placate the wandering ghosts.

Creepy horrifying incidents took place one after another on a fateful night when Taiwanese girl Yichun (Annie Liu) returned to look for her policeman boyfriend Joe (Dylan Kuo) only to discover that he has already started a new affair with his beautiful neighbor a girl from mainland China, Hosie (Race Wong). When intense passion and great expectations were met with disillusionment of failed promsies, tragedy was bound to arise. Amid the weird sound of marbles bouncing on the the floor; sudden knocks on the door, scary images through the peephole, the tale of the three protagonists interlocked in the web of fate was unfolded in a heart-rending, thought-inspiring as well as hair-raising manner.

Bride to be Yuki (Asaka Seto) has been suffering from nightmares. One day, she notices "a boy in a yellow outfit" appeared in real, who he has been visited in her dream several times. However, he is only apparent to Yuki and he vanishes when she recognizes his presence, only leaving a puddle of water behind. She feels frightened at these mysterious phenomenas. As her fiance, Satoshi (Takashi Kashiwabara) suggested, she goes to see a psychiatrist.

Yuki's psychiatrist (Tomorowo Taguchi) finds out the origin of Yuki's nightmares by several treatments. Yuki has lost her childhood memories when she was in the elementary school. Coincidentally, one of her classmates and her mother mysteriously died in the most bizarre way. Yuki is terrified since she gradually implies the casuality between her nightmare and those accidents. One day, she finally reveals her secret under hypnosis during the therapy that she used to have an unknown creature as a pet.

Prang (Pitchanart Sakakorn) is a single mother who lives with her young son (Athipan Chantapichai). They would have enjoyed a happy existence, if not for a mysterious man who seems to shadow Prang wherever she goes. The mother believes that the man has been sent by her ex-husband Wit (Kajonsak Ratananisai), with a malicious intent of stealing her son. Prang's life is thus lived in a state of constant paranoia.

While searching for dues, she visits an apartment that looks familiar to her. She also recalls her friendship with Praew (Nutsha Bootsri), a woman who's been her best buddy as well as Wit's since their university years.

But Prang's memories keep slipping out of her grasp. And the more she searches, the more the scary incidents of the past come back to haunt her like an endless screening of an old movie. Her deepest memory, one that is too painful to bear, resides in the abyss of her mind. The true nature of the relationship between Praew and Wit is the key that will unlock Prang's turbulent past.