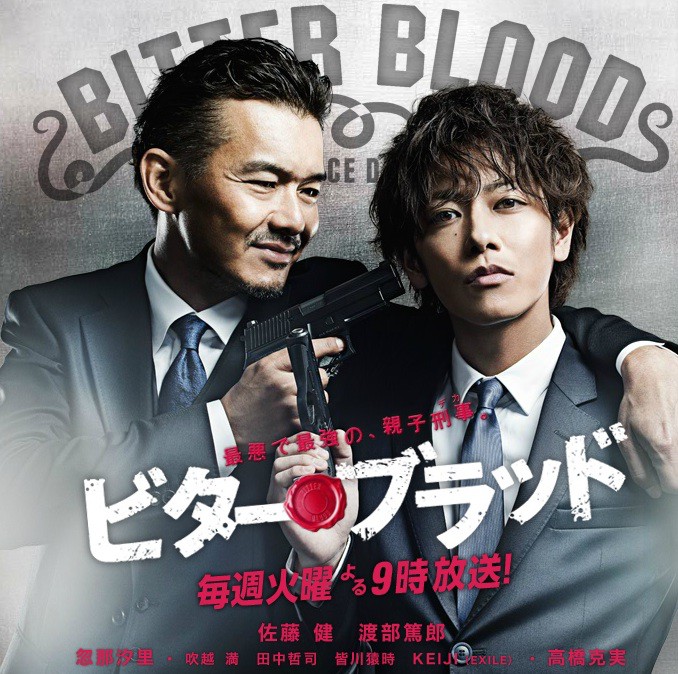 Natsuki Sahara (Takeru Satoh) is a rookie detective. He is assigned to work as the #1 detective for the Ginza Police Station, but his father Akimura Shimao (Atsuro Watabe) also works there as a detective. Natsuki Sahara does not like his father at all. After his parents divorced when he was 13-years-old, he was raised by his grandparents. Meanwhile, Akimura is a bit eccentric and a playboy with the ladies. This is in direct contrast with his son who is poor when it comes to dating. Akimura feels bad for his son for divorcing when he did. He tries to help him at work, but has difficulties approaching him in the right way.

Karin Jul 06 2020 1:41 am Mitsuhiro Oikawa's acting in this drama is not good enough. He doesnt look like villain. He still look like a good character. For Shiori Kutsuna, she should improve her acting skill.

For both lead male characters, they did good job. They have great chemistry.

Kobuta Apr 21 2020 5:10 pm Loved it! Dad and son were so cute together. Both actors are so hot! They made me laugh so much. As usual in every drama, everyone always keep things for themselves and the other never knows about their feelings...

dee Apr 10 2018 12:23 am I love Sato Takeru and I've watched most of his work. I love his comedic timing and he suits this kind of role the best. That's why I enjoyed this drama so much. His chemistry with Watabe Atsuro is so strong that it makes every scene with the two of them so enjoyable to watch. Would love to see them working together in more projects in the future. :)

Now, about the actual drama itself. I first watched this drama two years ago when a random local channel aired it but somehow they stopped airing without reason so I never got around to finish watching it. The story itself is good, although sometimes I'm annoyed by how incapable these detectives are. Hahaha. But I guess, it is a comedy so they did it in purpose.

The villain though, I can't stand him. It seems like the writer make him the villain just for the sake of being a villain, with no real backstory. I mean, he kept going on and on that he lost everything because Gentle shot his leg but then what? He never actually told what happened. And the acting too. The actor seemed to try to steer this villain into a more psychopath, Joker-esque type of villain, but his acting just wasn't believable and more than anything, it's so cringeworthy. I don't know if it's the writer's fault or the actor's fault, but if only the main villain is a written better, I would say that this is the perfect cop comedy drama I've ever watched.

karisu v Jul 27 2017 4:51 am i really enjoyed this show! me and my friends watched it years ago and i watched it again the other day and it made my day fun. we are hungering for season 2. please please arigatou gozaimasu!

Cookie Feb 06 2017 10:28 pm Just finished this series, LOVED IT~~~ Love everything Satoh Takeru has been in so far. This would do well with a second season, resolving romance and father/son relationship.

Reya Aug 21 2016 11:29 pm The father and son dynamic drives this show, and their constant bickering and comedic moments were highly entertaining. Takeru and Atsuro are hilarious together. I loved Shiori and Takeru as well. My only gripe is probably the villain of the story, he was so cringe worthy and comical I winced every time he was on screen and just couldn't take him seriously at all. Also at times the plot was pretty outrageous (I found myself yelling a lot when the detectives handled the supposedly dangerous situations in a silly manner) but the leads relationship makes up for it so I would recommend watching it. Season 2 would be great, just write a better villain please.

Abbey Sep 26 2015 2:29 pm dammit!!!!why does all the awesome series have to end like this?!!! i had such so much fun while watching this show! this show deserves more seasons!!!only season 1 is not fair.enuf said!

alicia Jan 04 2015 9:37 pm the series is too awesome to end in 11 episodes. perfect casting. taka doesn't have his story. kaizuka has no back story - where his anger is coming from. anyway, the series is awesome as it is. it was fun watching the father-and-son arguments even at life-threatening situations.

gary Jan 01 2015 3:54 pm can I ask if someone knows the song played in episode 5 when natsuki and hitomi are talking to each other :3 the song is stocked in my ear and I want to know the title , thank you guys :D this drama deserves a big thumbs up :D

Patricia Dec 15 2014 3:03 am This drama is fully loaded with comedy and nice stories in all episodes. Takeru kun has done a terrific job as a rookie detective !!! Too bad if you miss this drama :-) I hope that there will be the second season for this drama ... :-)

Silverette Nov 13 2014 12:26 pm Why does the father and son have different last name? Natsuiki SAHARA and Akimura SHIMAO? Can someone explain... onegaishimas~

KK Oct 21 2014 8:33 pm I hope there is a season 2! The finale episode mentioned "to be continued'. Chemistry between the Father and Son is good! I am glad I watched it!

m Sep 25 2014 5:36 pm This is one of the dramas that really deserves a second and more seasons. The chemistry between the two partners (father and son, who don't get along, but are extremely similar in character and behavior) who are great detectives. The chemistry of The Team is also great.

Lots of action, humor and some family moments.

I really hope there are more seasons... I watches through the whole season for one night. I loved it so much!!!

tinay gonz Aug 29 2014 11:35 pm I soooo love this drama! It's so entertaining, action-packed and with family lessons too! Please have a season 2 and more!

Junior May 29 2014 1:23 am I think she's the one who played Nakajima Haru in Tokyo Control and Tokyo Airport, Nonami Maho.

He's so cute and handsome in that episode ! I'm so looking forward seeing him in the next episodes~