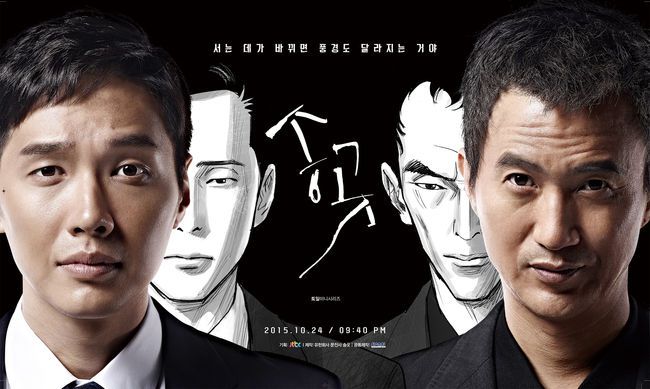 Lee Soo-In has the kind of temperament where he has to do the right thing no matter what. After his discharge from the military, he has worked at a large retail market. One day, his boss orders him to fire temporary employees at the store. Lee Soo-In refuses to do so and decides to join the labor union. He and the temporary employees struggle against unfair dismissals.

Nana Aug 27 2017 7:14 pm this drama deserved an award. the story is meaningful. all the actors also play their role perfectly.

Malu Maniquis Feb 28 2016 5:19 am Congratulations to all the cast, crew and producers for making such a well-made, powerful and inspiring drama series until the very last episode! Although resolving the role of workers in society must be given serious thought, especially those in major industries. Should they stop when they have achieved their economic demands from capitalists or work together with other sectors to make a better society for all?

Wulan Jan 27 2016 4:48 am Lol, am I the only one here who realized that Ji Hyun Woo and Yesung are both the same age but Yesung look younger and cute here ?? Even Yesung birthday is earlier than JHW. Anyway, their acting were good. Yesung looks so natural :)

Juserfans Nov 20 2015 1:01 pm Great storyline, I thought it will be too heavy, but the plot makes you want to watch more. Awesome cinematography and acting !! I agree Ji Hyun Woo looks more handsome in this drama...but applaud to Ahn Nae-Sang, he deserves an award.

bmore Nov 17 2015 12:11 pm Absolutely amazing drama...Ji Hyun-Woo is living his role. Every inch of his body and face completely epitomizes his character, Lee Soo-In. It is his finest role. Like Misaeng I would never have dreamed that a drama about Union organization would blow me away like this. A must see drama. I've laughed and cried and continue to be amazed that every week I am lucky enough to have found this drama!

"Anyone who wants to leave is free to go. Those who left are not traitors. Not everyone can endure the same weight of burden. They are our comrades in battle, who fell down a little earlier. I won't criticize my comrades who got injured. I don't know much about a labor union yet, but more than for me than you, more for those who quit because of one paycheck [cut] than for you, more for those who couldn't even join than for those who quit, for contractors who might not even be able to join, the Union will be helpful. A Union that closes its doors to those who are desperate is meaningless. If you stay here, it will only get more difficult. There is no special reward for those who work harder. If we succeed, everyone succeeds. If we fail, the failure will be on us only. So, take the burden only so much as you can endure."

"What will you do if we all leave and you are left by yourself?"

"Even when troops retreat, someone has to stay behind. Otherwise it's a total defeat. Until all of you have retreated, and your safety is insured, I will stay here." Lee Soo-In.

Dyah Nov 17 2015 3:39 am this drama different with many korean drama, i like the spirit and Ji Hyun Woo's acting. Great story line

Malu Maniquis Nov 13 2015 11:57 pm This is, indeed, a very educational and empowering drama. Must be viewed by all working class. I hope we have one like this seriously tackling labor issues as most of the Filipino workers have miserable working conditions.

CW Nov 07 2015 1:25 pm Awl shows real potential, the writing and storyline is good, love seeing Ji Hyun Woo and Ahn Nae Sang. So far, ANS stands out. He is playing this part well and is well cast. It's still a bit early yet, so I can't say too much about it. I don't normally like shows with too much violence and so it was hard to watch some scenes at the beginning, but I felt it was worth it, the message so far is good enough for me to do that. And it's cathartic. I find myself wanting to see this drama over the others I'm watching. So let's see how this plays out...so to speak.

bigELF Nov 06 2015 10:34 am usually i didnt watch the movie which is newly add and ill wait for the full episode n then watch. but i dare to watch this drama even it just published the 3rd episode. it is just for Yesung Oppa ! Oppa Fighting.!!