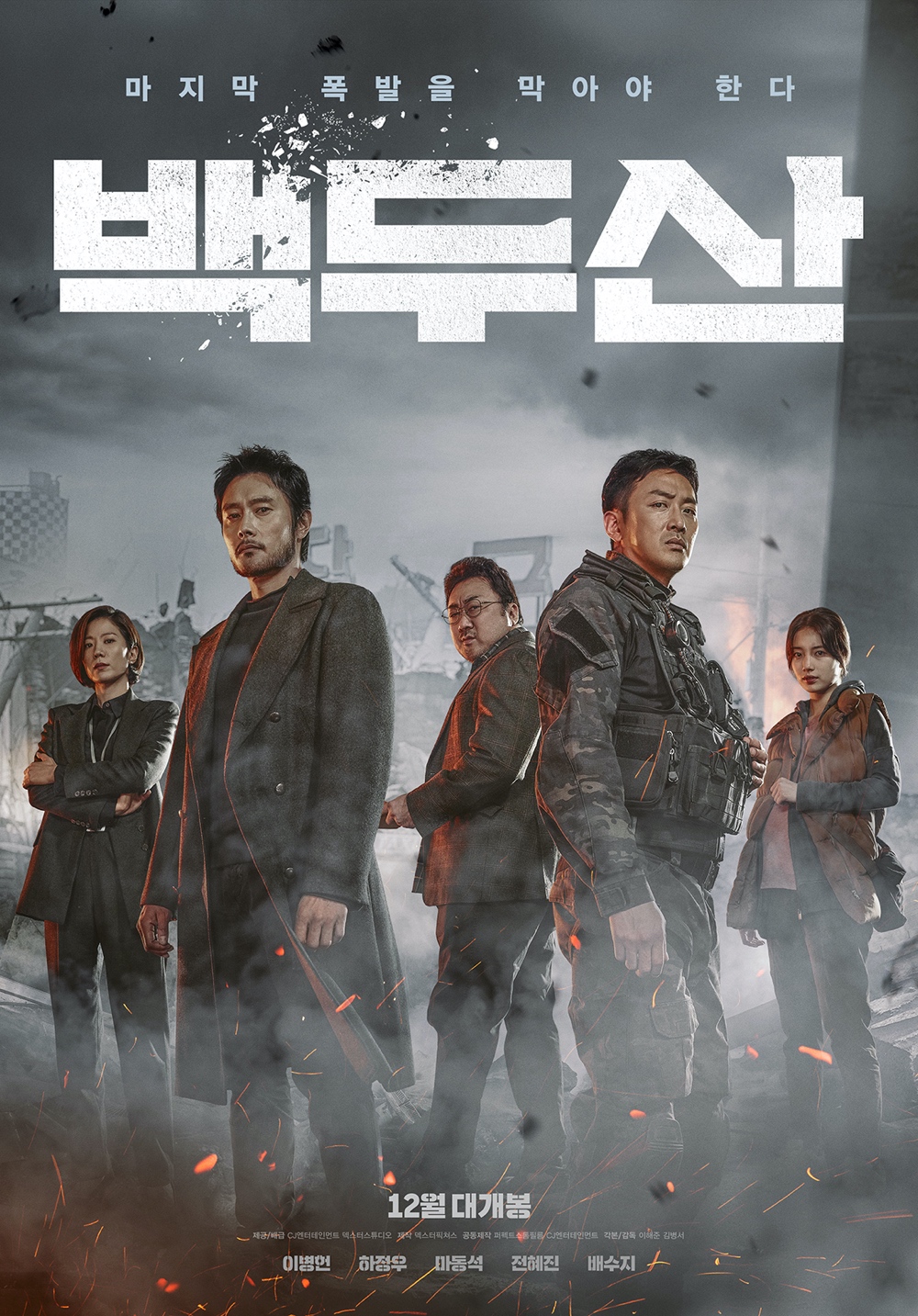 A volcano on Baekdu Mountain suddenly erupts. Pandemonium ensues on the Korean peninsula, with more eruptions predicted in the area.

Government official Jeon Yoo-Kyung (Jeon Hye-Jin) finds Professor Kang Bong-Rae (Ma Dong-Seok), who studied Baekdu Mountain and warned of its possible eruptions for the past 3 years. Nobody listened to him at the time. To prevent another disaster, the South Korean government plans an operation based on a theory by Professor Kang Bong-Rae. EOD (Explosive Ordnance Disposal) Caption Jo In-Chang (Ha Jung-Woo) is recruited to take part in the operation. Because of a plane crash, only Jo In-Chang and his EOD team land safely in North Korea. His team must now carry out the entire operation by themselves.

In a North Korean prison, Jo In-Chang locates Lee Joon-Pyeong (Lee Byung-Hun), who used to be part of the Ministry of People's Armed Forces of North Korea. Meanwhile, Jo In-Chang's wife Choi Ji-Young (Bae Suzy) is alone in Seoul and expecting a baby soon. She struggles to survives against the disaster.

gg Aug 28 2020 3:41 am i just watched this movie yesterday. no wonder LBH won the best actor award. he deserves it. this movie is really interesting eventho some of it kinda unrealistic but nvm since the cg was amazing af. u should give it a try. it's not boring at all, w the bromance between LBH n HJW.they are funny tho haha

Defff Feb 10 2020 10:20 am Crap movie..suzy survived tsunami, relaxly taking the airport bus after that without any single injury...

Tala Feb 03 2020 1:51 am the CGI was nice but the Storyline was un realistic and hilarious scenes like: -after the Earthquake and the people still goes back to their 20ft high apartment cause YOLO, any logical person would evacuate when the building was already damage. -Suzy surviving Tsunami while it was shown she was totally trap in the car? -Out of nowhere the scene moves to Suzy just floating and suddenly boarded the bus I hope someone can explain what kind of Sorcery is this? -US Army suddenly shows up & stops the operation in South Korean soil? -North Korean Taxi doesn't run of gas? Am pretty much sure it was a long distance ride between where Ha Jung-Woo gets Lee Byung-Hun and goes back to the Volcano and still makes it alive? -the Tunnel was a Labyrinth and there is no electricity does Ha Jung-Woo have a night vision that I don't know? Cause am sure he doesn't a flashlight that time. -damn that North Korean Taxi is Heavy duty its really beyond me how did it withstand the lava spewing, heavy solid raining ash & along with gigantic rocks, this is seriously some Mythbusters stuff. Also every time Lee Byung-Hun and Jeon Do-Yeon are getting paired both of thier character always die is that a their thing?

pine.mushroom Jan 19 2020 5:44 am i just watch this movie and indeed i am agree with the comment below me, this movie is super ridiculous, the scene where suzy traped in the brigde inside her car and then after water destroy the brigde she is floating in the river and then idk what the f*ck is happening she come to the evacuation bus with dry clothes like nothing had happened to her before i mean how the f*ck is a pregnant woman could do such a thing, at least make the scene someone helping her or she found something or etc,also she's not wetting at all wtf lol , the transition is just so rough, also the scene where the airplane crashing and they want to take the black box inside the other plane there's already a car/tank in that place how the f*ck did the car already there they just landed in nowhere land lol make no sense, too much unnecessary conversation, too much unnecessary comedy, this movie already had a great cgi but if they make the plot more serious and dark it will make this movie way more better, the jokes is cringe i cant stand ha jung woo jokes either, the chemistry between jung woo and byung hun didnt match at all, they are both look like being forced to do that,also ma dong sok character is just soooo unnecessary, the only good thing about this movie is the CGI and ha jung woo team, theyre more funny and fun to watch than the main actor...

i'm really sorry to say this, but after watching this movie, i feel like it's really overrated. i believe this movie surpasses millions moviegoers (in SK) because of it's star-studded line-ups. there are so many nonsense plots that i think it's really a stupid things to be added in a high-production-cost movie. such as: suzy is still alive and well even after crashed by water (almost like tsunami) and floated in the water like-no-one-knows-for-how-long despite her being a trimester pregnant woman. don't forget she's locked in her car and somehow survive and getting out of the car in the water (lol that's insane, shouldn't car door be harder to open in water?). then ha jung woo comes alive (miraculously) from being near (even undergound) the active volcano (the volcano even spews its lava). i think that 2 things is the major stupid things i've found in the movie (and small mistakes that i can't count but still okay to me). i have a high expectation for this movie because of its casts (i love ha jung woo and ma dong seok and lee byung hun). but the result is....................2/5, 1 for the casts and 1 for the great cgi. maybe i'll add like a half for the (excessive) comedic scenes.

ziaerin Jan 02 2020 8:32 am Worth Watching!! The feelings throughout the movie was a roller coaster ride w anxiety, hilarious and sadness. Really, give it a shot. Won't regret and I would love to watch it again <3

Mizuka Nov 20 2019 5:37 am This trailer really reminds me of Pandora . When kim namgil tryna save people in his town , his gf & family struggle to keep survive from the disaster . Cant wait to se ha jungwoo & lee byunghun together

kdramaAddict Nov 09 2019 6:55 am I can smell blockbuster here!!! Suzy did really good in WYWS and Vagabond. Looking forward to her with the top actors in this movie! Hope they will show it in cinema in Philippines too.