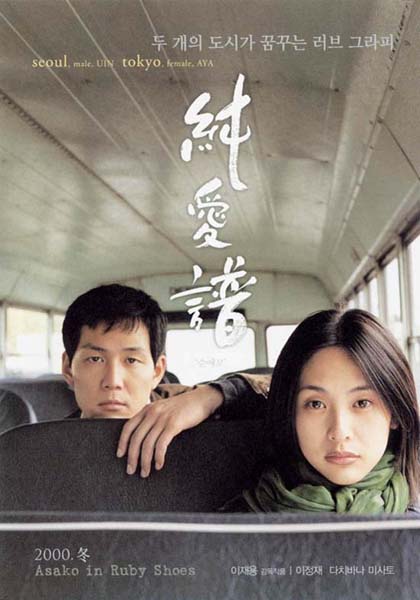 Lee Jung-jae, who was also featured in E's debut, plays E U-in, a Korean civil servant bored and unfulfilled in his job and life. Void of a circle of friends, U-in spends his nights cruising internet porn sites. His voyeurism does not stop with his nighttime activities, however, for he also engages in stalking a woman unavailable to him, a young, punkish woman (Kim Min-heui) whose hair is dyed a fire-y Run Lola Run-ish red. One day U-in receives a spam email that he proceeds to reinforce by clicking on the provided link. He is asked to type in his perfect woman and he proceeds to type in the demographics of Mia, the object of his daytime gaze. From here, the titular character is created from U-in's gaze, Asako in Ruby Shoes.

Asako in Ruby Shoes The women behind the gaze that is Asako is a young Japanese named Aya (Tachibana Misato) who has found her life to be similarly soulless. Having decided on a unique form of suicide, she plans to hold her breath across the International Date Line so as to confuse whether she died today or yesterday, she decides to forgo her future and stop attending her pre-college classes. Getting a job at a health club, she befriends a co-worker, Rie (Awata Urara), a slightly manic-depressive loner who is attracted to Middle Eastern men. After eventually being fired from the health club, Aya decides to pursue a "modeling" gig in order to afford her trip to the International Date Line and to fully pay for the object of her gaze, the Dorothy-esque Ruby Shoes. * Koreanfilm.org