Amalfi: Rewards of the Goddess 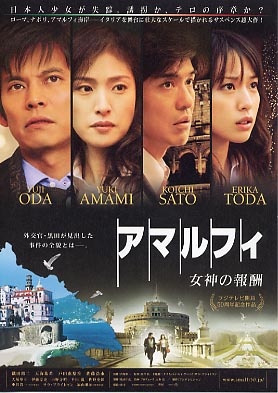 Kuroda Yuji Oda is a foreign diplomat working in the coastal town of Amalfi, Italy. He investigates the case of a young Japanese girl kidnapped off the streets of Rome at Christmas, eventually falling in love with the girl's mother (played by Yuki Amami).

RamenLover Jul 20 2009 5:37 am Diego the movie was just released in Japan, so outside of the movie playing at local festival near you, not likely you can watch it on DVD anytime soon.

Diego Jul 20 2009 4:17 am Please, could you tell me how is possible to see or to buy, online, the dvd of the movie? probably one friend of mine has been taken in the roman cast.

thanks in advance, D.