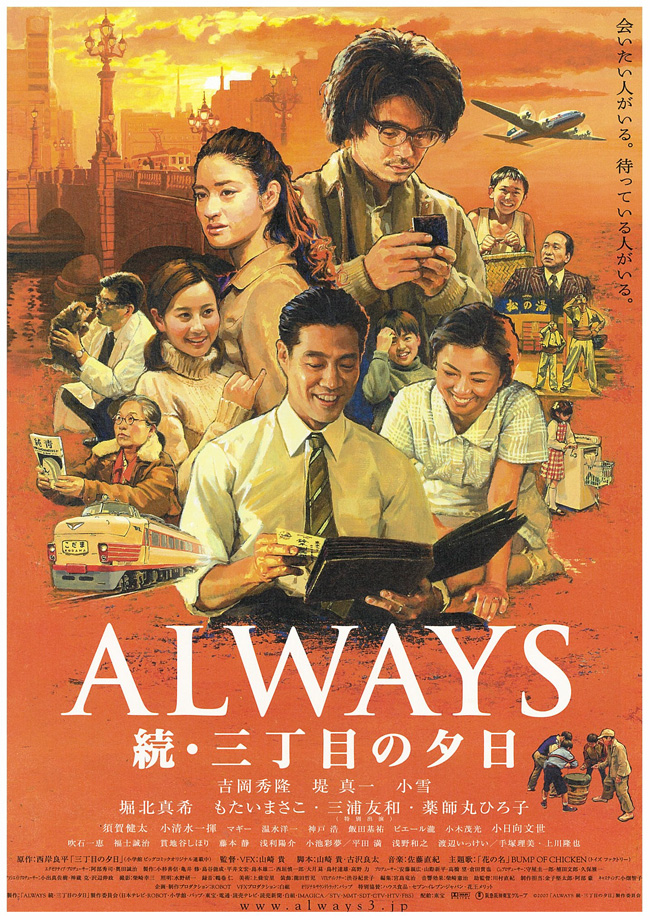 4 months after the prequel. Spring, 1959. The Olympics in Tokyo has officially been announced, and Japan is about to take its first step into the period of high economic growth. Still unable to forget Hiromi, who had left without a word, Chagawa has been living with Junnosuke. One day, Kawabuchi returns to take Junnosuke away. Chagawa is given permission to take care of Junnosuke on the condition that the child enjoys an ordinary standard of living, so to obtain a decent living and to show Hiromi that he has become a better man, Chagawa begins to write a literary piece to win the Akutagawa Prize, a dream that he had given up long ago.

Meanwhile, at Suzuki Auto, Mutsuko has learned her job and the company has been growing steadily. One day, a new member joins the Suzuki family. Because a relative of Norifumi’s had gone bankrupt, the Suzukis agree to take in the relative’s daughter, Mika. Norifumi’s son, Ippei, is against the idea, but Norifumi, his wife Tomoe and Mutsuko welcome Mika warmly. However, Mika, who had been brought up in comfortable circumstances, is bewildered by her new life without a maid.

Also, the familiar faces such as Dr. Takuma and Kin at the tobacco store are still around, joined by new members such as Mutsuko’s childhood friend Takeo Nakayama and others, and it appears that the Third Street neighborhood is still bustling with warm-hearted exchange and lively activity. 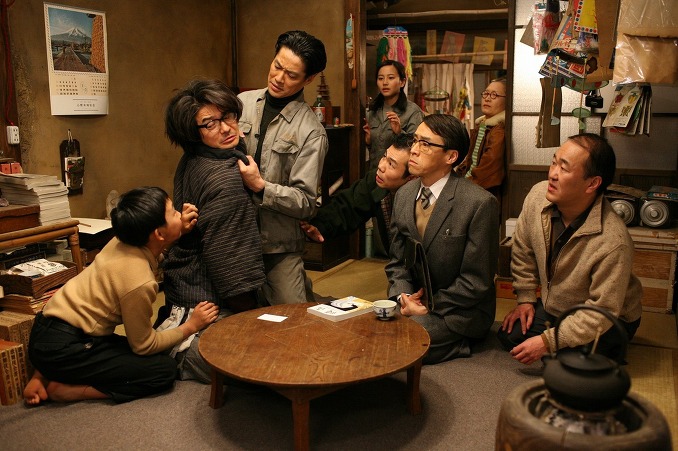 Ki Feb 01 2009 4:33 am “Always: Sunset on Third Street 2″ is the follow-up to the 2005 Japanese mega-hit “Always: Sunset on Third Street 2″ (based on the comic of the same name by Ryohei Saigan). The first film literally owned the Japanese box office in ‘05 and swept the following Japanese Academy Awards (11 out 12 awards if your counting). Although I found the original to be fairly pleasant, I certainly didn’t understand what all the fuss was about. The warm gooey nostalgia that film continuously conjured became more of a nuisance as the film trudged along to its better than expected finale. Sequels being sequels, I didn’t expect much from the follow-up, except maybe turning off the movie if it continued to serve up the glutenous goo of excessive nostalgia. Well, to my surprise, “Always: Sunset on Third Street 2″ turned out to be way better than excepted, easily surpassing the original, and it did make me shed a few tears on more than one occasion.

In “Always: Sunset on Third Street 2″ Chagawa continues his struggles to become a successful writer, while battling through writer’s block. Chagawa is still the guardian parent for young Junnosuke. His girlfriend Hiromi is nowhere to be found as she has left the bargirl scene and stepped into the world of burlesque dancing. Trouble quickly brews for Chagawa and Junnosuke, when Junnosuke’s birthfather Kawabata drives through 3rd street and stops for a visit at Chagawa’s modest home. During his visit, Kawabata gives Chagawa an ultimatum, “give Junnosuke a normal life or else ….”

Meanwhile, across the street at Suzuki Automotive, the Suzuki family finds themselves with a new member of the family. Young Mika is dropped off by her uncle (a once rich businessman), while he attempts to get his life back in order. Mika quickly finds that life in the Suzuki home is a far cry from her once high class lifestyle. She also encounters a nemesis/admirer in young Ippei Suzuki.

Chagawa is then summoned for another meeting with Junnosuke’s birthfather. Kawabata has learned that Junnosuke has skipped meals at school in order to pay for bills at home. Before, Kawabata can say anything else, Chagawa makes a desperate plea. He asks for one more chance to provide for Junnosuke or he will forever relinquish his guardianship to Kawabata. Then, Chagawa makes the decision to enter the prestigious Akutagawa writing competition, which awards a large sum of money to the winner.

Although the differences between the original and sequel are slight, those differences went a long way in making the sequel a far superior film. The unbridled nostalgia that the first film attempted to conjure is toned down this time around, as that aspect has already been done. Consequently, the sequel focuses squarely on the characters and plot, which turns out to be surprisingly affective. The impressive CGI drawn backdrop of 1959 Tokyo certainly looks pleasant as well, but the story clearly wins the hearts of the audience this time around.

Making things even better, the ensemble cast fires on all cylinders with Shini’ichi Tsutsumi’s charismatic Norifumi character providing the backbone of the film. The female supporting cast, in particular Koyuki, Maki Horikita, and Kazue Fukiishi, all added the perfect amount of spice to counterbalance the sweeter side of the script.

Nay sayers may point to the unbridled idealism that exists in “Always:Sunset on Third Street 2″ as a critical flaw of the film. For those people I would point out that if its absolute realism you want, try to find it in a documentary and just enjoy “Always:Sunset 2″ for what it is. If a movie is as well crafted as Sunset 2 and it wishes to espouse a near fantasy world of optimism, well than just lay back and soak in all that righteousness. There’s enough room in the cinema world for films like “Memories of Matsuko”/”Secret Sunshine” and “Always: Sunset on Third Street 2″ - clearly a positive and not a negative. I enjoyed this film immensely.