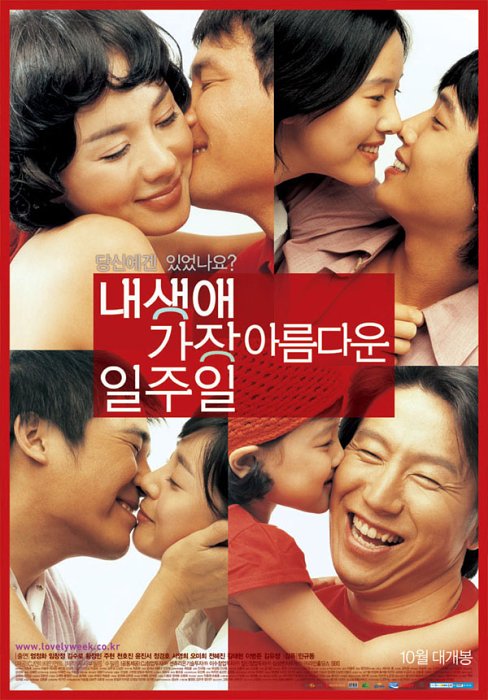 A lovely week in the lives of these people.

An elderly couple. The man (Joo Hyun) owns an old cinema and the lady (Oh Mi-Hee) owns a coffee shop in front of his cinema.

A down on his luck salesman (Im Chang-Jung), who just married. The salesman hides the fact that he sells trinkets on the subway from his wife (Seo Young-Hee).

A bill collector (Kim Soo-Ro) who is fed up with his job. The man is then offered a spot on a local reality television show to relive his college basketball days and also fulfill the wish of a terminally ill girl (Kim You-Jung).

A divorced father (Cheon Ho-Jin) works in the music industry. With only a son in his life, the music executive needs to find a maid. His ex-wife (Uhm Jung-Hwa) is a fiery spirited psychiatrist, who has perhaps met her match with a rough and tumble cop (Hwang Jung-Min).

Finallly a famous male pop singer (Jung Kyoung-Ho) becomes stricken with a mysterious illness after his contract is cancelled by a music executive. He meets a young nun (Yoon Jin-Seo) who tried to killed herself due to her strong feelings for the pop singer.

KI Mar 16 2012 9:47 am A fun, fast paced romantic comedy in the spirit of the British film “Love Actually.” There is quite a handful of characters in this film that cross paths, so you should pay careful attention in the beginning or keep a scorecard of some kind. Anyways the film is a very fast paced comedy, with no dull moments. The relationship between the psychiatrist and the cop, the pop singer and the former nun, and the down on his luck salesmen & his wife, were my favorite characters in this movie.