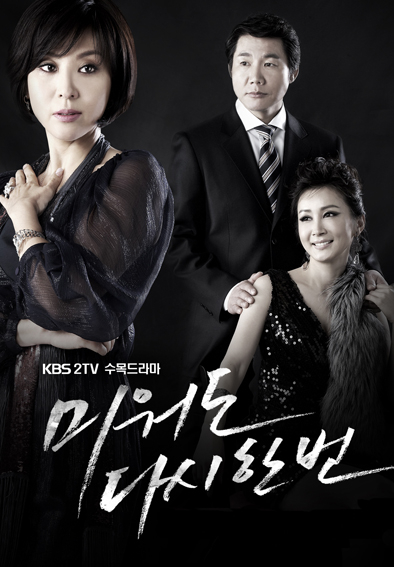 Han Myung-in (Choi Myoung-Gil), CEO of the successful Myungjin Group, and her husband and vice president Lee Jung-hun (Park Sang-Won), seem to have it all ― fame, money and a perfect family ― until Han discovers an illicit relationship between her husband and top actress Eun Hae-jung (Jeon In-Hwa).

However, Eun, who strongly believed that she was Lee's true love, is devastated when she finds out that Lee will no longer see her and has decided to support his wife Han.

Freda Hayes Jan 03 2015 10:54 pm The assault upon Eun Soo-Jun by Jeong Kyeo Woon was inapropriate even for a fictional drama. The writing which attempts to normalize illegal cruel behavior leaves a poor taste in my mouth. The physical size of this man slapping a teenager in her face not once but twice is not entertainment but shameful evil. We are avid Korean drama fans but this one act was over the top.

chrys350 Oct 15 2013 9:45 am On episode3 when Lee Jeong Hoon (Park Sang Won) on the piano sings the song for Han Myeong In (Choi Myeong Gil). The beautiful lyrics and melody brought the tears in my eyes. My husband passed away seven years ago; I miss him dearly. The drama and the song touch deeply in my heart. I would appreciate if I could have the name of the song and the singer. I am a fan of Park Sang Won from the drama First Love (1996), Sand Glass (1955) and many more of his dramas. Please help me search for the song, thank you very much.

J Jun 03 2013 10:01 pm I love the story of the middle aged man and women in this series but I hate the story of the young adults/kids in it. I especially hate that violent b**** Choi Yun-Hee. She goes around thinking she’s better than everyone, hitting people for no reason, etc. My friend was watching the scenes where she kept slapping poor Lee Min-Su, not to mention how she’s always talking down to him the snobby b****, and was like she’s lucky I’m not him. I’d have punched her in the face. LOL. This is the second series I’ve seen PYJ in and I can’t help but think she should just stick to the horrible b**** category or quit. Her face just makes people want to slap her.

sorok Jun 15 2009 3:41 am i am a fan of jeong kyeo woon. i guess he is effective as a drama actor like the role he had in " happy woman". he is not very effective as a " bad guy ". he can effectively give justice to a dramatic encounter. more films for him please. he is talented. give him more breaks.

Sunny May 26 2009 8:55 am Park ye Jin is really good actress. I believe that most people watched it are attacted by her performance.

The ending is too rough.