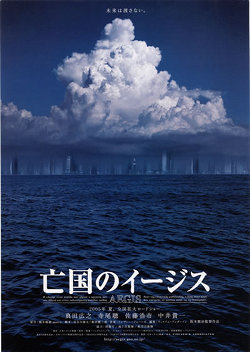 Ignoring his sexually transmitted disease, Mutsugoro travels to his hometown. gliding into the world of his dreams, he slowly loses his grip to reality. are his friends terrorists? And whom can he trust? Welcome to Sono's elaborated dream The Japanese Destroyer Isokaze is heading out to sea to take part in a naval exercise. The Isokaze is unique because it possesses the impenetrable defence system known as Aegis - Aegis was the shield of the Greek God Zeus. This shield protects the ship from any kind of attack, from either air or sea.

Meanwhile the Japanese intelligence community is on high alert. Recently an American made chemical weapon, code name GUSOH, has fallen into the hands of a know terrorist, Major Pao Yeung Fan.

The crew of Isokaze is blissfully unaware of these events as they embark on their mission. One of the key players on board is Chief Petty Officer Senguku. He's the man responsible for the crew. While the other officers spend their time looking at the big picture, Senguku deals directly with the young seamen on board. He knows the crew by heart and monitors their well-being like a concerned father.

One of the kids that captures his attention is Kisaragi, a troubled kid recently assigned to the ship. He's a bit of an outsider, but somehow Senguku manages to reach him and they develop a mutual understanding. Still, the other crew members notice that Kisaragi is behaving a little oddly now and then. Senguku thinks nothing more of this, when suddenly he learns that Kisaragi has barricaded himself in the engine room and plans to blow up the ship. He's told by the other officers that Kisaragi is a foreign agent, but Senguku nonetheless volunteers to enter the engine room and confront the young sailor.

Kisaragi, however, tells a different tale. He claims to be a government agent, assigned to this ship, because the entire officer corps, save Senguku, is in league with the terrorist Pao Yeung Fan, who is in fact already on board with his men and the shipment of GUSOH that he stole. They plan to launch an attack on Japan itself! Senguku doesn't believe him, but the moment he opens the door he realises his mistake. Everything Kisaragi said was correct.

The XO Miyatsu has taken charge of the ship and the terrorists reveal themselves. They capture Kisaragi and force the crew to leave the ship at gunpoint. But before the ship leaves, Senguku makes a quick decision. He jumps out of the lifeboat and swims back towards the ship.

As the darkened ship sails into the night, Senguku makes his way back on board. He is now the only thing standing between the terrorists and the destruction of Japan...