A World Without Thieves 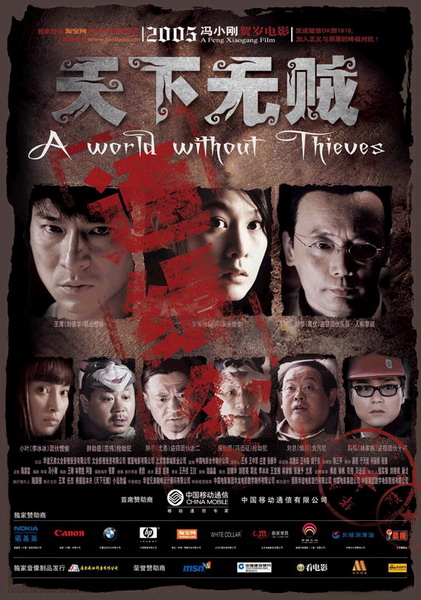 Wang Bo (Andy Lau) and Wang Li (Rene Liu) should have made the perfect Bonnie and Clyde: the former a seasoned con man and master pickpocket from Hong Kong, the latter a grifter femme fatale from Taiwan. Partners in crime and passion, the couple swindle their way across China, until one fine day Li suddenly decides to call it quits, both to her egregious lifestyle and to her entanglement with Bo. It is at this crossroad in their lives and relationships that they run into Fu Gen in a train station, an encounter that will alter their fate forever.

A cross between an eternal child and a country bumpkin, Gen is altogether otherworldly. An orphan since birth, he spends more time with wolves than with men. Guileless and naïve, he believes in the basic goodness of human nature and is convinced that he lives in a world without thieves. Having saved up sixty thousand yuan after five years of toiling day and night in the desert, he decides to go back to his hometown, build a house and get married.

Contrary to his conviction and unbeknownst to him, the train Gen boards is chock-full of thieves. Besides Bo and Li, there is a gang of highwaymen under the aegis of one Uncle Bill (Ge You), a meister of legerdemain from the old school who finds his match only in Bo. While Bill’s men are prowling after Gen’s savings, Li takes it upon herself to be his protector. Reluctantly drawn into this ironic battle of good and evil, innocence and deceit, Bo ultimately becomes much more than he has bargained for: an unwitting hero…

Jack Foreigner May 01 2013 9:03 pm This is a wonderful film in many ways, but best of all it combines an exciting plot with interesting character development. I really liked how the suspense is equally moral as well as physical -- we're not just wondering what will happen next but deeply concerned about the "who" and "why" as well.