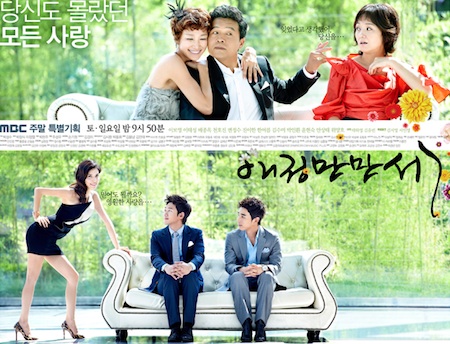 A woman is betrayed by her husband, but she valiantly works to overcome her reality.

Kang Jae-Mi (Lee Bo-Young) led a happy life with her parents, but by the time she was 19-years-old her father had an affair and her parents soon divorced. Jae-Mi promised to her mother that she would never see her father again. Later, Jae-Mi fell in love with Han Jung-Soo (Jin Lee-Han) and married. 3 years later, Jae-Mi tries her best to make a happy family. She runs a restaurant with her husband and for all intents and purposes is happy. Jae-Mi also believes her husband is happy. Due to her parents divorce, Jae-Mi is also firmly resolved that she will never divorce, but, it turns out, Jung-Soo is having an affair with another woman. Furthermore, his mistress becomes pregnant and Jung-Soo wants a divorce. On their 3rd anniversary, Jung-Soo gifts airplane tickets for Guam to Jae-Mi, her mother and aunt.

Byun Dong-Woo (Lee Tae-Sung) is a lawyer, but supported by his mother. He has always been influenced by his mother and sister. Dong-Woo always thought he wanted to be single for the rest of his life. His sister's husband is also Jae-Mi's father Kang Hyung-Do (Cheon Ho-Jin). To make his mom feel better Dong-Woo bought airplane tickets for Guam.

Now both families head for Guam on vacation. On the airplane, Jae-Mi sleeps under a blanket. Dong-Woo mistakenly kisses her, believing Jae-Mi is his girlfriend Seo In-Young. This is their first encounter.

Meanwhile, while Jae-Mi is in Guam, her husband Jung-Soo carries out his plan to file for divorce. He goes to the bank and takes out all of their money. Furthermore, he cancels their insurance to get their money back. The last step in his plan is to get a woman who resembles Jae-Mi to appear in court and agree to the divorce.

In Guam, by chance, Jae-Mi sees her father. This is the first time she has seen her father since her parents' divorce. During a party on their last night in Guam, the two families all run into each other.

Back in South Korea, Jung-Soo successfully pulls off his plan and gets his divorce legalized. Without anybody in Guam knowing about the divorce, they return to South Korea ...

Yoon May 24 2021 3:01 am My gosh got hooked with the series. Had the chance though due to pandemic more time at home. I loved every scene especially when the two main characters are acting. I toyed the idea that how awesome if they were real partners off camera. Sadly they are both married. But just the same I hope to see them together again in a romantic comedy. I am thinking of viewing it again.

jeelei Oct 04 2020 11:15 pm jeelei Why so many titles. Thousand affections very far from bravo my love. Anyway I love the drama very much. Soooooooo in love with Young and Taesung. Very realistic portrayal. Especially episode 20 when the lead actor sung hapi bday to the lead actress. What a refreshing voice. I saw him in king of masked singer. Had to repeat the episode several times. Congrats to all the actors and actresses of the drama. Very good story , the interconnectoins of episodes of various characters are just commendable. Love to see more of Lee Taesung in a similar character soon.

saranghae Sep 01 2020 6:32 am the plot was very poor from the beginning and so uninteresting started skipping a lot so much that i had to dump it by epi 20 to stop wasting my time i only watched it cz of the lead fem but not even she could save this drama for me

ria Jun 02 2020 2:19 am Love the drama especially the love team of lee tae-sung and lee bo young. They are superb. Tae-sung is really very handsome and good actor. He is the reason of the high episode ratings of the drama. I wonder why he is given a very small supporting role in love blooms. Had the lead role been given to him opposite young the drama could have not suffered a very low rating.

mel May 31 2020 9:28 am Nice story the ratings speak for itself. Lead actor and actress and the rest of the cast did their best.

lorena Jul 07 2018 4:05 pm A very interesting drama , wonderful cast but too forgiving for my taste. I would prefer Han Jung-Soo to be punished properly through the hidden past of Chae Hee-Soo in Australia as the plot dictates already from Chapter 16.

KdramaNoona Apr 18 2017 11:58 am I like it until now. But I just don't understand why they are fighting for the trademark of the business name. She could just change the name and start again. On episode 13 now and it's going smooth.. curious to see what will happen next..

Mblaq and MadTown Jan 10 2017 11:10 pm 100% recommended,Does not drag too much and the protagonist is not the typical victim and innocent who does not know how to do anything, is not so dramatic is a very good drama

ToniaB Nov 21 2014 10:04 am The thing I don't just like about this movie is that you can predict the next scene,poor suspense,but the story line was interesting

Oge Jun 12 2013 7:21 am I like watching korean drama but this one stands out,the maturity yet funny.all the actors really put in their best.and they have several plots not concentrating just on the heroin's love life.

curtis Mar 31 2013 7:48 pm i love this drama,my first south korea series i watch was this movie...and ive fallen in love with south korea tv drama shows..at times i wish this "a thousand affection" drama series never ends..its soo sweet,thriling and full of suspense...luv it,luv it...5 stars for this movie

Knotcross May 10 2012 6:49 pm Can anyone tell me the name of the actor that plays Juri's boss from the heath store?

Suryanti Apr 01 2012 7:37 pm Anyone know the name of the love song tthat jae mi dance with boen and paSt 9year ago

Vicky Mar 03 2012 10:18 pm I am so into this drama, but, its getting really depressing at the moment. And I really cant stand Ju-ri and Hyeong-do. I love the little girl though, she is the cutest.

PS. Please add English title for this drama on line Thank you

Alicia Oct 08 2011 11:17 pm Ren-the song is called Donde Voy by Tish Hinojosa. I've been wondering about that too. I just listened to the lyrics very carefully and looked them up. http://www.youtube.com/watch?v=EW4MhlnaYQM

Ren Sep 29 2011 10:07 pm Anyone know the name of the love song that Jae Mi's parents dance to in the movie. It was also played by the band while they were in Guam.