A City of Sadness 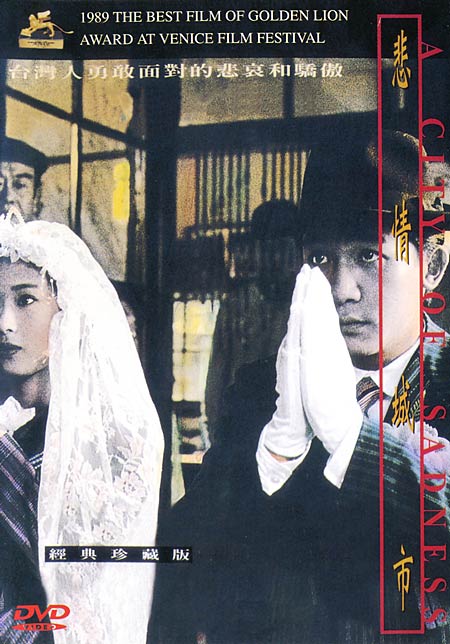 Taiwan had been a Japanese colony for the previous 50 years until the Chinese Nationalist government began taking over the island after World War II. The oldest of four brothers in the Lin family turns his Japanese-style-bar into "Little Shanghai" to cash in on the postwar boom. The second Lin brother disappeared during the war in the Philippines. The third brother, having returned from Shanghai and recovered from a mental breakdown, associates with Shanghaiese drug smugglers. However, when the first brother finds out about this drug business, he confiscates a certain amount of drugs and forbid the third brother to continue his involvement with the Shanghaiese. This leads the Shanghaiese to use their military connections to frame the third brother, who is accused as a Japanese collaborator during the war and jailed. After the big brother reconciled with the Shanghaiese, the third brother is eventually released, but becomes a physical and mental wreck. The youngest brother, Lin Wen- ching, is a deaf-mute, and supports himself with a photo studio. Wen- ching and his circle of young friends are convinced that socialism will the be ultimate tool for the Taiwanese to repel outside colonial forces.

The violence of the February 28 Incident and the subsequent social climate change the family. Deaf-mute Wen-ching is arrested, along with many of his friends. Upon his release, his best friend Hinoe, having been involved in the anti-government movement, is forced to flee to the mountains to join the guerrillas. Wen-ching also wants to join the guerrillas, but is persuaded to stay behind and take care of Hinoe's sister, Hinomi.

Later, the older brother dies in a fight with rival gangs. Shortly after the older brother's funeral, Wen-ching marries Hinomi and they have a son. Then her brother's guerrilla commune is raided by the military and Wen- ching is arrested. The film ends with what is left of the deeply scarred Lin family, living through the wounds by struggling to maintain the mundane basis of their lives.