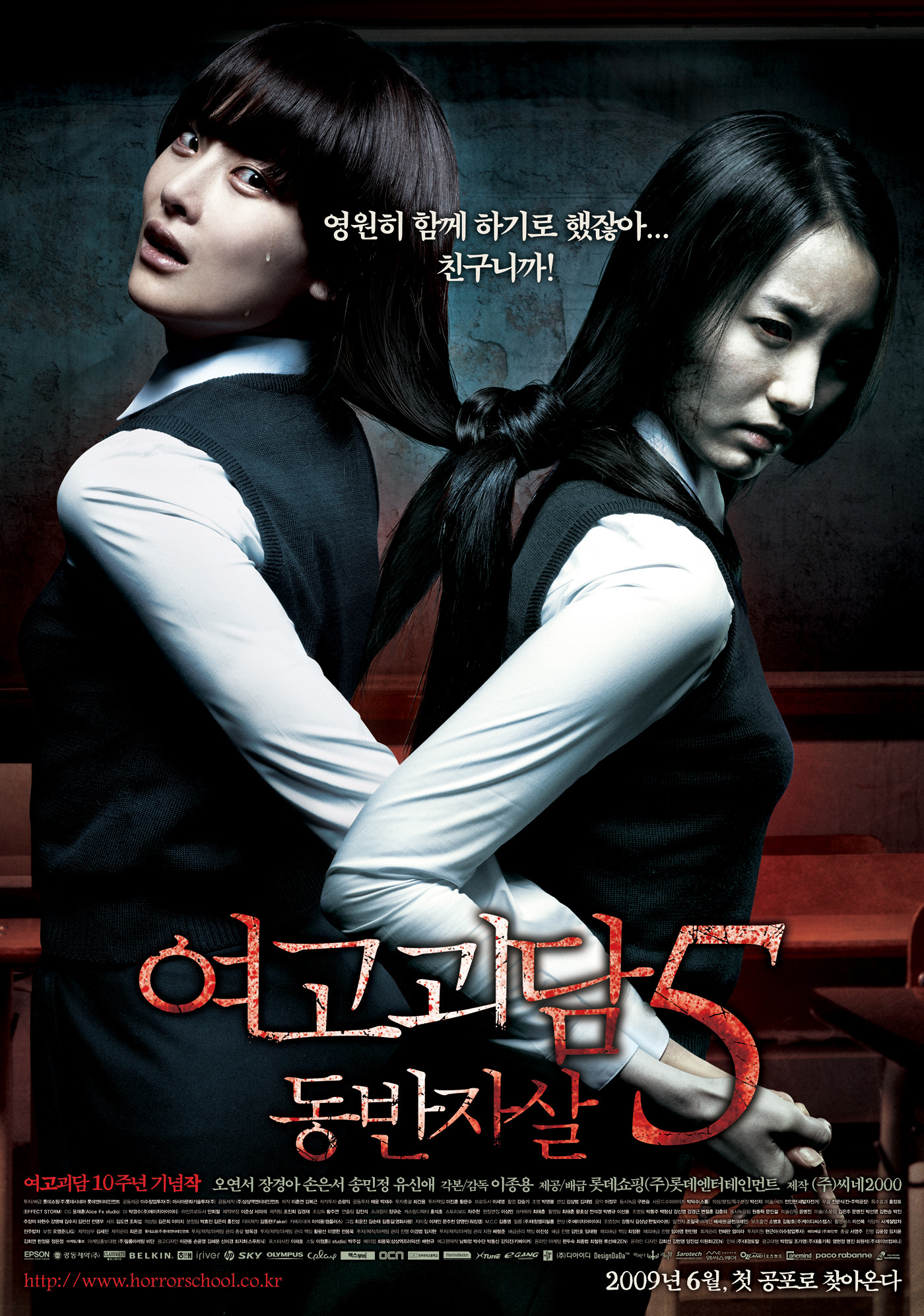 Late one night at a high school chapel, four students makes a pact to kill themselves that night. The girls sign the pact with their own blood and pledge that if anybody survives they will be haunted for the rest of their lives. Then only one of the four students, Eon-ju, actually commits suicide by jumping to her death. The next day rumors fly around their school on the reasons why Eon-ju killed herself. The remaining three girls keep to themselves as they are haunted by their pledge and soon enough the school becomes covered in blood ... 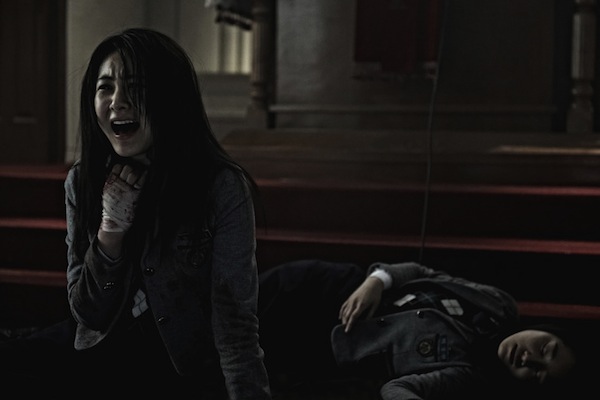 VanillaFrosting Jan 29 2010 12:20 am I've watched all the Whispering Corridors movies (except the first one) within the last few days, and actually loved all.

I thought Wishing Stairs was the most disturbing. I also found it to be the creepiest. I thought the Voice was a little convoluted, but I still decided I thought it was a fairly decent movie (I am a fan of horror and I generally dislike gore, so I can't be too picky as the genre doesn't generally pop out the most logical pieces). I thought Memento Mori was more of a beautiful but sad story more than horror. I liked all of these because they aren't dripping with death and gore. It's odd that my favourite genre is horror yet I hate watching people die and I hate a lot of gore, these movies suit me perfectly because they are nice and creepy, but I don't necessarily have to watch every single character, whether I like or dislike them, die an inevitable death simply because they are present in a horror flick.

All that being said, I watched Blood Pledge not really expecting much, I'd watched the first half hour a few weeks ago, and I just thought it was confusing. I have to say that after watching it, I surprised myself. I actually cried at the end of the movie, and this hardly ever happens. The ending was just so shockingly beautiful. Your heart has to ache for the poor girl who dies at the beginning, and you are never more sure of this than at the ending! (Actually while I was watching most of it I could think of was "Man, this poor girl has really good reason to be so pissed, she should just kill all these jerks!!")

Ki Sep 12 2009 1:59 am “A Blood Pledge” is the fifth installment in the Korean horror film series “Whispering Corridors.” If you’ve been keeping up with the series you’ll probably agree that with each successive release there has been a diminishing return in terms of quality. With that said, “A Blood Pledge” turns out to be a solid film that bucks this recent trend. Taking inspiration from the series’ second & best installment “Memento Mori” (minus the lesbian sub-plot), the film revolves around the hot Korean topic of group suicides. The problem of group suicides is serious enough in Korea that Korean lawmakers have recently banned an entire group of keywords centered around suicide on Korean search portals. While, “A Blood Pledge” doesn’t tackle this issue in any series manner, the movie does use this issue as an effective launching point for its suspense filled 90 minute runtime.

In “A Blood Pledge” a group of friends (or are they?) meet late at night in their high school’s chapel. The girls do what most other girls would do in that type of situation: they light candles, pledge to kill themselves later that evening, and even signs a pact with their own blood. Their ominous last words together are “… if any one of us breaks this pledge may she be cursed to death”. A short while later, only one of the four girls plunges to their death.

The next day, the remaining three girls attempt to keep their pact a secret as it would lead to their dismissal from school. Mysterious events soon start to occur causing the weight of their pledge to hang over them like a curse …

As a pure horror film, “A Blood Pledge” isn’t nearly as successful. Standard shticks for the genre like the sudden movement of the camera to show a close up of a pale faced ghost with a corresponding jump in volume from 0 to 11 is all par for the course. What elevates “A Blood Pledge” from its weaker peers are the mystery elements that gradually unfolds after the movie’s auspicious opening sequence. Exactly why did the four girls pledge to kill themselves? Why did only one of the girls end up killing themselves? These answers are slowly revealed with the lifting of the veils behind each of the girls’ personal lives. Their problems are exaggerated at times, but, nevertheless, common enough that viewers can somewhat empathize with their plight. This kind of response is a bit atypical for a horror film and partially why “A Blood Pledge” is appealing. The final one third of the film does go off on the deep end and your appreciation for it depends on largely on how much reality you expect from a teen horror flick.

Also, you can’t talk about the “Whisper Corridors” series without mentioning all the talented actresses that have made their debuts in the series. “Whispering Corridors” has introduced us to such actresses as Jin-hie Park, Min-sun Kim, Hyo-jin Kong, Han-byeol Park, Ye-ryeon Cha, and Ok-bin Kim. If you’re wondering which actress from “A Blood Pledge” will make a similar jump, my pick would go with Min-jeong Song (the student with the abusive father). Min-jeong Song has an awkward beauty, similar to Min-sun Kim & Hyo-jin Kong in “Memento Mori”, and a certain screen presence that commands attention. With a little more acting experience she’ll likely have a lot more people calling out her name.

When you’re looking for a well done horror film you should keep in mind “A Blood Pledge.” The movie turns out to be better than expected and puts “Ghost Voice” and “Wishing Stairs” to shame. In a way you can think of “A Blood Pledge” as the long awaited true sequel to “Memento Mori” – suicides, cliques, jealousy, rumors and the ubiquitous pale faced ghost all rolled into a crazy 90 minutes.

RazorbladeKiss May 06 2009 2:37 pm omg i love all the Whispering Corridors movies! cant wait to see the next one! i didnt even know there was going to be another... gosh,im so looking forward to it.