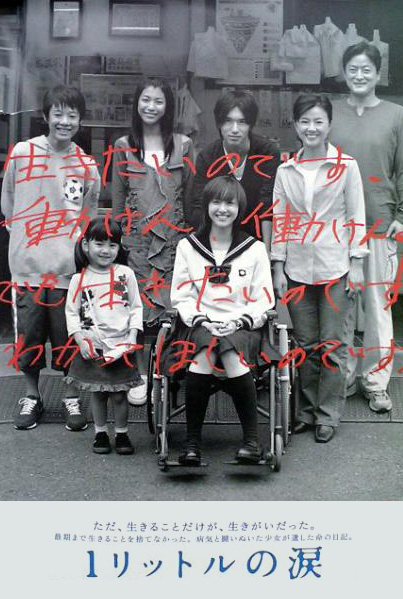 The story of a family whose 15-year old eldest daughter comes down with an incurable disease (Spinocerebellar Degeneration) but puts up a fierce battle to live while bearing up under her infirmity. It also recounts in a positive manner the warm-hearted days of her family, boyfriend and friends who cried and laughed while supporting her. The original work of the same name is a diary that a girl kept after the outbreak of her disease to gain courage in grappling with the illness and including her words of encouragement to her self, her reflections and her words of gratitude that were written until she could no longer hold a pen. The fresh and sensitive texts and poems created a sensation among the reading public in Japan, becoming a best seller with sales of more than 1.1 million copies. Even today, 19 years after it was originally published, it continues to provide the courage to live to many people.

Suzuka137 Jun 15 2018 10:46 pm this drama i don't know howbut the movie was my first ever watched asian drama now i just watchd the drama i just couldn't stop crying for ma minute it's so inspiring if you didn't watch it yet i highly recommend it

kimmy Feb 05 2018 6:50 am i cried a lot inside out.and it gave me a lot to think about,made me realise that i have to be thankful for all i have and live each day to the fullest.am so greatful that i came across such a beautiful story.i loved haruto and aya and all the other cast members as well

Al Jan 27 2018 7:44 am Truly a tear jerking drama. The cast, story line, and everything are just perfect. Each element complete each other. I cried for the whole episodes. A recommended drama to watch.

Arif Se. Nov 12 2017 9:27 pm Finally i finished watch this drama.. This drama is really a tearjerking drama. Cried from the first episode till the last ????. The story sliced my heart into pieces. I love the depiction about the affections among the all family members, especially the mother and the love of Asou for Aya too. Their acting was really amazing.. brought this drama alive. And i could feel the sadness of Aya, her struggles to be alive just like before she had the disease. I hope the real Kitou Aya has a happy life now in her new world.

Adhi Putra Pratama Aug 10 2017 3:32 am The drama is so incredible and makes me always be grateful for the life I have

Peeaare Mar 15 2017 6:38 am Every fckn time watching this drama i always ended up crying like baby , and the ost it's always give me goosebumps when they play it ?

Kira Apr 13 2016 3:29 pm This drama is hard!!! I cried a lot and it made me thinking about life after watching it. Great drama and brave girl as this story is based on a real one.

Leena Jan 16 2016 9:28 am the first and last drama i cried for to Any who wants to watch this drama go for it, it is so amazing gives you a push to become a better person and its very touching PS you will need a lot of tissues

papou Apr 16 2015 10:02 am This drama is soooooo touching and tear-jerking. And I started loving ryo nishikido, one of my first crush! <3

Ciel Feb 09 2015 11:34 am This drama iis the saddestcdrama ever ...it teache us to never give up and dont lose hope I cried so much even i watch it three times it always makes me cry I paass to my other families they cried too >.<

arissah Jul 24 2013 3:36 am This drama really awesome...Aya really a girl with strong hearth,,,i can't stop myself from crying without stop....n i hope one day people around me will watch this drama,,,,drama that make us appreciate our life,,,Go on in live....Life as if u were to die tomorrow,,learn as if u were to live forever...

Aini Apr 17 2012 11:56 pm I love this drama so much... This drama makes me cry more than 1 litre of tears. It tell me how precious this life. We should be thankful because today we still alive and stay healthy. Watashi wa kono dorama o kesshite wasurenaidarou. Arigatou... Ichi rittoru no namida.

Aqua May 22 2011 6:45 am This is the best jdrama i have ever watched. This is not just a drama, but an actual real story that happened to a young girl TT.TT From the first episode i cried till the last episode. People have to watch this!!!!!! You'll know how precious life is and how lucky we are to be alive.

LuvAsianDramas Dec 18 2010 12:56 pm This was my first drama.... I barley ever cry at movies and such but I cried in every episode of this drama(including the special) except for the very first 2 episodes!! x') And, Erika played Aya so well!^^