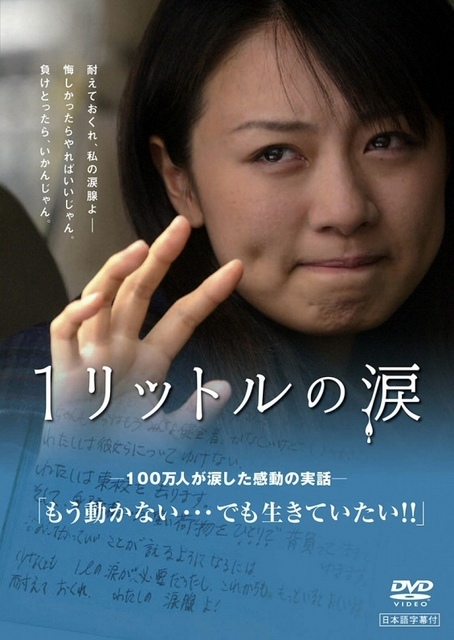 After the tears are shed, a new day begins... Adapted from the same-titled novel, 1 Litre of Tears is based on the true story about a girl's long fight with an incurable disease. A collection of her diary entries, chronicling her experiences and passion and perseverance for life, were published in 1986, and the book immediately became a bestseller. Her inspiring story was adapted into both a hit TV series starring Sawajiri Erika and a moving film directed by Okamura Riki. Promising new actress Asae Onishi stars as the film's tragic heroine, while Kazuko Kato portrays her supportive mother. Keep the tissue box near, as 1 Litre of Tears promises to touch the hearts of viewers with its tragic story and universal sentiments. One day on her way to school, middle school student Aya (Asae Onishi) suddenly falls to the ground. The doctor diagnoses her with spinocerebellar degeneration, a rare and incurable neurological disease. Entering high school, Aya's condition continues to worsen as physical movements become more difficult. Forced to attend a special boarding school, she nonetheless finds hope and happiness through the support of her new friends and family. Working hard, she completes her high school education and bravely begins a new stage in her life, despite her weak health and continuous trips to the hospital. Aya never gives up, living each day of her life to the fullest until the very end.

CFA Jan 14 2021 10:42 pm Most of the comment are mistaken between the movie and the series. The movie is more faithful to the original (real life) story. while the drama have some fictional character on it to make it more dramatic.

aishaTH mish Apr 16 2019 5:33 am wow...really good film..my eyes were filled with tears while i finished watching the whole film

Al Jan 07 2018 7:11 am I've never cried so much when it comes to a drama. This drama is truly inspiring. Moreover, the songs of the drama are good, especially the main song. When i hear that song, my tears was just flow down.

Baia kshiar Mar 02 2016 7:27 pm Its an amazing and heart touching story, but its an inspiring story

Mik Feb 21 2016 11:19 pm I admire her bravery and the strength of her determination to live even she had struggled so much pain to keep herself with her families and friends. she'd never give up but her body does. Thank you Aya for inspirational words and your thoughts. You taught us how keep moving for foward no matter what life would be. Arigatou Aya-san

tony natalizio Sep 24 2014 4:13 pm it is horrible to see young children waiting to die with such terrible pain.to have their whole lives taken away from them.too many people are too ignorant ,selfish towards what they do not like.But i am thankful to the few who do care and see the pain of others.

jessica May 10 2014 3:50 am i feel so sad about her and i realized that we should just live on like aya said. aya wasn't that lucky but she was very strong at any situations that she might encounter. she was very brave fighting her disease. i am so happy about her because up until the end, even though she did not have a happy ending in her life, she was very strong, brave, and very smart woman.

Ikeuchi Tian Jul 07 2013 4:33 am I Love this film. It makes me sad when I remember this movie. Every scene speaks a thousand message. Really amazing. Now I'm so curious about Aya kito.

Ayame Itami Apr 13 2013 5:34 am Amazing story with so many touching scenes. Words can't describe how wonderful, breath-taking and fantastic this film is. It made me aware of the sufferings of those who are not as healthy as I am, and to make me value the life that has been given to me. This a movie that will make you cry not only one litre of tears, but two.

HK Neo Reviews Aug 06 2009 12:25 am All in all, 1 Litre of Tears is a timeless movie about a timeless theme. Countless of times, we have watched sporting teams go against the odds and never stop trying. The Socceroos, Steve Waugh, Justin Langer, Shane Heal, just to name a few, are people who strive towards the never give up category. Aya’s life story shows that this can be applied into life. A true inspiration and a defining tale, that shows the mental strength of humanity and how being alive is a beautiful thing. Yes, there are plenty of downs in your life, but after all if you give up; it means that you will never have a chance. If you try your best, you got the chance of a toss of a coin and moving on without regrets…