The Family Is Coming 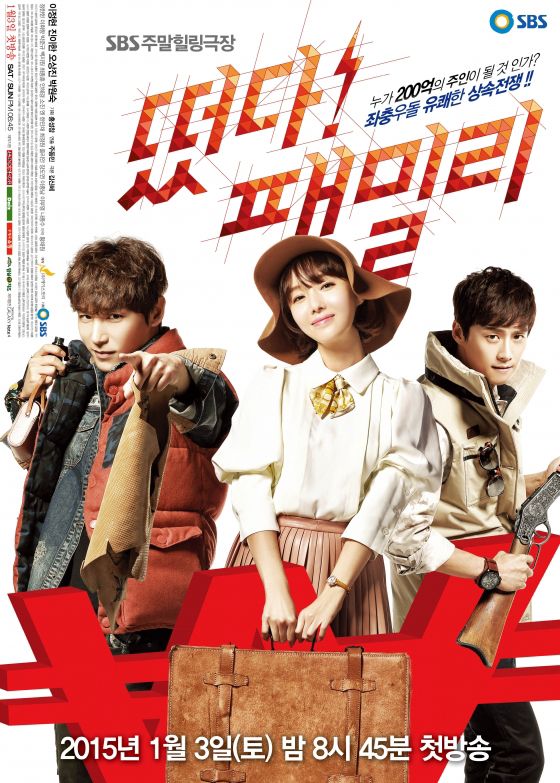 Kkeut-Soon (Park Won-Suk), who left for the United States fifty years ago, returns to South Korea and appears in front of her family. Her family tries to inherit her money.

lrt Apr 02 2019 3:22 am This story is such a relief from the browbeating dramas of late. If you like success stories...then you will appreciate watching it.

zombie Jul 08 2018 2:24 pm dumped this drama by epi 8 i dont want to discourage people but i dont recommend it the storyline is vague and utterly confusing i can only guess the writer is a young rookie with no esperience at all the zero ratings are well deserved this writer should stop making dramas and go back to school

filae Nov 17 2015 6:48 am Boring, unimaginative and a contrived story line that is unconvincing and totally predictable. Not worth the time watching. A theme that could have been such an interesting starting totally flattened by the dead story line. Only the old lady is lovable.

lavendie Nov 10 2015 1:36 am I started this drama because I thought the premise was interesting, and it does look promising in the earlier episodes. I think it would be fair to say that it has similarities with the classic German play The Visit. However the story failed to deliver halfway through, even with Jin Yi Han, the unexpectedly hilarious Oh Sang Jin and other veteran actors. Could be a lot better with much fewer episodes and probably no romance? I just can't feel the chemistry ><

EL Aug 24 2015 8:30 pm Very entertaining drama. Light-hearted and heart-warming. Nothing too villanious. Teaches good values and relationships. Sad that it has so few episodes.

MamaWayang Jul 21 2015 6:40 pm I just cud not feel anything but despair for this drama. The script & the acting are too exaggerated. Even if this is meant to be, it was over the top BORING!! No chemistry between the leads and I do not sense a cohesion amongst the nember too. The lead guy is way too gentle. Seems like he tries hard to be. Even there is no fire when he is angry! Each episode is so irritating!! Sorry to dampen the mood of those who love it but there are so many great dramas in comparison and unfortunately, watching this, to me, is like pulling teeth!

zxcvbnm Apr 26 2015 11:06 pm This drama had POTENTIAL, mainly because of the premise and having Jin Yi Han as the lead. However, it is disappointing to see another weekend drama being so weak in terms of direction and script (another would be Birth of a Beauty). It could have ended grandiosely with just 12 episodes... Still I must say it was a fun ensemble to watch!! Oh Sang Jin is definitely a talented man.

[SPOILER ALERT] The female lead character and the real mother were truly a pain to watch - it's ironic that they were supposed to be the one who "suffered" the most but I couldn't resonate nor sympathized at all. Both characters are mis-casts, in my opinion. Lack of chemistry between the leads as well, although Jin Yi Han made a great effort being a hopeless romantic.

Dera Apr 19 2015 1:53 pm the drama is really great but just till the very end i still couldnt feel the chemistry between the two leads other than that everything was 100% awosome especially hak yeon & oh sang jin xoxo

sinner08910 Mar 28 2015 5:02 pm My first comment on this website. I choose this drama to have my first comment since it is so underrated. People should have this hidden gem a try. So good! I love both MCs. The chemistry between them is so natural and cute! :)

NMS Mar 20 2015 6:49 pm @me Just go to whatever drama's page and ask there when it will be aired. anyways there ae some speculations that the Next Drama will be cancelled.

Nana Mar 14 2015 2:26 am Woooow Jin yi Han is amazing, he is a very good actor so natural. Oh and I love this thing he does with his mouth, he did it in my secret hotel too. I'm really only watching this drama because of him. But I really don't like lee Jung hyun, although this is the first drama I've seen her in, but I really think she's unnatural and annoying. I can't see any emotions on her face, and she tries soo hard to act cute, it really doesn't look good on her cuz it looks so fake. I watched ep 12 today, I really hope it will get better.

only 4 more ep and still can't feel any chemistry between the leads, where's the rom?

yehet Mar 01 2015 5:32 pm I really like this show, it's funny and touching at the same time. And yeah, people can be that greedy. It's embarrassing as heck how low people can go.

Northern Girl Feb 09 2015 1:44 pm This drama is disturbing...why are people so greedy and dishonest? How is the writer going to reconcile the leads? Joon Hee lied and lied and lied to DS for weeks, in a most heinous and greedy way. aarrgghhh. so ridiculous!

you are not the only one. I can't feel anything between the 2 leads, more like acquaintance, not even friends.

TO Lee Jung Hyun fans: PEACE, me not here to bash

ar Jan 18 2015 9:53 pm I just finished watching ep 1 and ep 2 yesterday and I have to say that it has a strong start. The grandma is really antic and jin yi han is awesome as always. This is my first drama I've watched from the lead actress. Is it just me or anybody has the same feel that the lead actress doesn't have a great chemistry with jin yi han? Jin yi han always have a great chemistry with the lead actresses he played with such as kim so eun, ha ji won, and yoo in na. But for me it doesn't work with the lead actress in this drama. Well that's just my opinion. Maybe because I've only watched the first 2 episode. It could be changed when the story progress. Looking forward for this drama. Fighting!!

Nelly Sabando Jan 15 2015 7:05 am nice character as choi dong suk..although different from tal tal still i know you portray as what your character needed..daebak..two thumbs up sir,

Cedric Dec 20 2014 2:47 pm Just seeing Lee Hwi Hyang's name means that she will be the evil villain in this KDrama.

Pandimonium Dec 18 2014 10:02 pm other than the literal title, "Family outing' is used too, and may be more. having to titles irritates me, why tv networks don't come up with just one OFFICIAL translated title,for good ?