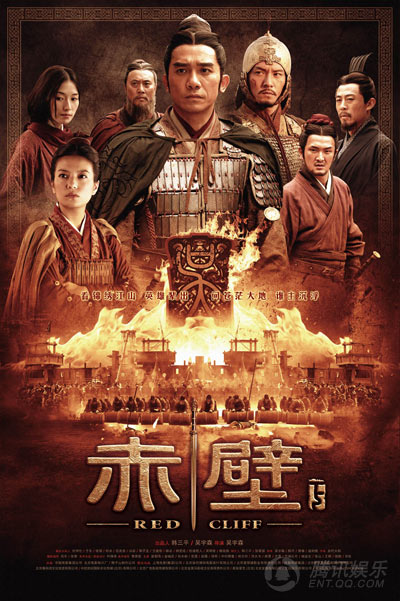 Bitter over an unforeseen defeat to rival states Shu and Wu, Cao Cao (Fengyi Zhang) of the Wei Kingdom is confident that his million-man fleet will crush the under-manned alliance once and for all.

Nevertheless, the allies are still seriously outnumbered and can only increase their chances of winning by attacking with fire. A northwester, however, compromises their plan, as the flames would blow back in their direction. Zhuge Liang, foreseeing an astronomical movement that will change the circumstances, urges the allies to postpone the attack. Meanwhile, Xiao Qiao (Lin Chi-Ling), Zhou Yu's beautiful wife whom Cao Cao lusts after, heads to the enemy line with a plan of her own.

dawn martin Mar 23 2011 3:20 am I really like Red Cliff. Its a sweet portrayal of war and its unnerving reaction on people. Action junkies might look elsewhere because this movie has heart. Im American so I have to pause the dvd sometimes so I can understand what's being spoken. Otherwise im happy this movie was made. I like action movies and dramas and this movie has both and romance. I think a great job was done by all! Director to Actor to Producer.

Ki Mar 01 2009 4:17 am Just six months after “Red Cliff” bulldozed its way across cinema screens in Asia, the second & final installment of John Woo’s epic portrayal of the Battle of Red Cliff comes to the screen as “Red Cliff 2.” While you could have slept through most parts of the original “Red Cliff” (for all practical purposes “Red Cliff” feels like a two hour commercial for “Red Cliff 2″) the sequel does draw you in from the beginning with promises of spectacular explosions and massive battle scenes. It turns out the wait for those action scenes takes longer than expected as the film lays out further background leading up to the fateful battle in the film’s second half.

General Cao Cao, with his 800,000 strong army of northern soldiers are firmly entrenched on the southern banks of the Yangtze River in an area known as Red Cliffs. Meanwhile, the smaller states of Shu and Wu have united to fight there much larger rival. Under the military guidance of Zhou Yu (Tony Leung) and strategist Zhuge Liang (Takeshi Kaneshiro) the alliance have devised a plan that could derail Gen. Cao Cao’s thirst for ultimate power.

Although Cao Cao’s army vastly outnumbers the smaller southern alliance, his men are not accustomed to the climate of the south and are also inexperienced in naval warfare – an aspect critical in winning the Battle of Red Cliff. The alliance then plants Sun Shangxiang (Vicki Zhao) as a spy in Cao Cao’s military base and awaits mother nature to present the perfect moment for their audacious attack on General Cao Cao’s army.

Something that immediately comes to mind after watching “Red Cliff 2″ is the sheer amount of star power presented in the movie, but how little of that star power actually translated into memorable performances. Tony Leung is serviceable in the critical role of Zhou Yu, but by no means will “Red Cliff” be remembered as a watershed moment in his acting career. In particular, his sword dance scene was downright goofy. Takeshiro Kaneshiro’s role diminishes significantly in “Red Cliff 2.” He’s often relegated to gazing off into the distance with a look that asks “I wonder how much my paycheck is worth from Yuan to Yen?” Furthermore, Vicki Zhao, whom I absolutely loved in “Longest Night in Shanghai,” looks completely out of place as the rugged Sun Shangxiang. Also, you’re telling me none of the 800,000 men in General Cao Cao’s army thought it was strange that a female soldier suddenly appears in their ranks? Lastly, Chen Chang could have completely skipped “Red Cliff 2” and I don’t think anybody would have noticed.

The screenplay aims squarely for the masses and, as result, usually opts for the lowest common denominator. Complexity is entirely a foreign concept in the movie with all the characters presented in generic “good” and “evil” fashion. The screenplay even resorts to the extremely trite “I poisoned your drink” trick during a critical juncture in the movie. The only reason why I didn’t believe the drink was tainted because it would have been too obvious – but the General surely didn’t see it that way!

By now it should become clear the focus of the movie isn’t on the characters or the history behind the fabled Battle of the Red Cliff. Rather, the film is made to unleash some extremely pricey pyrotechnics and fancy CG on the movie screen. Even in this area there’s an underwhelming feeling that prevails throughout these scenes. Sure the army formations looked nice and all, but haven’t we seen that in many other films?

So what do you get with “Red Cliff 2″ and its legacy as the most expensive Asian pic ever made? I’m sure a lot of Asians will beam with pride and say the picture has reached parody with Hollywood blockbuster films. I’ll reply back “for better or worse.”

Eun-wook Jan 24 2009 10:04 pm I watched this last Wednesday at a cinema in Korea. I must say that I was completely impressed by Red Cliff part 2. Although I didn't think Red Cliff part 1 was all that great, Red Cliff 1 did make me want to see part 2, and part 2 lived up to expectations and then some. Entire cast was great and the battle scenes were breath taking. Watch this when you get the chance. 8/10