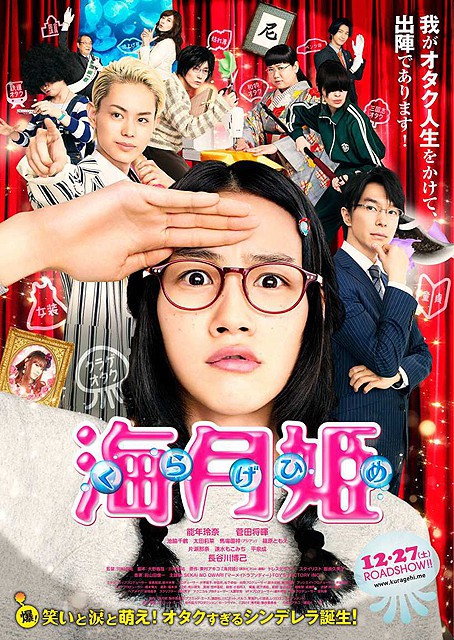 Tsukimi (Rena Nounen) came to Tokyo to become an illustrator. She is crazy about jellyfish. Tsukimi is not very confident and she hesitates around men or attractive people.

One day Tsukimi gets into trouble at tropical fish shop. At that time, a stylish woman helps Tsukimi, but, in fact, the pretty woman is Kuranosuke (Masaki Suda) a male university student. Kuranosuke dresses like a woman because he was raised at the side of his powerful politician father and he does not want to become a politician.

Kuranosuke becomes interested in Tsukimi and Amamizu kan. He visits her at the apartment and hangs out with her. Tsukimi keeps his secret from her neighbors. Kuranosuke helps Tsukimi improve her appearance and she starts to change. leonor linao May 23 2020 9:56 am Very entertaining...enjoyable. At my age, a welcome break from the covid-19 social media craze....aside from its entertainment value, it projects worthwhile lessons for the young.. at first i felt uncomfortable with the tolerance in cross-dressing until i realize that it was just the character's hobby.

Zoe Oct 02 2019 9:09 am Usually i won't watch dramas which the poster shows weird-looking people with the storylines mentioned guy dressed-up as woman falls in love. But I can't stop watching because they are soooo cute and funny , making me laugh out loud as hell with all their expressions. Must watch because it is gives good laugh and attractive story.

Nafeob akfsisgeo Feb 25 2018 2:07 am Suda Masaki is really a great actor! He's very beautiful here. This movie is just too cute. I can't handle it.

Cecille Jun 02 2017 11:43 pm Finally, I watch this movie. I think this movie very enjoyable. I found myself laughing in some scene, when they show the funny expression and weird pose XD And also this movie very sweet, with the characters who is innocent and a bit clumsy. When see they fall in love each other =3 I think this adaptation is good as the manga. I want more (but the manga haven't finish, I hope the author not ruin the ending) ^^

hotarumaruchii Sep 22 2015 5:10 am Yesterday I watched this film and I enjoyed it so much, can't deny that it left me smiling. Honestly, I haven't watch the anime or read the manga so I didn't know if they adapted it well but the film is enjoyable to watch ^^. I guess the thing that I found problem from it was the hastily cuts of some scenes, I know that they are trying to fit all scenes in an almost 2hrs film but there are some parts that cut hastily & not much background music but either way it's still enjoyable. I also like the actresses & actors who play the characters, they're weren't awkward & their acting is genuine but I really appreciate Masaki Suda in here, he literally can do any genre of movies & dramas. Rena Nounen did a good job ^^ I don't think this film needs to be analyze in a critically cinematic way but a film to enjoy ^^

filmbeats Aug 03 2015 2:07 pm Not familiar with the manga but this was pretty funny and the chosen actors were great. Worth it just to watch cross-dressing Kuranosuke.

And Masaki Suda was just perfect for Kuranosuke's role as well as Rita Ohta portraying Mayaya. Rena Nounen did a great job as well, and she was really cute. <3

M's Tsukimi Dec 13 2014 3:54 pm OMG this is a real movie coming out??? My boyfriend and I are making Kuranosuke and Tsukimi cosplay costumes (from the fashion show episode) for a convention this winter! We HAVE to see this!! Someone please send it to Canada! ^_^

christine Oct 26 2014 9:57 am this is literally perfect - practically the anime brought to life~ can't wait to se it!