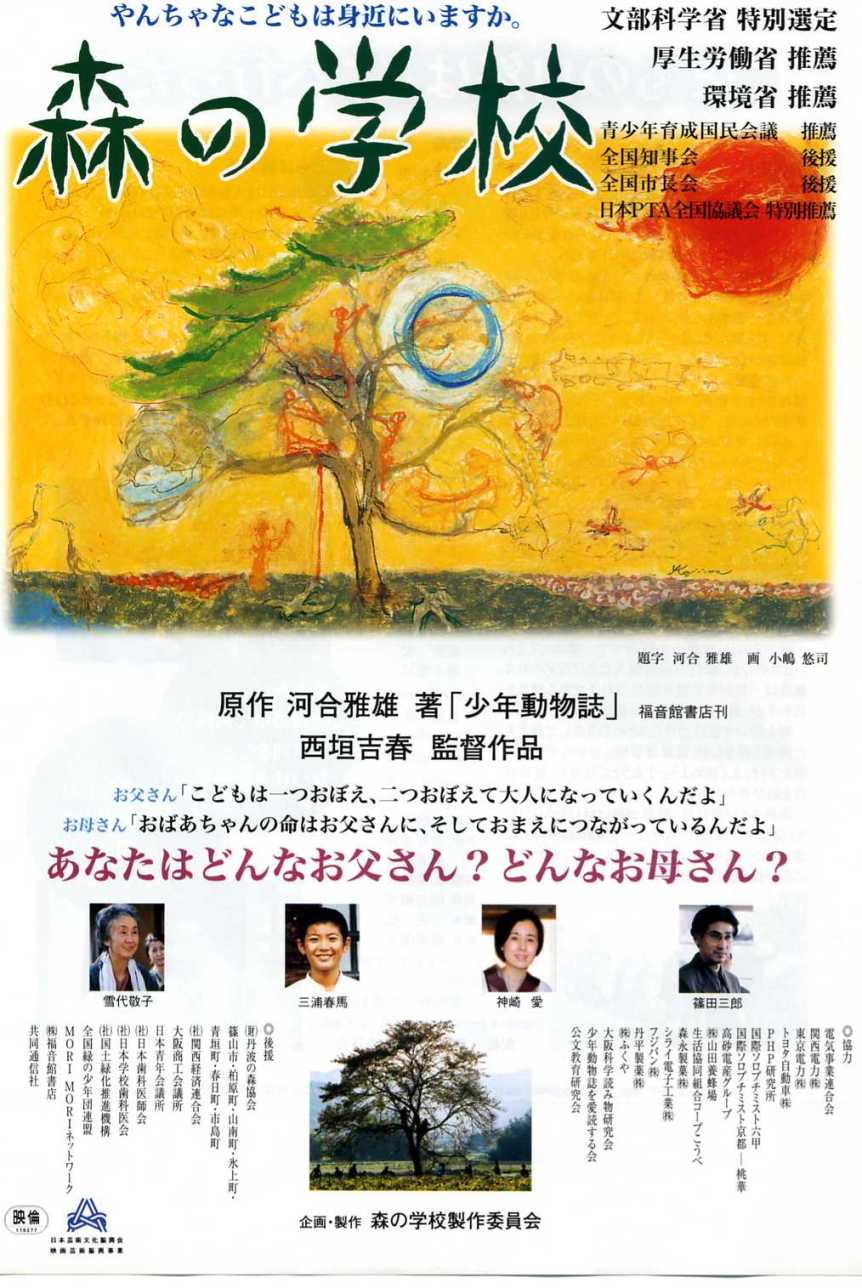 The location is Mount Sasayama in Tanba, around the time of the Second World War. Today, as usual, the excited voices of playing children reverberate around a quiet castle town surrounded by mountains. Though frequently scolded by the townsfolk, the children merely continue their mischievous pranks unabated.

Their leader, Masao, is the son of dentist Hideo Kawai and his wife Shizuko. He’s the third of six children, all of whom are boys. But Masao, the naughtiest of them all, also has a surprising side. He occasionally develops a fever, and is absent from school for a month or even two. And when at long last he returns, he can’t follow the lessons at all. He feels increasingly inferior to his high-performing brothers, and uses abusive language towards his grandmother Sato when she comes to visit him. The only thing that calms Masao’s raging heat is the nature around Mount Sasayama.

While his teachers are concerned about his tardiness at school, his parents quietly support him. They feel that health is more important than anything, and that everyone develops in their own way. Masao and his friends love animals and insects, and his parents even tolerate his plan to create a zoo in their back garden.

One day, a girl called Miyoko joins the school after moving from Tokyo. Being a city child, Miyoko is scared of frogs and insects, and remains isolated from Yasuko and the other girls. She has nothing in common with Masao and his friends, either, and leads a lonely existence.

But then, one afternoon, Masao’s gang, Yasuko’s gang, and Miyoko all take shelter in a Shinto shrine during a ferocious thunderstorm. At first, they keep their distance from each other. Then a peal of thunder rings out. And in that instant, the children all come together in a huddle. The best of friends from that day on, the children spend the summer holidays playing by the river and catching insects together.

The pain in Miyoko’s heart at losing her father in the war is eased when she plays with her friends in this natural setting.

One day that autumn, Hikoyan, the weakest and dullest of Masao’s group, is bullied by Katsuhisa and his gang from the rival Gunke boys. The children go to challenge them for “picking on the weak”. In a one-on-one fight, Masao beats Katsuhisa, the son of a Kenpeitai (Military police) leader.

The other parents, not wanting to get involved with the Kenpeitai, complain to Masao’s parents that their children had been led along against their will.

Hearing of this, Sato hurries to intercede, and the parents’ agitation subsides. But Masao rebukes Sato for apologizing so abjectly and attempting to appease them without knowing the facts, and heaps a torrent of abuse on her.

Later that autumn, Sato falls ill. Masao races desperately to Kuchisakamoto, hoping to make his peace with her. But when he arrives, she is already dead. Masao despairs that he was never able to apologize to her. But his mother, standing behind him, speaks kindly. “She knows how you feel”, she says. “Her life will be transferred to your dad and then you”. Masao is comforted by his mother’s love and the bountiful nature around him.

Autumn ends. Miyoko, who must suddenly return to Tokyo, leaves Sasayama, clutching a guinea pig that Masao gave her as a memento of her stay.

And Masao and his muddied friends continue to run around the woods of Sasayama.