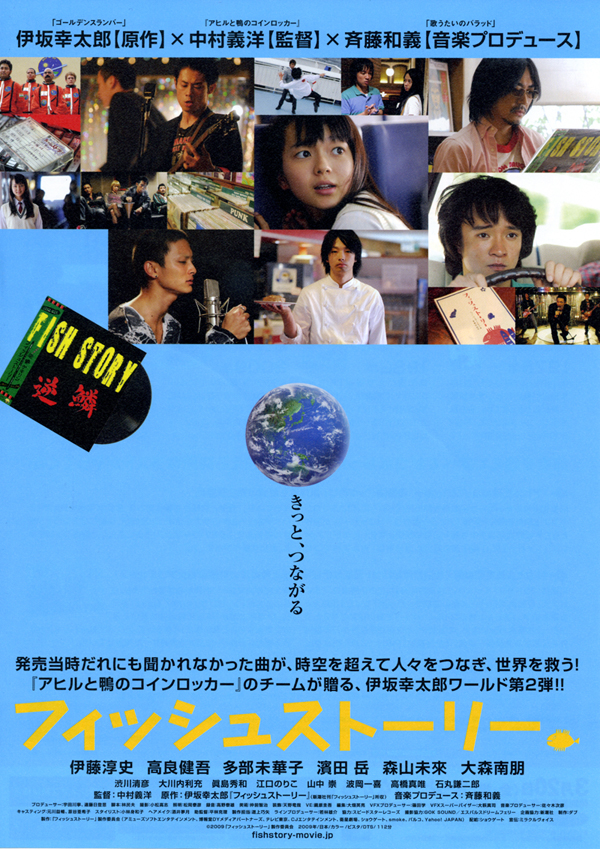 "Fish Story" centres around a rock band from 1975 who decide to break up having had no success, they record one last song before the band splits up. Decades later that song will have a profound effect on people's lives, eventually becoming the saviour of the world. ANDROBETA Jul 08 2013 7:41 am In the cast section, if Nao Omori plays the role of Okazaki then the picture is misplaced. Okazaki is the band's manager, the picture is of his son who becomes the record shop owner. Or are they the same person? O.o

Old-man Mar 21 2013 7:14 am A strange film that appears to meander for long periods then rushes to a conclusion that leaves you amazed and weak with joy...a triumph. Is Mikako Tabe the most beautiful actress in the world? (I'll let others come to theit own conclusion!)

hahahhaha Feb 19 2013 5:09 am this movie is epic, connection between the story so funny

Eyes Scream05 Oct 11 2012 10:08 am My God! This movie is very deep! I love the motivation of every characters of the movie. Even though there is no hope they believe that faith on ourselves will lead to unexpecting results. The one who makes this movie is a genius.

A MUST watch movie also the cast was really great :) The song is good too :)

Firehazard51 Aug 30 2012 12:50 am A Japanese Guy Ritchie film about the first punk rock song ever made. Thats how I sum up this movie. And it turned out freaking awesome.

Michelle Aug 17 2012 2:17 pm Wow! I couldn't explain how I felt after I watched it. The other movie have done that to me. Im very glad that I decided to give this film a chance. I never been so inspired. After I watched it I wanna go down the street and tell every one I see to watch it. But I don't wanna look like I'm a crazy person. Good thing we have facebook.

All the cast are sooooo good.....i love their other movies as well.....