Bride of the Sun 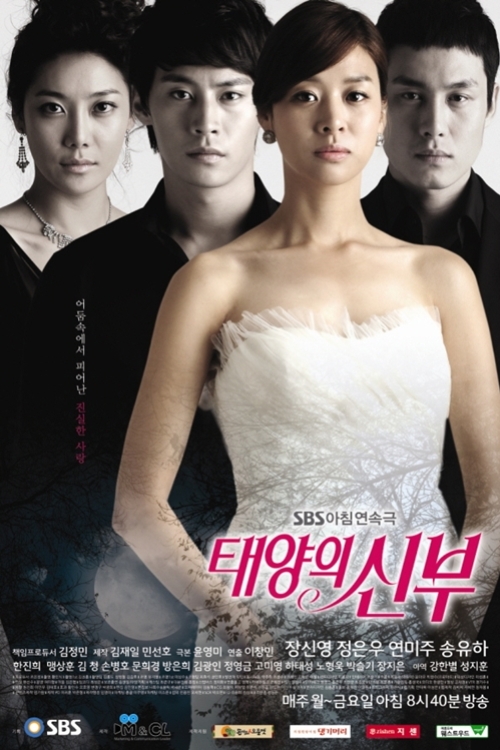 Hyo-Won (Jang Shin-Young) has supported her family for 8 years instead of their weak father and cruel step-mother. Hyo-Won has even given up on her studies to support her ill younger brother.

For the first time, Hyo-Won falls in love with Jin-Hyuk (Jung Eun-Woo), but, in order to save her brother, Hyo-Won must make an extreme choice. Finally, for her brother and father's sake, Hyo-Won marries Lee Kang-Ro (Han Jin-Hee), who is wealthy, but much older than her.

After her marriage, Hyo-Won suffers emotionally from dealing with her in-laws and her husband's ex-wife. Life isn't easy for her, but she is a lot tougher inside than she looks on the outside.

Jin-Hyuk was born in South Korea, but at the age of 5 he was adopted by an American couple and grew up in America. He became successful in the hotel chain business over there. Leaving behind the success he made, Jin-Hyuk has now come back to Korea. When Jin-Hyuk was 5-year-old, he witnessed the death of his parents. His parents died in a fire that was planned and committed by Lee Kang-Ro (Hyo-Won's older husband). Jin-Hyuk has never forgotten that horrific day. After the death of Jin-Hyuk's parents, Lee Kang-Ro built a theme park upon their land. Hiding his identity, Jin-Hyuk now plans to take everything from Lee Kang-Ro.

YOO AH VICKY 7 Jul 25 2017 1:38 pm The leading actor and actress look really good together. I loved their acting in the drama (my heart twinkle twinkle) it's a really good drama 2.

Thuy cao Oct 25 2014 5:49 am I fell in love with theses masterpieces Korean drama ,too . Thanks to all who made and contributed to us the real stories of the long lives Korean societies ,and the Asian alike too.