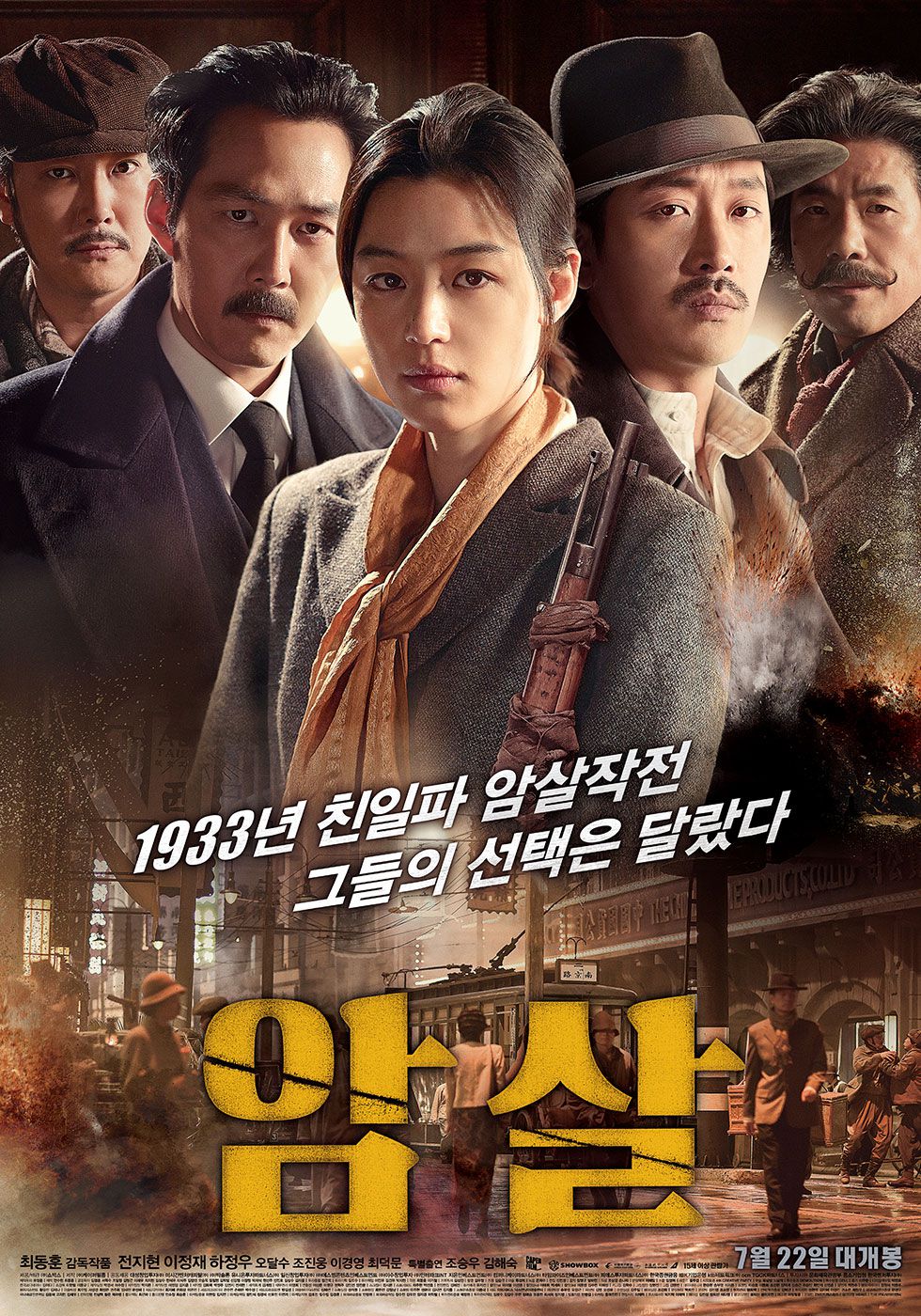 Set in the 1930's, an assassination plot takes place.

The assassination plot is intended to take out a pro-Japanese group. Yeom Seok-Jin (Lee Jung-Jae) is an agent from the interim government. He plans out the assassination plot and gives order to An Ok-Yoon (Gianna Jun). An Ok-Yoon is a deadly sniper and she works with Soksapo (Cho Jin-Woong) and Hwang Deok-Sam (Choi Duk-Moon). She takes on the mission due to her strong desire to see Korea's independence.

Meanwhile, Hawaii Pistol (Ha Jung-Woo) is a contract killer. He and his partner  Younggam (Oh Dal-Su) are hired to take out An Ok-Yoon and her assassination team. XyazK Jun 21 2016 3:28 am This movie is great! At first the story line is a bit fussy i would say but that is just the character introduction and as the story goes by it will draw you into it!

I recommend people out there to watch this

bluefin Dec 17 2015 2:33 pm i dont really interested in korean historical drama movies, but some have caught my attention like masquerade and roaring current.. this one is not as good as them but i do enjoy watching this movie and didnt fall asleep like when i watched gabi.. what good about the movie is the storyline and the rich variety of the characters.. at first it looks like a puzzle but it got connected as the plot goes.. all actors and actresses are superb in their acting, the movie has enough action to depict the struggle of korean freedom fighters and their strategy to battle japanese troops and assassinate certain someones.. if this is based on the true event, i kinda want to know whatever happened to the survived main characters (or should i say survivor, because everybody dies)

enjoyable but not memorable enough..

Erenluffy Nov 08 2015 10:35 am Assassination movie is awesome! Be sure to watch it and vote the movie! Gianna Jun is magnificent and and impressive!

J K Drummond Oct 14 2015 7:47 pm There is mention of an "Irish boat" leaving Korea for Shanghai. Were there actually Irish boats in Asia during the late thirties? The assassin is told to escape on it very near the end of the film.

This film is more enjoyable than the John Cussak movie, "Shanghai", which is set in 1941 mostly before the Jap attack on Pearl Harbor and the Philippines on December 7th (Hawaiian time).

abigailbasao Sep 21 2015 6:26 am i thought i would be bored in this movie but deym so good! i didnt want to watch my love from the star before but i wanna watch it now gianna jun omo!!! i like her character here!!!

CoolBeans May 20 2015 9:14 pm I have always loved the acting of Jeon Ji Hyun. So, I am happy to see her in another intense thriller

lila May 13 2015 2:38 pm The casts are so damn hilarious. I am waiting this movie with so high expectation.

androuchka May 02 2015 1:04 am the movie seems to be interesting! i hope to see you acting one day with so ji sub, jun ji hyun... you are like korean version of Angelina Jolie i mean in your roles' choices( no offense), you are a great actress

nesly joie Apr 15 2015 11:58 am Ohh!!Im so very excited to watch the film of jeon ji hyeon...its so very amazing,cool,beautiful,sexy and hallyu..Hoping to see assassination in here philippines,i wish the movie of my love from the star,are my part 2 ..but Kim Soo hyun and Jeon Ji hyeon is the best couple hyun-hyun couple is my idol...FIGHTING!!!

Kim Mar 25 2015 8:24 am I'm really excited to watch The Assassination! Gianna Jun is really an amazing actress, she acts naturally and shes is the best also in action scenes like in the movie Thieves and Berlin File. Hoping to see this in Philippines!

AC Mar 18 2015 10:50 pm Great, I can't wait for Gianna Jun up coming new movie. She gives me deep impression of her acting skill from "My Love From The Star". This time she played a new role as a sniper....wow!! I'm very excited & looking forward the release of Assassination.

Best wishes & I hope it a great hit and going to break box office for 2015.

DENNIS Jan 06 2015 4:29 am OMO i cannot wait for this upcoming movie of my GODDESS JEON JI HYUN :) ive been following her since My Sassy Girl .. MORE PROJECTS PLEASE MORE APPERANCES PLEASE ...