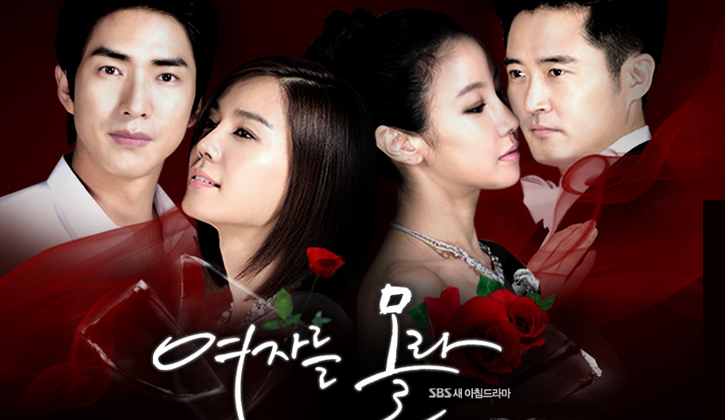 Min-Jung (Kim Ji-Ho) was raised by a single mother with love, even though they were poor. Min-Jung grew into a person who easily believed others and treated them with kindness. She eventually started work as a nurse, where she met Sung-Chan (Lim Ho), who was an intern at the hospital and later became a dermatologist. Sung-Chan then proposed to Min-Jung and they married despite the objection of Sung-Chan's parents.

Living with Sung-Chan's parents was not easy for Min-Jung. Exacerbating the situation was the fact that the couple did not have any children. Sung-Chan's mother treated Min-Jung even worse because of this. Sung-Chan also grew tired of married life.

Around this time Sung-Chan met Yoo-Ran (Chae Min-Seo). Yoo-Ran at first believed Sung-Chan was a single man, but found out that he was married. Nevertheless, Yoo-Ran did not stop and even planned her pregnancy. Finally, Yoo-Ran and Sung-Chan kicked Min-Jung out.

After their divorce, Min-Jung found out that she was pregnant. Without telling her ex-husband about her pregnancy, Min-Jung eventually gave birth to a son named Sa-Rang (Goo Seung-Hyun) and raised by him herself. Min-Jung worked hard to succeed as a lingerie designer. During this time she met Moo-Hyuk (Ko Se-Won) at work. Moo-Hyuk is the son of lingerie company Flora.

Meanwhile, Yoo-Ran suffered through several miscarriages and after that Yoo-Ran could not conceive a child. Yoo-Ran did not tell tell her husband or parents-in-law about this. Then, Sung-Chan found out about the existence of his son Sa-Rang. He also became jealous of Moo-Hyuk. Sung-Chan then decided to get Sa-Rang back and, at first, Yoo-Ran did not like the idea, but then agreed to help Sung-Chan take Sa-Rang back ...

perfsfecta Jul 04 2014 12:05 pm I watch this without subtitle, eventhough I don't speaK korean. I'm enjoying it too much. I always squeal when i see romantic moments between Min jung and moo hyuk (love love love). And I have those two sisters so.much i want to slap them sometimes haha.. And I have to say, I love.Kim Ji ho's hair and character here. I'm a big fan of hers. I watched her two other shows and i loved her acting, hope she gets more shows.

tia Mar 01 2014 10:04 am this series drama gets myself mad. it's really addicted. i can't stop thinking about it all day. I can't wait to watch this drama every 8 o'clock pm. it's difficult for me to watch this series by internet because the signal too poor, south korea is too far from my country. i also can't find the series in youtube. it's make me frustrated. please..somebody, upload all series in youtube with english subtitle, thanks a lot for your kindliness.

mari Feb 08 2014 2:30 am this series teach us a lot. love the plot and love minjung's hair. actually we don't really like the player of Moo Hyuk character but after some watches we do love him now....

nwe Jul 20 2012 7:20 am Hi, Ko Se Won, i have never watched such a good series U don't know women. It is the one i like best indeed. U were so handsome and so talented and please keep up this status forever. Wish u always get success and hope to see u in more and more Korea drama series as a main leading actor.

siti Jul 26 2011 9:05 pm I enjoyed watching this drama every minute of it. The actors & actresses played their character very well. I had a crush on Moo Myuk! I love watching Moo Myuk and Min Jung very much! I reckon others to watch this drama and believe they will enjoy it as much as I did! Bravo to the production crew!

Randi Jul 20 2011 4:55 pm I wish there were more shows like this one...this was one of the best kdrama's i have watched so far! It is so addicting! i am trying to look for the theme song but im haveing a hard time can anone help find out what the name of the ssongs they play on this show is called? THANKS :D

kdrama90s Apr 20 2011 3:53 am Kim Ji-Ho was one of the first actresses I saw when I started watching Korean dramas back in the mid-90s (when they had heavier makeup with darker lipcolor). I have always liked watching her. I was thrilled to find her pairing up with Ko Se-Won, who is now one of my favorite Korean actors. The two have great chemistry on screen in this drama - Moo Myuk's and Min-Jung's facial expressions sometimes make me laugh. I am really enjoying this show every week. The drama is being aired in my area every weekend and I also watch the newer episodes online. It is a funny romantic drama with interesting twists when it comes to Oh Yu-Ran (Chae Min-Seo) and her sister. An interesting and enjoyable drama!