You Are So Pretty (Korean Drama) 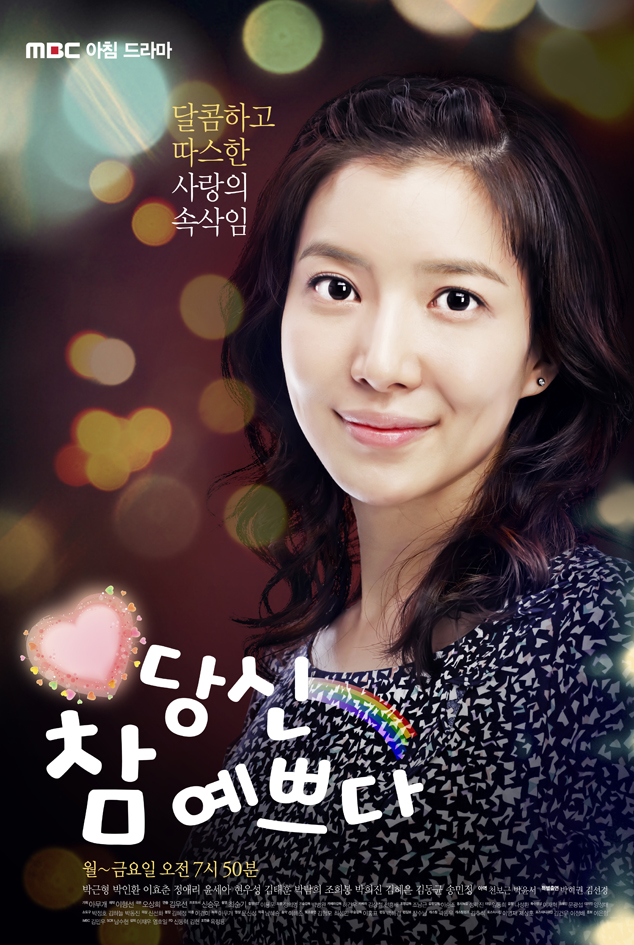 Ko Yu-Rang (Yoon Se-Ah) is a bright and positive woman. She grew up in a family as the second daughter. As a young woman she wanted to attend college and major in painting, but because of her father's objections she was unable to pursue that goal. Eventually, Yu-Rang worked as a contract worker at at a resort in Jeju Island. At this time, Yu-Rang became interested in sugarcraft, baking involving sweets. While trying to learn this new craft she met her first love Chi-Young. Suddenly, Chi-Young left Jeju Island and returned to Seoul. Yu-Rang, unable to forget about him, travelled to Seoul to propose marriage, only to learn that he was already married.

Park Chi-Young's (Kim Tae-Hoon) only goal in life is to attain wealth. Until his senior year of high school his family was wealthy. After that time, his father's business failed and Chi-Young's family fell into financial difficulties. Chi-Young learned firsthand that being poor was difficult and brought unhappiness to himself. Since that time, Chi-Young has been driven to achieve wealth. Chi-Young never fell in love as a young a man. He had a blind date with Jo Ahn-Na (Park Tam-Hee). He was attracted to her wealthy background and eventually married her. His wife was unable to conceive a child and she asked for a divorce. Chi-Young did not want to become a failure with his marriage. Ahn-Na was afraid Chi-Young would leave her. During this time, Chi-Young left for business to Jeju Island. There, for the first time in his life, he fell in love ... with Yu-Rang.

Byeon Kang-Soo (Hyun Woo-Sung) is bright and free-spirited person. He constantly has disagreements with his grandfather who owns a franchise restaurant company. Because of this, Kang-Soo lives with Dae-Poong and his son. Kang-Soo doesn't want to get married and has no interest in raising a family. He goes to Jeju Island for a meeting with his grandfather. On Jeju Island, Kang-Soo meets Yu-Rang. They happen to live in the same house. To his surprise, he sees his mom in Yu-Rang ...

Michael Aug 07 2020 11:40 pm Such a great drama series. Educate you about aspect of humanity, life, wealth and family. This drama series also educate you about how secrets and wealth can come between one perfect matched relationship at any cause. I ve enjoy every episode.

Michael Aug 07 2020 11:38 pm Such a great drama series. Educate you about aspect of humanity, life, wealth and family. This drama series also educate you about how secrets and wealth can between one perfect matched relationship at any cause. I ve enjoy every episode.

Jinjoo Jun 27 2020 8:14 pm I've been a fan of Hyun woo sung & didn't realize till now he's in this drama so I'm gg to see if this is available online! he's such a great actor, handsome & all that but he seems under-rated even now! Hope we'll see more of you! You're a great actor & you have a lot of potential! aja aja

minoz Jan 17 2017 11:09 am me first korean drama i will love this drama forever and never forget this drama

rose Aug 07 2013 11:08 am I like you are so pretty drama.l watch this drama every night.hyun woo sung is so cute and nice.he has beautiful face and greatbody.l like him so much.fighting woo sung......

hibiscus Jun 24 2013 5:13 pm i want to watch this drama so much bcoz of hyeon woo sung who i admired in yellow boots & heaven's garden however it seems it's not available online anymore! if anyone have seen this please post the site here thnx

Kim Jun 16 2012 8:01 am I'm glad I found this page. Now I can put the names with the faces. I do not speak the language but the program is very interesting and for the most part I can follow the story but I know I would enjoy it more if I knew what they were saying.

seaann Apr 20 2012 6:30 pm This drama has a wonder story line. If I understood what was really being said that would be even better. Thanks