You Are My Destiny 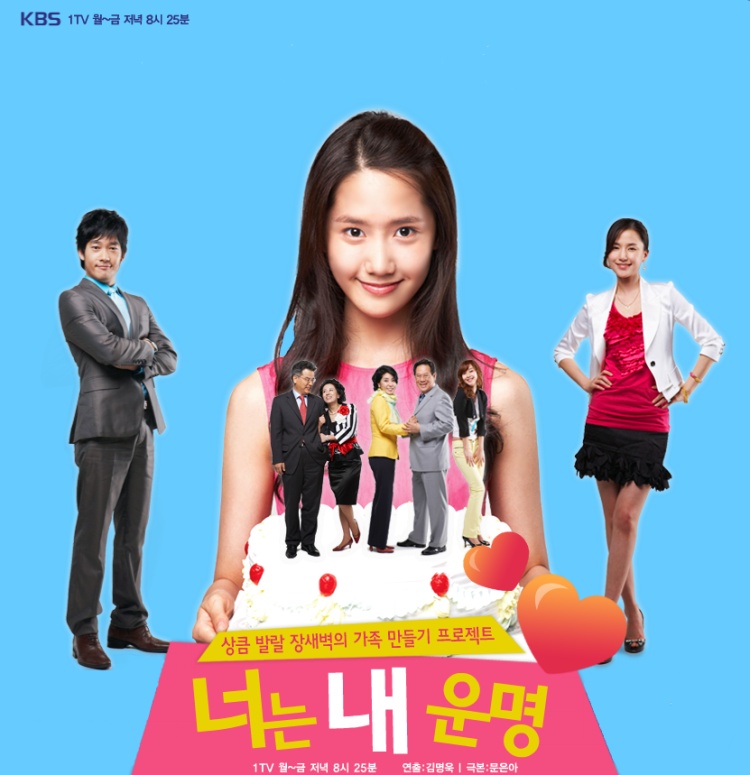 Kim Baek Jung Dec 26 2015 8:21 pm This is the best korean drama that i watch all my life thank you for showing this for everyone and all around the world... Greetings from philippines. :D Saranghaeyo!! Gomawo. :D

She is also in nooble woman.

I skip watched it in a day.

Nkolika,Nigeria Jan 04 2015 11:06 pm The drama is interesting and yoona's acting improved in this drama

DanielleV May 26 2014 12:10 pm This started out good, but I think they made it way too long and the lead male character wasn't very good at acting and wasn't very attractive either. I gave up after watching almost half of the series. I skipped ahead and watched bits and pieces 50 episodes ahead and still had a decent idea what was happening. This was just one drug out too long drama. Yoona was very good, but it wasn't worth finishing.

Toni Mar 04 2014 11:33 pm Great drama. Has everything. Love, romance, sadness, happy moments, funny moments (some of the characters are hysterical). Lot of episodes but they went by fast. Fell in love with all the characters and will miss them. Love Park Jae Jeong. Towards the end a year had gone by, what happened to Su Bin's doctor boyfriend who was to return from Africa?

Diane Jun 21 2013 11:49 am I loved this story line. It taught my Chinese daughter to learn English because I taped each episode. She learned to read faster and understand English. Yoon-ah was such a sweet girl who is truly pure of heart.

steve in philadelphia Feb 04 2013 12:51 am this was the show that got me into SNSD because of Yoona. Gaaaahh now I am addicted!

I am currrently watching this drama..

this drama is very very touching..

Well acted by everyone. My favorite character - along with Yoona- her birth mother I wish she had a long role.

Maricar Aug 15 2011 12:11 am I love this family drama. Thanks to all the wonderful cast and the people behind the scenes. My family and I discovered this beautiful real actress Lee Hye Sook in this drama. We all laughed at her weird character. My dad liked the way Mrs Kang acted bec. she was always prim and proper being the wife of the Lohas president. Even if she is mad she knows how to compose herself. Yuri and Taepoong are a good match bec.they are happy go lucky and not being too serious with things unllike Hose who hardly smiled and laughed in the whole show.

Halmunee gave us a good laugh since she always say "aigoo..." and causes trouble sometimes. But the other times she gives joy to the family.

Soyeong's family is lucky to have their mom bec. she is very stable, respectable and loving. I think she is the only one here who didn't cause too much trouble. :)

Most of all, we really loved the handsome cold husband of Hong Yeonsil- Kim Daegu. The 2 are such a very beautiful and cute couple.

I really like syebyuk n hoshe....the momment they were always be togather....really make me happy

Butterfly Aug 06 2010 10:44 am I absolutely love this drama! Yoona has become one of my favorite Korean actresses! The storyline of this drama was very interesting. I'm hoping to watch it again!