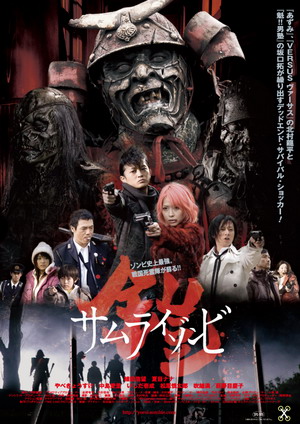 A family on a road trip comes across a car accident, and pulls over to help the driver of the car. It turns out that the driver is a fugitive, who hijacks the family's car. Pointing a gun at the father's head, the fugitive commands him to step on the gas and drive off. Guided by the fugitive, they soon encounter a blockade on the highway, so they take a road into the woods. All of a sudden, the car's navigation system monitor turns blood red. The blip on the monitor seems to be moving around in a sea of blood. Then the car breaks down for no apparent reason, and they're stuck in the woods. The fugitive tells the father to go look for tools to fix the car with, while he holds the rest of the family hostage. Having no choice, the father starts walking. Soon, the father finds a ghost village. He walks up to the top of a hill from where he can look down at the village. It looks like there's a cemetery up on the hill. He digs in the ground, and finds a rusty knife. He brings the knife up to his throat, and cuts off his own head. Blood splatters. The decapitated head falls down onto a tomb, and blood runs into the ground. After a moment, a razor-sharp Japanese sword comes out of the ground, and then an eerie samurai warrior crawls out of it. The samurai zombie chops up the father's head, then starts heading for the car. Meanwhile, the rest of the family and the fugitive have wandered into the woods. Their presence here is no accident - they were summoned. A rain of blood is about to wash everything in the village away with a curse and vengeance!