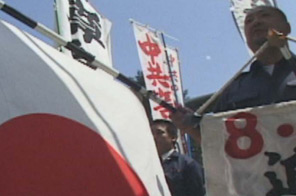 Yasukuni Shrine was constructed in 1869 to commemorate war victims and remember the spirit of Japan. Today it also enshrines the memory of World War II war criminals. Its mere mention stirs pride amongst Japan's right wing, but it recalls pain and anger amongst the victims of Japan's war campaigns in Korea, China, Taiwan, and the victims within Japan itself. Recently, ex-Prime Minister Koizumi's official tributes to Yasukuni have stirred international controversy. LI Ying's Yasukuni is the first documentary to tackle the issue of the contentious shrine. A result of 10 years of living and doing research in Japan, the film presents each contrasting opinion about Yasukuni - the right wing militants who long for the past glory days, those who oppose them, and the victims of war. Rather than simply line up these different viewpoints, Yasukuni approaches the symbolism of the Sword and the Emperor, dissecting the meaning that the shrine holds in the Japanese unconsciousness.