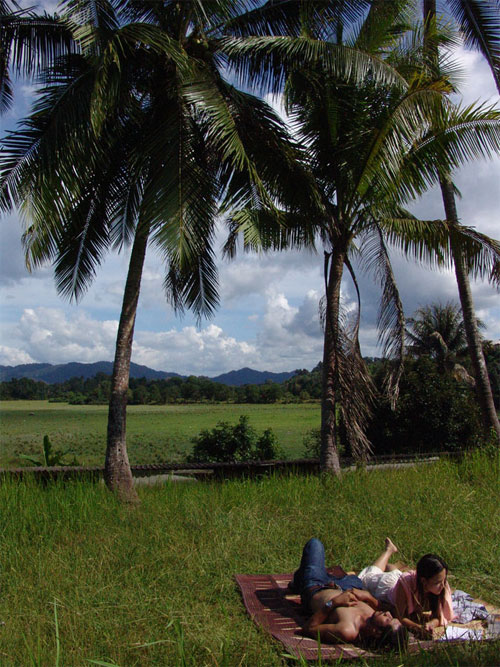 Takua Pa is a small town in the South of Thailand. It is a town of sadness. Ever since the tsunami, people have lost their jobs. There is nothing to do every day. Young people ride motorcycles around in circles. Old people remember better times in the past. One day a stranger comes to town. His name is Ton. He is an architect. He rents a room in a small hotel owned by Na, the town daughter. They begin to have a secret love affair but soon people start to whisper. The town has found their enemy now. This film is about a love that grows where there is no more love, like a flower that grows in the dirt. And about a town that tries to destroy the beauty that it cannot have for itself. Can a town be wonderful again?

Wonderful Town was inspired by the town of Takua Pa in the south of Thailand. It was here that 8000 people perished in the 2004 tsunami. But when I went to visit two years later, there was a strange feeling. The town was very peaceful and beautiful. All the reminders of the tsunami were gone, as if the people wanted to throw away the memory. The roads were repaved, the houses were rebuilt, the coconut trees swayed in the breeze as always. But though the town looked new, the people were not. I felt that everyone was still walking around in a daze, like they just woke up and couldn’t remember how to get home. The town’s economy was still ruined as the tourists had not returned to the beaches. It was a strange sadness – a town of sadness. So it was this atmosphere that I wanted to document. It’s my own way of making a tsunami movie. -- Aditya Assarat