With the Dog Tag and the Croquette 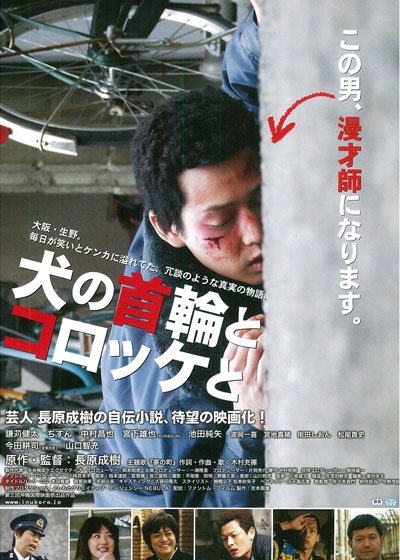 Seiki (Kenta Kamakari) was born in Ikuno-ku, Osaka to a Korean father who fed him everyday with croquette and kimchi. Seiki grew up as a wayward child with his partner Tasuya (Junya Ikeda), bookworm Toshi (Yuya Miyashita) and rival Toshi (Masaya Nakamura). He fought frequently and committed burglaries until being placed into a youth detention center.

Once out of the youth detention center, Seiki met female officer worker Michiko (Chisun) through his friends. Seiki soon fell in love with Michiko and decided to change his wayward ways. Even though his rival Yamato continued to challenge him Seiki avoided trouble.

Seiki's friend Tatsuya always wanted to become an entertainer and one day introduced Seiki to take part in standup comedy. Seiki felt a sense of rush and accomplishment when he made the audience laugh. Seiki now decides to pursue a career in entertainment. Meanwhile, Michiko holds a secret from him ...