Will It Snow For Christmas? 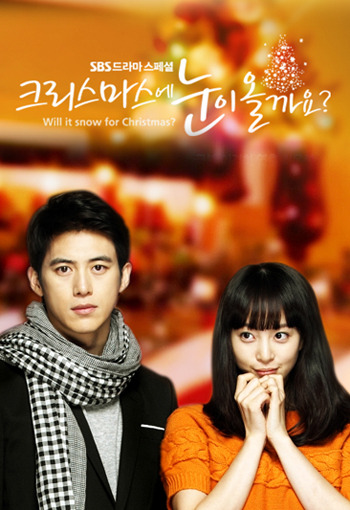 "Will It Snow For Christmas?" covers the romantic relationship between these four main characters:

Cha Kang-Jin (Ko Soo) grew up without a father and had a difficult childhood. As a teenager his mother Chun-Hee moved Kang-Jin and his brother to her small hometown of Sancheong. Chun-Hee then opens up a cheap coffee parlor ("dabang") that attracts men. In Sancheong, Kang-Jin meets Ji-Won (Han Ye-Seul) whose father practices traditional oriental medicine.

Kang-Jin and Ji-Won feel attracted to each other, but tragedy soon strikes. Kang-Jin had a cherished pendant that belonged to his father, but the pendent is accidentally dropped into the river. Ji-Won feeling pity for Kang-Jin, asked her brother Ji-Yong to retrieve the necklace from the river. Ji-Yong, while attempting to retrieve the necklace, then drowns to death. Grief stricken Ji-Won then runs away from town, but first tells Kang-Jin that she never loved him or liked his mother.

Susan Apr 01 2017 5:18 am I don't like all character of their parents in this drama.. Too selfish, childish, not thinking about their children's the happiness...

But all actors did well..

MamaT Jan 31 2017 9:50 am Frustrating drama. Unsatisying final episode and it's about five episodes too long.

For someone from the U.S., story lines with parents controlling adult children is very frustrating. Why would parents be happy when they are making their kids miserable?

I enjoyed the actors.

and that's why the most of Korean drama should focus mainly on the children.

Radhika Jul 04 2015 6:00 pm I really liked this drama. The actor did a really fine job. I watched this drama about 5 years ago. And still remember it. Such emotional and touching dramas are no longer made. I wish there were more dramas such as this one.

ace Nov 23 2014 9:29 pm I watched this because Han Ye-Seul was in it. And while she is good enough in, it's the mother that stole the show. She really impressed me a lot. But even with those two in lead roles it wasn't enough to save this drama for me.

nth Jan 20 2014 3:11 pm The storyline is pretty good, but I don't like the ending. Somehow, I find it a little abrupt (?) =.= I would prefer an opening ending. Anw, its OST is simply great :D Oh, does anyone remember in which episode Kang Jin sang for his mother via mobile phone? (sorry for my bad English T.T)

tan Nov 08 2013 10:23 am lee jun ki met kim su hyeon in this drama,, i very impress with the writer but, some part is too random, not smooth story line,, but make me surprised with the story,,, i think it good to remake with better plot, cha kang jin become han ji young from teen..

JC Apr 03 2013 11:53 am This drama was absolutely wonderful, top rate series. I was surprised at the pace of the plot, it didn't drag and was just perfect. Also, for you kdrama fanatics, this series has the magnetic grab that after every episode, you just want to keep going and going to find out what happens next. Highly recommended drama!

Gasenadi Aug 17 2012 2:06 pm "Notorious Chun-hee" was my reason for watching this after Ep 10/11. I cared less for the leads and more for Chun-hee. Actress Jo Min-soo NAILED this role! Her character could've easily been nothing more than a buffoonish caricature yet Jo Min-soo made her the most poignant, complex mother I've seen in a long time, in any movie or drama. The things she can do with her face! Broke my heart many times while watching. All kudos are for HER.

Marika Dec 16 2011 5:28 pm Maybe someone could tell, what is the name of the song that is played at the end of every episode during the whole serial? Please, I just can not find it...

christmas Nov 03 2011 2:59 am Great Drama and Han Yi Seul is so gorgeous! I thought the ending could have been better though, but at least we know they end up together. However, does he still end up going to the middle east for 3 years and return back to her? Or does he not go to the middle east all together? I think that would be lame if he makes their relationship wait another 3 years for them to finally be together.

kkyy Oct 22 2011 2:25 pm I loved this drama. Great actors/resses. Really sad but I thought the ending was good when you sum everything up. I still can't get over it. It's a great drama.

Riisa Feb 12 2011 1:25 pm oh why oh why are the second leads whether girl or boy are always better lookin' than the first leads?!

yuii Dec 30 2010 2:48 am Ahhhhh I feel so cheated! I told my friend I dislike tear jerkers yet she recommended this drama. After starting epi 1, I couldn't stop watching and had to download the rest ToT ...it ripped my heart when Ji Young died.

ROSWATI MAHMUD Apr 26 2010 2:22 am Nice drama with very good actors and actresses. Even though a bit stress in the conflict but the story is successful in giving thought of how people should learn. Cha Kang Jin role is perfect son to his mom/family. I wish that my son will act the same. Lesson learnt: Love mom/family Patience and sacrifices paid with better life/happy ending even tough at later stage. Friendship and understanding. The best part of this drama is no bad acting/feeling. Professionally adapted by characters of educated and loving persons. I like this drama. Best Scripts. Thanks to all who has made this nice drama/story to watch.