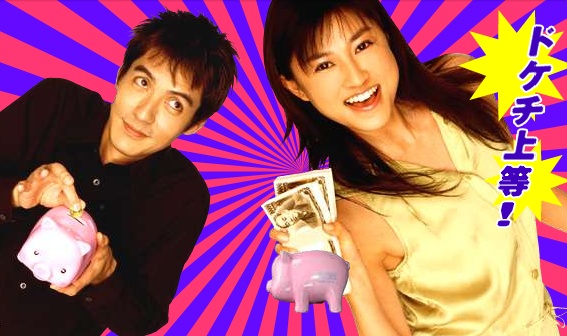 Ayame Tamaru (Rei Kikukawa), an office worker living near Zeniaraibenten, a shrine in Kamakura famous for bringing financial luck to worshippers, is absorbed in washing numerous bills spread over a bamboo sieve. It is popularly believed that if you wash money at Zeniaraibenten, the money will grow and multiply. Back home, her room is filled with artifacts showing her peculiar hobby: salt piled up high to bring in good luck, and on the wall, a scroll is hung with a calligraphy featuring her motto, "Stinginess is a virtue." Numerous 10,000 yen bills are pasted behind the scroll for additional good luck. Declaring that the goal is to save 10 million yen, and believing only in money, Ayame is dedicating all of her waking hours to saving money.

One day, a young man suddenly appears before Ayame. Named Shinichi Kaneshiro (Ikki Sawamura), he and Ayame used to be lovers. Five years ago, he asked her to marry him but was turned down because he was poor and had no money. By coincidence, her former boyfriend is hired by Hidamari Shoji, a company where Ayame works. Ever since he began working in the same office, she could no longer think about nothing else but him. Miser or not, she was also a young woman. Of course, saving money is important, but she also wants love. Can Ayame, who used to be interested only in money, find something to believe in other than money? Look forward to the drama's heart-rendering episodes, and see how Ayame's "life as a miser" and love affair unveil.