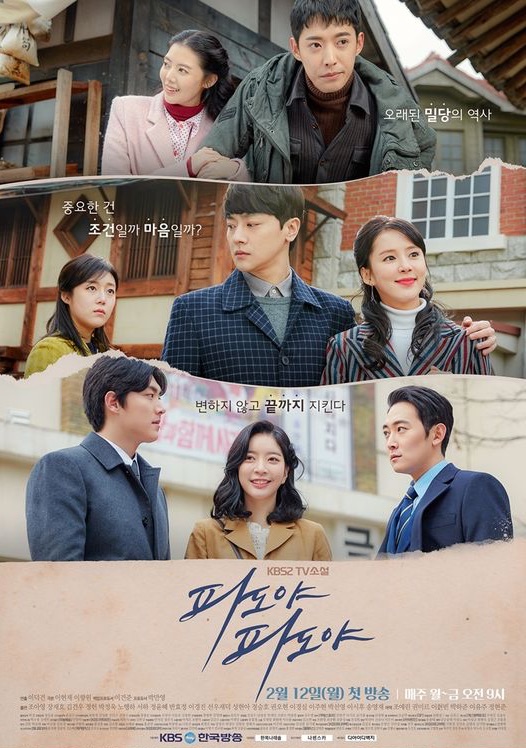 Due to the Korean war, Oh Bok-Sil’s (Jo A-Young) family have been separated and they have lost everything. But, not being daunted, they go through hardships and live with strength.

zombie Dec 21 2018 10:08 am im tv novel fanatic id watched almost all of them there are only a few that i can not find them online the best i like was samsaengi tho the story lines are similar what i like is that they are always staged in the 60s or 70s back when korea was poor so most of the dramas are about poor people trying to get a better life get succesful since they dont have money they can only offer their hearts i think similar stories happened for real in korea at that time i finished epi 65 and is picking up very fast after dragging a bit for long all the mysteries start to showing up which makes the drama very interesting i dont like the lead female singer but i like her opponent she is prettier and sings better i think im in love with her i still have the 2nd half of this drama so im excited and looking forward

Pammo Aug 08 2018 8:44 am I have periodically commented on this drama because it started out with a worth watching premise , then fell into the daily drama abyss of repetitive language, nonsensical responses to situations that require natural human emotions and lack luster acting by everyone except the baby that is sprawled on a blanket -- I am voting for actor of the year in a daily drama (smile). Granny has died -- I guess her contract ended or she had another offer. Now we have to guess when the writer will stop being a totem pole and actually write scripts that is imaginative or at least a conclusion to this train wreck of a whodunit drama. Since we all know "whodunit " let's move on with an ending to all these open ended storylines that were created. As viewers ,many of us don't drop dramas after investing 60 plus hours of our lives watching. But this is becoming worse that having your teeth pulled without anesthesia. Please end this soon.

Granny is dead. When will this drama end?. It supposed to be 120 episodes now we're at 123 and beyond. Can they wrap this up? It's dragging too long and it's getting boring. Getting tired of watching Soo Jung's aunt. She can't act and her character is terrible. It's just an annoying drama to watch at this point.

Nyuk Aug 03 2018 5:49 am 1. Really look forward to SY gives MJ a slap, for stealing her baby. 2. JH should divorce his nasty wife. 3. JH’s grandma is to blame for the missing baby. 4. JT and BK(se ra) should get back together. BK should leave Cha and MJ’s father go to jail for stealing the bag of gold bars.

Nyuk Jun 25 2018 2:27 am I am looking forward to find out whether Mi Ji really confirmed pregnant, or staged by her parent. It’s sad to see soon young sufferings. And Jo Hoon unable to make his mind about his life as a parent to his son min su What happened to Bok Sil’s father ?

Nyuk Jun 25 2018 2:23 am I am looking forward to find out whether Mi Ji really conformed pregnant, or staged by her parebf.

kyong Jun 24 2018 10:22 am enjoyable drama, sometimes a bit cliche but brings the nostalgia of good dramas past.

Dakchigo Jun 08 2018 9:04 am Seo Ha and Jang Jae-ho are stealing the show! I wish they could headline primetime miniseries. I also like Jay and Jung-heon to a lesser extent, but the others are weak and the Choon-ja character has been nothing more than comic relief.

Me Jun 07 2018 9:51 pm I thinks lead form this drama is Oh Jung Hoon and Eom Soon Young, their acting is good compare with original lead. #justmyopinion

sf Apr 09 2018 2:48 am Bok-Sil irritates me like hell. It doesn't exist at least one sequence in which she can smile. She is always frowning and yelling. Plus, the actress has a very annoying voice. Same for Roh Haeng-Ha. I don't know where did these actresses appeared from, but both are very annoying.

mama bear Mar 15 2018 5:05 am i really like the story, should be watched because it shows how a single Mom struggle and sacrificed to raise her children with a very domineering mom-in-law , each characters have well established atittudes based on their background. actors are good too. commendable drama.

Dakchigo Mar 04 2018 4:47 am I find Bok-shil a bit of an irritating spoiled brat, but it's understandable because the family was implied to be really well-off before they lost their fortune. It's also refreshing to have a daily drama protagonist whose character is so flawed. The eight-lead structure also attracted me. I have some problems with Ah-young and Park Jung-wook's acting, but I'm tuning in for the story.

Serena Feb 26 2018 6:49 pm I just started watching this and it's a very interesting drama thus far. I have to say though that I find the main female lead to be a spoiled brat. She makes everything about her, even when people around her are going through a lot worse. I hope as the series progresses (they are still kids now) she changes...