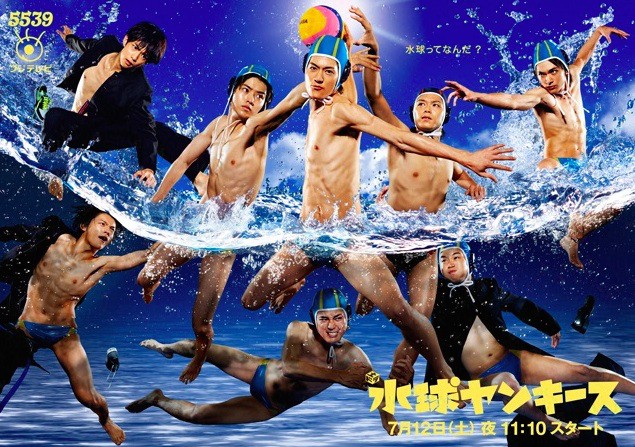 Naoya Inaba (Yuto Nakajima) grew up abroad. From his childhood experience, he thought “yankees” were the strongest heroes (in Japan "yankee" refers to delinquent youths). He was also influenced by the Japanese yankee manga he read from abroad. Because of his own experiences and reading manga, he is full of chivalrous spirit.

Naoya arrives in Japan to spend one year at a high school in Japan. He is transferred to a technical high school which is about to be closed down. Naoya admires the school because a yankee, who he admired as a child, went there, but he soon realizes that there are no real yankee like hero figures. There are only students who spends there days meaninglessly. Naoya is disappointed, but he happens to play water polo.

Nafeob akfsisgeo Jun 03 2018 3:36 am And everyone in this drama soon will become lead or at least second lead character of dramas or movies. Yoshizawa Ryo is so cute.

Tory Mar 29 2018 12:43 am This drama would have been much better if Nagisa had ended up with Ryuji instead of Naoya. That Naoya suddenly realized his love for Nagisa seems very forced for me. If Naoya must be with someone, I'd like it to be sensei, the one who understands and supports him the most. That said, it is best that Naoya has no love interest at all, so that he would be a more consistent character who is fully devoted to acting as an ally of justice.

Lily Aug 30 2017 4:14 pm Enjoyed the story. I'm in love with Naoya's character. He's just human. Positive and optimistic but can feel down once in a while. It wasnt that hard to bring him back up though. Ryuji's character is annoying at the beginning. He's a spoiled childish brat with universe huge ego who fret over a single loss. But I love him after Naoya changed him. I'd want a boyfriend like Naoya lol. But overall, enjoyable and recommended. I think Nakajima Yuto is a very talented actor. I hope to see more variety in the types of character he acted.

mai Jan 17 2017 11:17 pm I really enjoy watching this drama! So funny especially kohei, tomoki, and shinsuke XD And as always yamaken did a good job too! You need to watch this drama! ^^

Toki Aug 24 2016 7:20 am Idk why the ratings aren't that high ._. it got lots of ikemen.. maybe it's because of the story theme? tbh i just keep staring at the boys' face when i watch the drama xDD

Lumin Jan 16 2016 9:32 pm I finished watching it only in a day and now I want more!!! Every episode excites me so much!!! The drama is not only amazing but I swear it's totally motivating. You all need to watch this!

Newyork1993 May 02 2015 10:24 am Idk. I love yuto to bits but him acting as a yankee does not suit him one bit. It seems so forced i can't bare to watch him act so fake like. :( i've been wanting to watch a yutomylove dorama for years but i just can't with this one. Annoying accent!! Grrrr >.<

mikey Sep 28 2014 11:32 pm great show not only just for entertainment but teaches you real lessons that could be applied to your life. it definitely motivated me and i will remember the words from this drama for a long time.

can't lay my finger on it. even though the visual quality isn't as high korean dramas. it's always the japanese ones that touch me.

Dori Jul 20 2014 8:16 am Ryo's face and body language has strong expression in this dorama compare to lead actors. I am wondering if he will get important role here. I am used to see Yuto as good student, his Yankees role has not impressed me yet