Waiting in the Dark 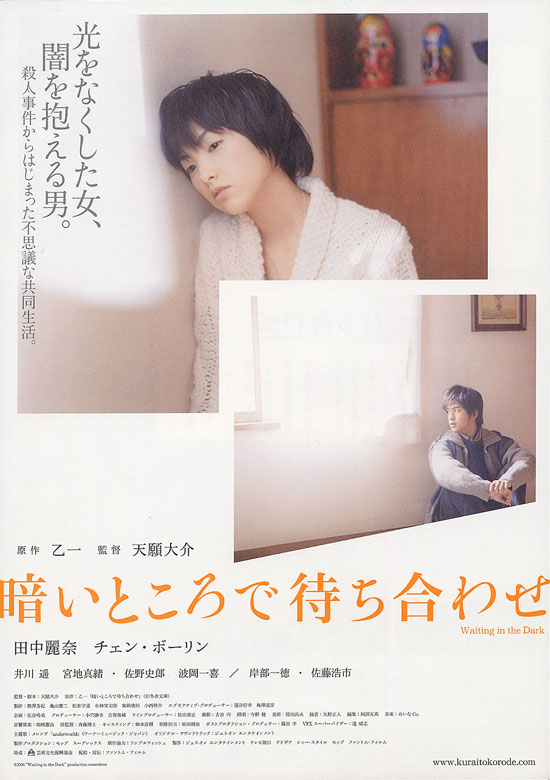 Michiru (Rena Tanaka) has recently lost her eyesight. Suffering even more, Michiru's father dies not long after she loses her eyesight. Now, all alone in the world, Michiru spends most of her day isolated in her home.

Akihiro (Chen Bolin) is a Chinese-Japanese immigrant who has had to deal with racism all throughout his life. He is now bullied at work by his older co-worker Toshio (Koichi Sato).

One day, at a train station in front of Michiru’s house, Toshio is thrown into the path of an oncoming train. The only person seen at the train stop is Akihiro. Akihiro frantically flees from the scene and manages to enter Michiru’s house without her knowing. After a few days, Michiru starts to sense the presence of another person in her home.

Sakura Aug 21 2016 1:54 am SUCH A HEARTWARMING FILM I AM SO IN LOVE. I put this off for awhile thinking it was boring but omg please watch. Chen is actually such a cutie and the girl is one convincing actress. And to top it off, the plot twist was good as well. Ahhhhh I just like the overall feel of this film. So glad I watched it.

Sam I Am Apr 25 2016 10:35 pm Watched it back in the late 2000s, now back again because I needed a reference to a functioning blind individual's lifestyle and still in love with it. I wouldn't necessarily consider it a romance more-so a "soft" crime-mystery with a side of budding friendship that could evolve if given proper time and care. Would definitely recommend for people who are willing to sit down and watch a quiet movie. Overall it's pretty hush-hush, but gives you a bit of insight to the issues the characters faced that are still current issues in society.

Justin Salazar Oct 30 2014 12:00 am Timid, yet energizing to the heart. The soft romance that slowly unfolds and the drama within it all. I wouldn't say it's an award-winning movie, but definitely a must see movie for people that wouldn't actually care how the romance is carried out with all the drama and within the story but just care that there is romance. <33

Clarkdale44 Jan 15 2014 12:20 pm Probably the most sweetest romance movie i have ever seen. Why in the present days there are not such types of movies...? I wonder!!! This movie touched my heart. Its outstanding.