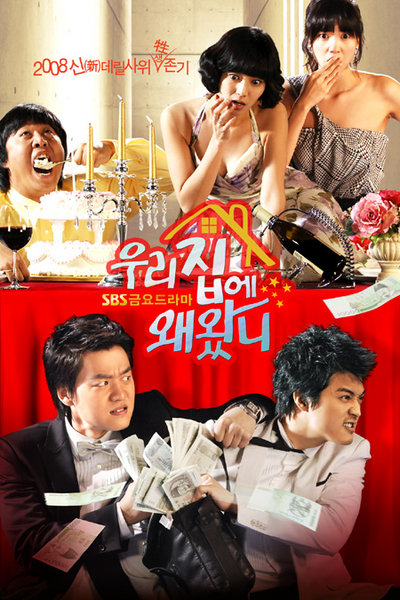 A wealthy man places an ad in search of a son-in-law! A suitor is found, but he’s one of a kind. The war has begun! Stakes are high as the hostile atmosphere turns violent. Who will come out victorious? A funny love story between a third-rate survivor and a foolish, modern day princess.

After breaking up with her fiancé, Lee Kang-jae (Kim Seung-su), Han Mi-su (Lee So-yeon) takes on a life of a rebellious night club hopper who frequents nightclubs every day. She reluctantly attends a party hosted by her father at his construction site and becomes unfortunately linked to Jo Gi-dong. The two bump into each other often by some twisted fate which worsens their relationship, eventually turning them into enemies. Jo Gi-dong(Kim Ji-hun) is a passionate young man who is trying to make ends meet in the difficult world. Just once, he borrowed money from dodgy men to fund his fake branded goods business. Little does he know that it was actually loan sharks who had lent him the money. To make matters worse, his mother has cancer and Gi-dong must care for his brother, Su-dong. Su-dong creates trouble, and to make up for his brother’s misdoings, Gi-dong must come up with 50 million won (50,000 US dollars) by the end of the week or he must be willing to give up his life. Just when he thought there was no hope, Gi-dong comes across a classified ad that may just end all of his troubles. “Heavily loaded family seeking son-in-law,” the ad reads. With nothing to lose and everything to gain, Gi-dong replies to the ad. Much to his surprise, he is chosen as the lucky candidate. Is it truly good luck or perhaps it’s bad luck in disguise? As he embarks on an “internship” as a son-in-law at the home of Han Jin-tae(Ju Hyeon), what’s shocking is that his new “wife” is Han Mi-su of all people! -- SBS

Ronaldo Jan 01 2014 2:25 pm A very nice drama story.... I like it even though I been surprised that from comedy it become melodrama. I like all the actors and actresses. The youngest sister is very pretty and she look like Kim Tae-Hee. About Kim Seung-Su who I hated most before as antagonist in Jumong, I appreciated his performance here and I'm thinking to watch his other tv series with comedy genre...good story, no much back stabbing or anger...good ending....

charity Aug 10 2013 12:04 pm this series catches most of the filipinos for its interesting and funny story