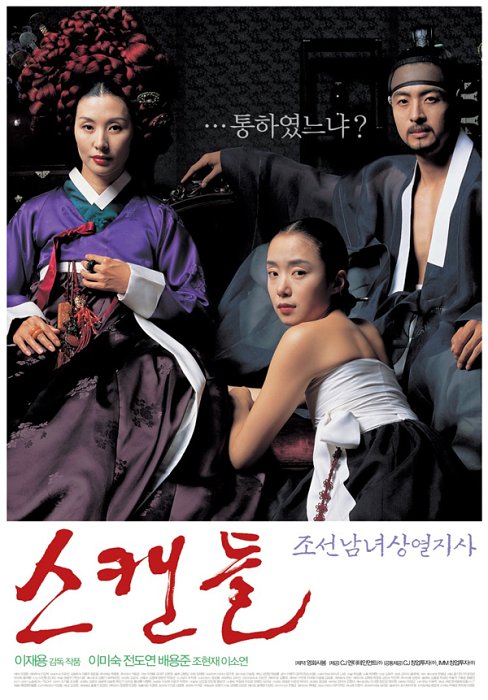 Set towards the end Chosun Dyansty period, Madam Joh (Lee Mi-Suk) lives as a devoted wife, but secretly she resents the restrictions placed upon her by society. Madam Joh has held many discrete relationships with other men.

Jo-Won (Bae Yong-Joon) is an accomplished scholar and skilled in martial arts. His real passion though is seducing other women. Madam Joh is his first love. Since that time they have engaged in high stake games of seduction and love. They both hide their true feelings for each other.

Madam Joh then sets Jo-Won upon the innocent So-Ok (Lee So-Yeon), who will become her husband's concubine. Meanwhile, Jo-Won's attention falls upon Lady Sue (Jeon Do-Yeon). Lady Sue is a devout Catholic and has remained chaste since her husband's death nine years earlier.

Fred Cordiano Dec 25 2018 11:52 am I enjoyed the movie Beautiful costumes ,a bit slow moving I happen to adore Miss Jeon So I may be biased

Migthy Thor Jul 12 2016 2:10 am Bae Yong-Joon is one of my favorite Korean actor and is actually one of the most respected and talented actor in Korea. I have actually watched almost all his dramas and movies (I hope he makes one drama again). I watched this movie because of him. This film is a good epic version of the Hollywood movie "Dangerous Liaisons" which starred John Malkovich, Glenn Close, Michelle Pfeiffer, Uma Thurman and Keanu Reeves. Then there was a re-make of this movie entitled "Cruel Intentions" and starred by Sarah Michelle Gellar, Reese Witherspoon, Ryan Phillippe, Selma Blair and Joshua Jackson.

All these three versions were unique and well written. Of course many would be disappointed or sad because of the tragic ending, but still it is one great novel. I would recommend that you watch all the three versions.

CONGRATULATIONS to the entire cast, crew and staff for a version well done!

Ronaldo Nov 01 2013 2:12 pm I find it similar to art of seduction but compare to the later which is romantic-comedy...this movie is melodrama and rated r that's why i feel more sad and sometimes hot. I've been surprised knowing that the leading man here is the leading man of popular lovely and sad drama series i watched early 20's " endless love, winter sonata". To be exact, I just watched it because I want to know how Mr. Jo Jhun Hae acted before since I just recently know him. The story was good but revolved only for 2 persons, the leading man and leading lady. It seems open ended because instead of killing herself for what happened to her first love, because of her bad doings, Madam Oh escaped and went on travel at the end. Furthermore, it doesn't shown what happened to the love story of Kwon in-ho and So-ok. Anyway, they are just supporting actor/actress here who served as a toys so I can say, it's still OK movie. It's more on love story rather than sex....good and worth to watch.....