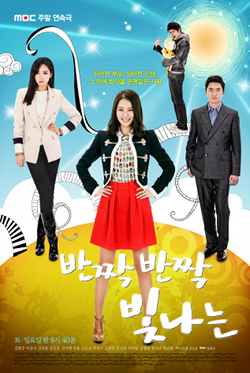 Han Jung-Won (Kim Hyun-Joo) is a 29-year-old single woman with a good educational background. Her parents are successful and she has one older brother. Jung-Won and her brother works for the family publishing company which her father runs. Jung-Won dreams of one day taking over the publishing company. She works hard and places her career before personal life. Even though her mother seems to favor her brother, Jung-Won's life seemed perfect, but then she learned that her parent were not her real parents. Two babies were switched in the hospital. Now she faces a different life and she tries to pull herself together to do her best.

Hwang Geum-Ran (Lee Yu-Ri) is a 29-year-old single woman with only a high school diploma. She has parents and one older sister and one younger sister. Her older sister is married and has a daughter. Geum-Ran's mother runs a small restaurant, while raising her and her sister. Her father is addicted to gambling and does not take care of family. Geum-Ran works in a book store. She wants to have a better life and believes the only way is to find a man able to give her a better life. Following her beliefs, Geum-Ran dated law student Soong-Jae (Jung Tae-Woo), but after Soong-Jae passed the bar exam he dumped her for another woman with a better background. After the breakup Geum-Ran became desperate and then she learns that her parents are not her real parents. Her birth parents actually come from a wealthier background. They can possibly provide her the life she always dreamed of ...

Delia Sep 01 2021 9:22 am Watching this drama fast forward way...its too long & dragging. Love the story and cast but 50 eps is too much. Since i have to watch the hateful character for a very long time. I like a healing or action drama or horror or romcom drama but this one i kept cursing a lot of people . The poor father with the gambling habit is the worst if i were geum ran i ran away from this family for ages. ..like the girl in the drama my daughter soo young( thats why i never miss even a second of this drama) the rich family mom simply too evil to jung won . Im glad that the real daughter & son soon will destroy their family business. Teach the parents the hard way for simply passing over something precious to the two idiot.

Emmy Aug 18 2021 9:23 am Like the leading ladies but sadly the leading men none my taste. Love the story but it will better if its shortened . It ways too dragging. Its kinda cruel the rich family treat their real daughter when she first approaches them breaking the news. Maybe bcoz its too sudden but still it hurts...something like that switch daughter happen in my country and im glad the family dont act that way. The girl met each other through fb n realized that the other girl looks similar to her twin sister. ( the family thought their twin girls not identical)

saranghae Nov 17 2020 3:57 am just started epi 7 omg omg i found a great drama its been great from the very beginning the story line is very straightforward no gimmicks or anything which i love it its very early but i think the climax of this drama happened here when the mom that raised her daughter with care and so much love for 30 years knew with a dna test that her daughter is not hers omg how dramatic can this be if this happen to anybody in real life all your world crumbles in pieces in 1 sec that poor lady was so devastated park jung soo as the mom was incredibly superb that i just couldnt help myself but cry me a river her scenes were so tender so warm perfectly done something that you can not practice or learn in school it just have to come from deep down very natural and she did it she nailed it first time I saw her was in first love (1996) cz there are many versions of the same title tho she was in a supporting role but still I fell and loved her since then first love is the best drama that ive watched to these days and my number one in my long list that started 6 or 7 years ago I think it would be impossible to make anything better than that cz it depicted and was made in bygone days in its peak it had 60% tv ratings which is unthinkable today more than half of all households in korea were glued to their tv sets awaiting for the outcome of each epi ok back to twinkle if the mom scenes acknowledging that her lovely daughter was not hers was so devastating next scene when the mom met her real daughter both acknowledging that they were truly mom and daughter was more devastating in the sense that for both their worlds became up side down but with the joy and happiness of a new world that was just about to begin for both

Jinjoo Feb 27 2020 1:28 pm this drama is one of my top ten list of all time, i love the relationship with editor song and jung won and both their acting was superb in every sense of the word! i hope these two actors reunite again in another drama, their chem was just unbelievable it's almost like i was watching a real love story! a must-watch kdrama! you won't waste your precious time watching this one! kudos to the cast esp the 2 leads plus the writer, direc/production! This is actually my 3rd time watching this (on my dvd) and still not tired of seeing it! :) I highly recommend this! 2 thumbs up waaay up!

MadTown-Mblaq ^^ Feb 13 2017 1:04 am Great drama 100%recommended, finally a drama where the lead actress is not a complete imbecil, weak and naive, but on the contrary, intelligent, positive and empowered, beautiful ending, all perfect, although I would have liked more that she stay with the university student.

MCheong May 29 2014 7:59 pm It's got to be one of the best! So heartwarming. Agree with sangjhoon. Worth watching again second time. Will surely do that!

MGuy May 29 2014 7:56 pm First time watching Korean drama...happened to be Twinkle Twinkle. It's got to be one of the best! So heartwarming. Agree with sangjhoon. Worth watching again second time. Will surely do that!

sangjhoon May 09 2014 5:10 pm awesome drama! loved loved editor song (kim sook hoon) and lovely jung won (kim hoon joo), they're super super couple together in this drama! all the actors did well & the script of this drama is one of the best! i'm now watching this for 2nd time since i am a latecomer on this one but i can't seem to get enough of this drama! 2 thumbs up wayyyyyyyyyyyyyyyy up, i highly recommend this if you haven't seen this yet! this will be on top of my favorite kdramas of all time!

Ihearyourvoice May 07 2014 8:48 pm You should be able to watch all episodes english subbed on hulu. If anyone is wondering.

hibiscus Apr 29 2014 8:36 am i agree with Paul, i really liked Lee Yoo ri in Ice Adonis or Yellow Boots, but in this drama she's loathsome....however, the whole series is a 2 thumbs up way up! luv the chem of Kim seok hyun with Kim hyun joo, best couple! i'm into epis 35 & can't wait to see the rest! this drama is so addictive!

chona Apr 29 2014 8:32 am i just started watching this drama & i'm loving every episode! kim seok hun & kim hyun joo are excellent in their acting! my only regret is that i wasn't able to watch this while it was airing! if you haven't seen this you're missing one of the best kdramas!

Paul Apr 18 2013 6:18 pm I preferred Lee Yu-Ri in Ice Adonis, where she was the angel and practically everybody else somewhat lower. In this drama, she is not an angel, and this is where I do not like her. I've only seen 14 episodes, but it seems to me she will get only worse as time goes by. I feel for the now displaced daughter. Otherwise, this drama is OK as it is.

ND Nov 01 2011 6:57 pm You can find all the episodes at hulu.com/twinkle-twinkle with English captions.

gaby Sep 14 2011 4:27 pm I love this show. Unfortunately I missd ep 53 and 54. I cant seem to find English sub version online! Can anyone point me in the right direction?