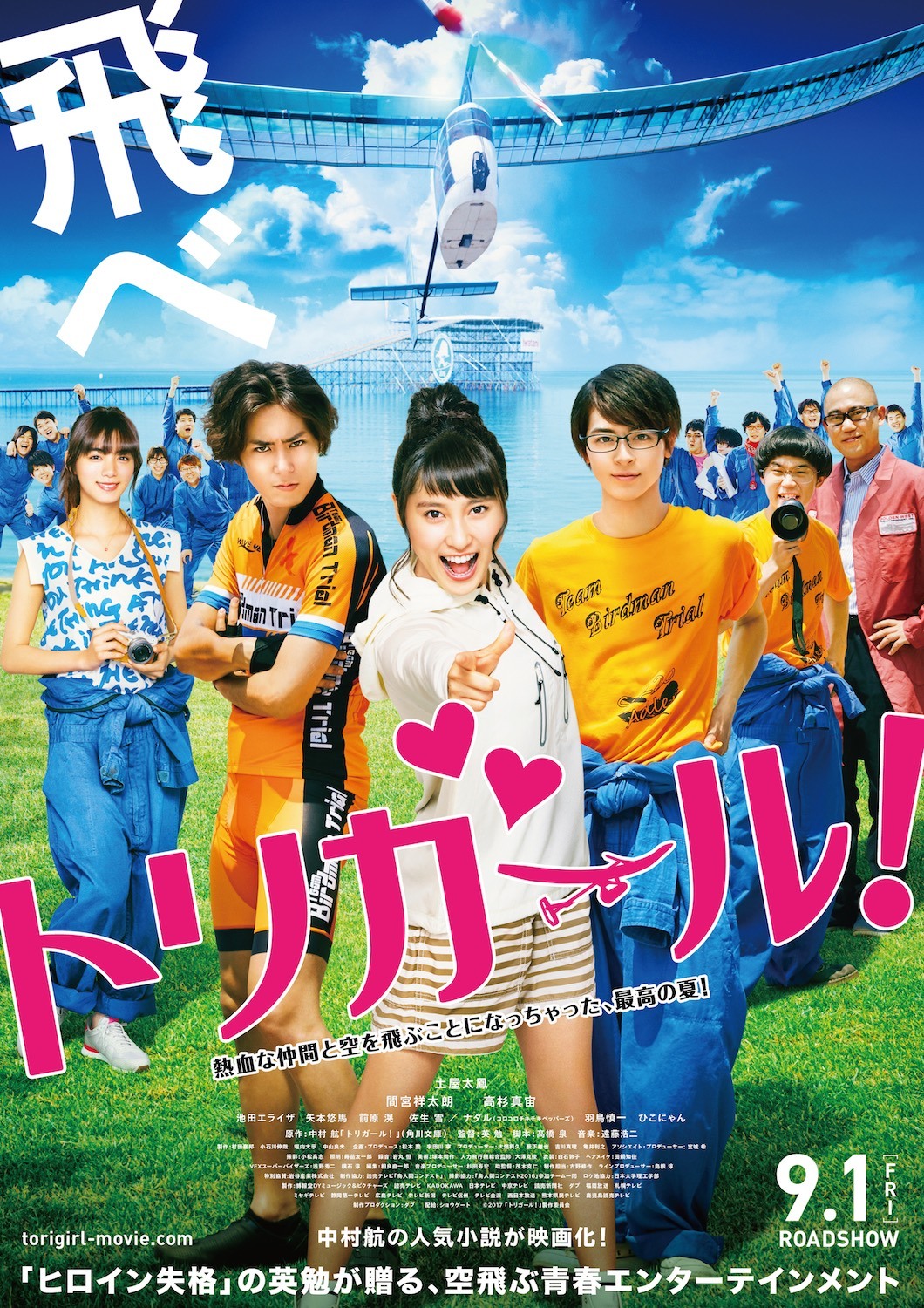 Yukina Toriyama (Tao Tsuchiya) enters a university of science after prepping for one year for her entrance exam. At first, she is shocked by the atmosphere at her school. She becomes attracted to senior student Kei (Mahiro Takasugi). Due to Kei, Yukina joins the “human powered flight” club. The club targets the "Tori Ningen Contest." Yukina wants to partner with Kei to fly in the sky, but she is partnered with Sakaba (Shotaro Mamiya) whom she does not like.

someone May 03 2020 6:00 am I'm not sure if anyone will see this comment, but this movie is amzing. I enjoyed it so much. But does anyone know the music in film? Not any song, but that music whenever they were riding bikes. I can't find it anywhere...

great movie Mar 05 2020 1:16 pm I really like the movie, even if I think the ending is just a little bit disappointing but I wont spoiler it. But the plot twist is very unique and the actors are also very good. I never related to a protagonist this much like with this one! I really like the characters of the film, everyone is special and no one is the same. A really must watch!!!

Pirate95 Feb 13 2019 7:11 am Lol. Unique ending for a romcom. I almost wanna spoil it, but I won't. Just watch keeping in mind that Japanese movies and dramas don't adhere to typical romantic endings.

Saying that, it was a good, ligtht hearted comedy. Enjoy the bickering and crisp dialogues. Also Elaiza and Tao look so cute I could watch all their movies.

Not too much room for character development but it's not needed for the plot. The most hilarious part was the actual flight of their plane. Twists one after the another. I wish they had given some more hint as to what happens to Elaiza's character.

A great movie. Definitely worth watching.

Jem Jan 09 2019 10:53 pm Any actress can play a lame shoujo heroine but only TAO TSUCHIYA can play amazing hysterical poisonous tongue crazy Yukina Toriyama that role is major fairy-tale made for her this amazing movie wouldn't exit if she wasn't the star of the show plus Shotaro Mamiya is her lost soul match XXDD

Sakaba Aug 18 2018 2:54 pm This is a really awesome romcom movie. I repeat! I laugh so hard that it hurts my stomach. It is different from other romcom movies that I had watched. That Sakaba guy is really twisted guy that kind of gangster and gloomy yet still can listen to anisong and read Haruhi Suzumiya manga is something I don't encounter in any romcom movie. Plus, I didn't expect the plot twist.

april Apr 07 2018 10:58 pm I definitely like this movie a lot! It made me genuinely laugh and I found myself just smiling at the screen like an idiot haha All in all a pretty good movie :)

Mina Mar 31 2018 11:00 am This movie is so funny! I really love how the story was written. Kudos to all the actors for a job well done! This is one of Tao Tsuchiya's best act so far (in my opinion).

kira Mar 27 2018 5:55 pm omg this movie is so funny. I can't stop laughing. Also the storyline is great two. I love the chemistry between all the characters. But does anyone know the different songs they used??

Jewel Mar 25 2018 11:13 am This is must watch movie seriously! I love the plot and the characters! It's so refreshing and funny too... this movie gives you emotional feelings about passion and dream. Love it so much!

Nafeob akfsisgeo Mar 11 2018 10:57 am Must watch drama. I really recommend this drama. It's so funny with good pace and story plot. Mariya Shotaro is really cool here and Tao Tsuchiya is cute as always.

Nozomi Feb 01 2018 2:56 am This movie is so hilarious! I laughed so many times. The cast did amazing work! The soundtrack also good. I didn't prepare for Secret Base from anime AnoHana will be played in this movie, this song made the moments so 100% better.