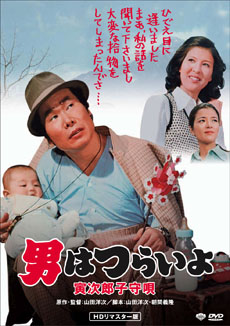 Tora-san has an illegitimate child? To everyone's surprise, he brought a child back to Shibamata. When everyone in his family decides to raise the child as a family member, they find that he was only an abandoned child that Tora-san found on the street! At first, Tora-san has no interest in taking care of the child and he lets his auntie and sister, Sakura, to do the job instead... until he meets the beautiful nurse Kyoko (Toake Yukiyo). He tries all the ways he could, including taking good care of the child, in order to get her attention. However, a bearded poor conductor in Kyoko's choir stands in the way.