Too Young To Die! (Japanese Movie) 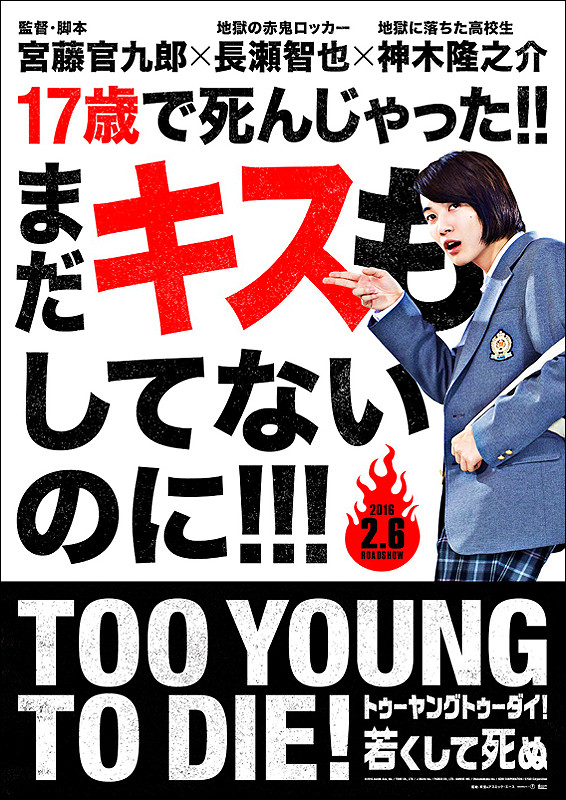 High school student Daisuke (Ryunosuke Kamiki) has a crush on classmate Hiromi. On the way to a school trip, the bus with Daisuke has an accident. When Daisuke wakes up, he finds himself in Hell. He asks himself "Why only me? I'm too you young to die and I've never experienced a kiss." Then, Killer K (Tomoya Nagase) appears in front of the confused Daisuke. Killer K leads the rock band Heruzu from Hell Agricultural High School. To return to the living and confess his feelings to Hiromi, Daisuke's hell rounds begin under Killer K's special training.

I was genuinely surprised about how much I loved it! It's fun, quirky, and just an absolute delight.

Zafay Oct 31 2019 11:19 am No minute waste while watching this movie. One of the freakiest and interesting movie I ever had. So much fun and crazy at the same time. Highly recomended!

bakoi Sep 22 2019 10:50 am I had no idea what to expect. What a fantastic movie. Hilarious, odd, and surprisingly touching. The whole cast gets to contribute without anyone really stepping over each other.

Special credit goes to Kyono from Mad Capsule Markets for the incredible soundtrack.

WryTom Aug 03 2019 11:24 pm This was the weirdess movie I ever watched. Indeed a movie with new and refreshing idea! Highly recommended!!

Jesse Jan 21 2017 5:18 pm This movie is really good. The songs are awesome. I loved it. The acting id top notch. Highly recommend

Can't wait for it to come out on DVD or Blu-Ray (that will play in the US!) I've been telling everyone about it.

filmbeats Aug 04 2016 9:40 am I had little to no expectations but this ended up being one of the most entertaining movies I've seen this year and possibly ever. Quite funny and really random but in a fun way. Killer K is an awesome character.

dororochan Aug 03 2016 11:07 am anyone know when the dvd/bluray will be released?? i'm dying to see this movie.. found the soundtrack songs on youtube, now on repeat on my playlist <3

Emi Apr 25 2016 11:27 am Kamiki's role here is so funny and refreshing! I'm glad I always get to see Kamiki's different sides in his acting career. Definitely watching this! Fightoooo!

dororochan Nov 27 2015 4:23 am I'm really excited about this. i love kudo kankuro's drama "11nin mo iru!" with Kamiki in it, and Nagase Tomoya is a great actor, and this movie is his comeback. The trailer looks fun, crazy fun, as it is expected from kudo kankuro.

lolololol Oct 08 2015 1:07 pm I was waiting for another Kudo Kankuro and Nagase Tomoya's collab!!!!! Here it is!!!! Wacky is the trademark of Kudo's work and Nagase is the perfect cast for it!!!