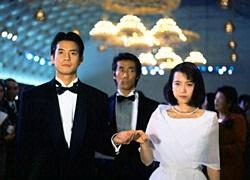 A pretty but poor young girl meets a rich handsome young man. Despite the differences in backgrounds, they fall in love… This beautiful Cinderalla story will take you to the world of your dreams and bring hope and faith to all. Yukiko Matsui works as an accountant for a food company. She came to Tokyo 3 years ago from the small town of Noto where her parents run an inn. Living alone in a humble apartment in the big city, everyday is plain and uneventful. A fairy tale or a romantic encounter was only a far-away dream.One day, Yukiko goes to the station to meet her brother Kikuo who was visiting Tokyo for the first time. At the station, Kikuo is mistaken by Masashi Takagi as his new chauffeur. Realizing his mistake, Masashi starts to walk away in the rain when Yukiko offers him her red umbrella. Their eyes meet and Masashi feels a warmth in his heart as Yukiko reminds him of his long-missing sister. Little did they know that this fateful encounter was the beginning of a fairy-tale-come-true. Afterwards, Yukiko soon becomes aware of the fact that they have so little in common. Masashi’s father is chairman of the prestigeous “Takagi Corporation” and Masashi himself is to take over his father’s business shortly. When Yukiko and her brother Kikuo are invited to Masashi’s party at a luxurious first-class hotel, they keenly realize that they obviously do not belong there. Masashi’s secretary pushes them out of the party room. “We were not meant for each other in the first place...” Despite her sincere love for Masashi, Yukiko makes the sad decision to leave him. Meanwhile, Kikuo falls in love with a bar hostess who turns out to be Masashi’s missing sister. Masashi on the other hand is forced by his father to marry another woman, in benefit of his company. The highlight is when Kikuo storms into Masashi’s wedding ceremony leading to an unforgettable dramatic final episode.

peaches Dec 18 2011 8:25 am Can someone please upload this drama on youtube? or create a torrent?

peches Oct 21 2011 6:13 pm I love this drama. Can anyone tell me where I can buy a dvd set with english subtitle? I saw the Taiwanese version of this in 1995... I'd like a copy in original Japanese language but with english sub.